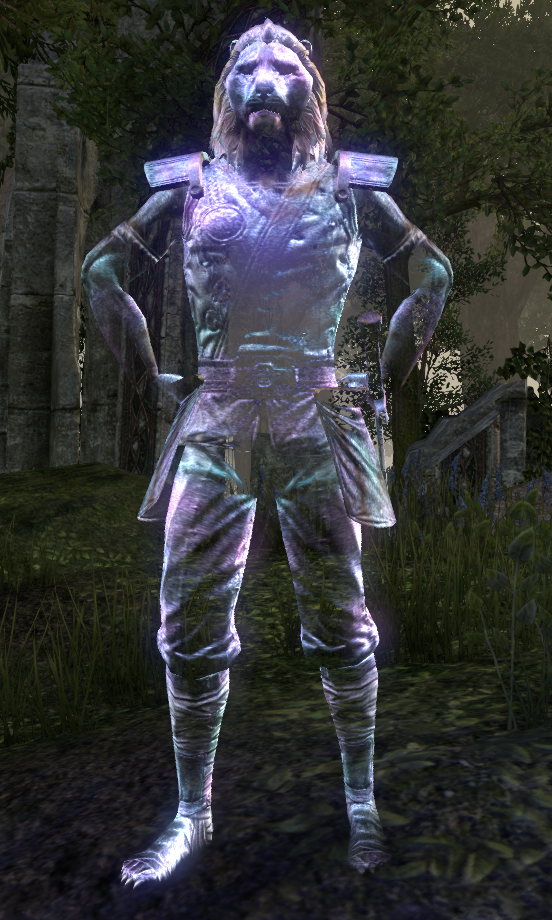 One day, nearing the end of Evening Star, while the people of the land were preparing for Old and New life festival, the King of Senchal – who was the King of all Elsweyr during this phase of the Ja-kha’jay – left his palace to go for a walk. The King was a gruff and unfriendly Cathay-raht, smelly and fat, with a mane so white and long it obscured his face, but beneath his fur was a perpetual frown, for he hated this time of year. He despised revelry, celebration, and happiness, but most of all he hated children, for their constant smiling and laughing and playing and running annoyed him to no end. The Khajiit of Senchal knew this well, and always told their young to stay away from him when he went on walks, but kittens often disobey their parents. During his walk, he heard many things – laughter, music, song, bad jokes, and above all else, there were children doing all of this and more, and it infuriated him to no end. He knew it would only grow in strength as the year came closer to its end, and so he knew he had to do something about it.

The next day, all of Elsweyr learned by Pahmar courier of the new law instituted by the King of Senchal – all Khajiit under 15 years of age would not be allowed to attend the Old and New life festivals. The festivals were always a highlight of the year, chock-full of music and games and many activities for those of all ages, and so the children were deeply saddened by the news. They cried to their parents to let them go anyway, but they knew they could not disobey the king’s new law. The children kept crying and crying and cried some more until their parents had no choice but to plead to the Mane to help them before they flooded their homes with their tears. The Mane dusted off his tomes and read them thrice, but the pages betrayed him – he could not overrule this law while the phase of Jone and Jode was in the King’s favor, only when they were not, but by then the festivals would have already since passed. He threw the books to the floor and left the palace, determined to help his people regardless. To change the law he would have need of one skilled in breaking it, and so it was obvious who he would need.

The Mane sought out the infamous Rajhin the Footpad, wanted in every city of every province across Tamriel for every possible crime related to thievery – and then some more. He knew Rajhin could not be found unless he so desired it, and so the Mane went alone, without guards, to the den that he was known to frequent. Rajhin appeared before him as if from thin air, thanks to the Ring of Khajiiti.

‘For the Mane himself to walk into Rajhin’s den alone must warrant something dire. What would you ask of him?’

‘The King of Senchal has forbidden children from attending the festivals New and Old, this one asks that you change his mind through any means, and in return, you will be granted pardon throughout all Elsweyr of your crimes.’

Rajhin the Footpad considered this offer, and, if only for his own amusement, agreed to help – although he knew a pardon would be nigh pointless, for he would never stop being a thief. He left for Senchal immediately, slipped past the guards of his palace unnoticed, and approached the king with a calmness as if he were summoned to speak to him.

‘Why does the King abuse his power, to forbid children from celebration? They will hate you for this, and you will grow old and lonely and hateful and always regret this unless you change this soon – preferably now.’

‘Children grow to become adults eventually, no? At least, some of them…Will they respect you when your time comes to pass, and they remember only the old and mean king who forbade them from having fun in their precious youth?’

‘While the Ja-kha’jay favors this one, he does not have to answer to anyone, especially not thief scum like you, Rajhin. Guards!’

Rajhin was gone before the King could finish the syllable, and the search for their quarry returned unsuccessful, despite Rajhin being in the same room as them the whole time – such was the skill that Rajhin possessed. He explored through the palace for ideas, and upon finding a large vault containing what seemed to be many toys he confiscated from children over the years, he hatched a plan that was sure to change the king’s stubborn mind. He collected all of the toys and threw them in a bag, and then tossed the heavy bag outside a window on top of some poor unsuspecting servant. Rajhin then used his ring and snuck up close to the King of Senchal during his dinner-feast, and stole his mane right from under his nose. Rajhin picked up some spare red clothes the king would sometimes wear and used this all to create a disguise to look like the King of Senchal, fit with fluffing to match the king’s plump appearance.

Rajhin then returned to the bag of toys he stole and dragged them to the king’s private senche-tiger drawn carriage, and pulled it in the back and told them to run. The Senche-tigers pulled and pulled, but the weight of the bag was so heavy, it would only move very slowly. Rajhin looked for more Senche-tigers and tied them all together so that they could pull the weight of the carriage. When Rajhin told them now to run, they ran so fast Rajhin could barely hold on!

And so it was that during this night of the 24th of Evening Star, Rajhin broke into every house in Elsweyr – with lockpicks, climbing through windows, through Alfiq-doors, and left behind a toy for every child. He made a lot of noise so as to be seen by many, and come morning time, Rajhin returned to Senchal, and returned the mane of the King of Senchal before he woke. He tipped off the guards to notify the king that there had been a thief in the house and showed the guards the empty toy vault.

Rajhin then left outside, where a crowd of Khajiit was gathering, with angry parents and happy children. The King returned the look of the parents, and shouted out to the crowd ‘Who here is responsible for all of the thefts and trespasses committed last night?’ and Rajhin responded ‘Why, King, do not be modest – you know it to be you, you were seen by many last night by children everywhere – you were so generous, you gave them back all of their toys!’

Before the King could respond, all of the children of Elsweyr crowded around the King saying cheers and thanks and hugged him, and then lifted him into the air and carried him like a palanquin. So it was that the King of Senchal finally knew happiness himself, being around so many happy faces that were grateful to him, he forgot what he was angry about in the first place. So generous and happy was he that he changed the law he had made earlier and allowed for those of all ages to attend the Old and New Life festival, and instead he made a new law – that on this day every year, there would be a holiday of gift-giving and thievery.

On the 24th of Evening Star, stealing would temporarily not be a crime – but if you were caught in the act you had to give it back, and on the 25th of Evening Star, everyone would give what they stole to their children, their family, their friends, and lovers. Future children were brought up on stories that the King of Senchal, even after death, returned from the afterlife on the night of the 24th of Evening Star, wearing once more his red clothes and white mane, and riding by Senche-drawn carriage to give his own presents to little children, like those who cherished him during his life. The children often left behind Milk and Moon Sugar cookies for him, because they figured even dead, he must get hungry and thirsty sometimes. Sometimes they would not be there when they woke up, and they would claim to hear the distinct sound of many Senche-tigers, and lockpicks being used as their house was being broken into. The parents knew the truth, of course, but they knew too, what it was like to be young.

And that was the story of how Rajhin stole Saturalia and brought it to Elsweyr.