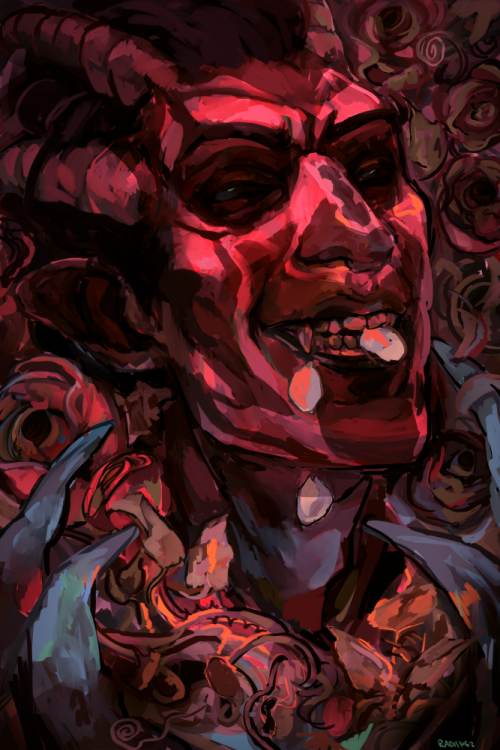 I shook the Prince’s hand. He beamed at me, his other hand clutching a comically large tankard of what I assumed to be ale. When I released my grasp, I found myself holding a similar (albeit smaller) tankard with a sweet-smelling liquid within. I drank. I drank deep. The dew that flowed was fluid ecstasy, smooth as a velvet baby’s arse, and it filled me with the warmth of a lover’s kiss at sundown.

“So tell me,” the Prince said, as I peered in astonishment into the depths of my new mead-filled best friend, smacking my lips, “What’s your fancy?”

“Then you’ll feel right at home,” Sanguine chortled. His tankard had become a dazzlingly colorful pipe, loaded with complicated tubes, chambers, and a bowl filled with an unidentifiable substance. At the tip of a finger danced a brilliant red flame, which the Prince dipped into the bowl.

He inhaled deep and pulled the pipe from his mouth. As the smoke poured from his pierced nostrils and twisted grin, it wrapped me in a cloak that smelled of sugared pastries, candied fruit, and embered aged alder and hickory.

My eyes fluttered; my heart did likewise. When I opened my eyes, I was in the middle of a giant tavern, the kind that Jarls and High Kings and Emperors could only dream of. Its walls were lined with cask after cask of the finest liquor and spirits, the tables were laden with fine powders, pipes, nuggets, and leaves. Dotted regularly along the miles-long tavern floor were gargantuan spits and iron grills, piled high with tender meats glistening with the most sumptuous of colored glazes. Jovial music flooded my ears, its source indeterminate, and I couldn’t help but tap my toe. Between (and in some cases on top of) the tables were countless writhing bodies, lost in the revelry of song, dance, and drink. Some were dancing, others were caught in the throes of wildest passion.

In innumerable thinly veiled chambers, I spied the comeliest, shapliest wenches in various states of undress, caressing, biting, and sucking each other, betraying shameless moans and giggles that tightened my thighs. They beckoned to me in unison. How could I choose? The maidens of Sovngarde couldn’t hold a dripping tallow candle to the shapes of these lust-filled fillies.

I glanced over my shoulder to find Sanguine lounging upon an enormous throne of cushions, tended to by the most voluptuous of half-naked (and some more than half) handmaidens, who offered him plump grapes, juicy haunches, and horns of ale. He was easily ten times his previous size. He grinned again at me and gave a gesture of approval, as if shooing me away. I needed no more permission.

I passed through the tables, dancing my way through the crowd, and made a bee-line for the spits. I couldn’t decide where to start, so grabbed the first that I saw–a whole roasted chicken dripping in its own juices. I gripped the fowl by a leg and elbowed myself to the towering racks of merry libation. I grabbed the first tankard I found, forgetting where I had put the other one, and filled it to overflowing with the liquid gold of hoppy, malty excellence. I ripped off a bite of chicken. Chewing, I approached the nearest alcove, where, beyond silken curtains, lay three of the most beauteous women I had ever laid eyes on. One was a daughter of Skyrim, much like myself, with braided blonde hair tickling the small of her back. Another appeared to be Imperial, with short auburn hair and tits like you wouldn’t believe. The last was Redguard. Exotic. I like exotic, not to mention that she had an ass to make Dibella weep. Had I picked the best women by happenstance? Or had the best women come to me? In all honesty, it didn’t matter.
I dove into the soft linens of the lovebed I would soon build, and the three women wrapped me with their bodies.

For hours innumerable I ate, drank, fucked, and smoked. I had never felt such joys as my head floated well beyond the distant ceiling leagues above. The women allowed me to put myself in places that would, back home, make me blush. These saucy whores had no shame, engaging with myself and each other for hours on end. And still I ravished them more. The drink hit my head and my wits were lost. Still I drank more. The savoury pleasures filled my gut to bursting. But still I ate more.

After what had seemed like days, I was at my limit. I needed rest. One of the women, the Redguard, moved to climb atop me again, but I held her at bay.
“Let me sleep,” I groaned, stale beer dribbling down my chin and pork sauce rising in my throat. She pushed my hand aside and attempted to mount me again. I pushed her back again, this time harder. “No more.”
She grinned a devilish grin. The others, too. Had I not planted my seed a hundred times in such a short span already, I’d find it highly arousing. But my stomach ached, my head pounded, and my eyelids felt heavy and weak. The two other women held me down while the Redguard mounted again unimpeded. My smaller half was unable to perform. Her face twisted into a nightmarish guise.

“If you won’t perform, we’ll force you,” the three said in unison. “This is what you wanted.”

One of them slapped me in the face. I couldn’t tell which one.

Before I realized what had happened, another of the whores was pressing a rabbit haunch into my mouth.

“No, I don’ want it, I ent kiddin’,” I growled, spitting out the meat and bone. I was starting to get angry.

“Have some more, my love,” the Nord insisted. I turned my face away and was promptly slapped again.

“You need a drink,” The Imperial giggled mischievously, pressing another tankard into my face.

The woman astride me was now rocking her hips violently, which in any other circumstance I might have enjoyed. But with my stomach full to the brim, tired of the smell of alcohol, it only made my nausea worse. I tried to get up, but the women were of surprising strength. The scent of the rabbit filled my nostrils and my nose was quashed by the fresh tankard.

I turned my head and erupted, bile and meaty chunks coating the love-stained cushions. To my surprise, the retching wasn’t enough to make them cease. Still, they slapped me, pinched my genitals, pushed food into my mouth and drink down my gullet. I tried to yell out in protest, but could not. I choked and vomited again. The meat and wine kept coming, the gyrating at my waist began to hurt as my skin chafed.

Above me floated the sallow face of Sanguine, who took a draught from his tankard.

“Why?” Sanguine cocked his head at me quizzically. “We had a deal.”