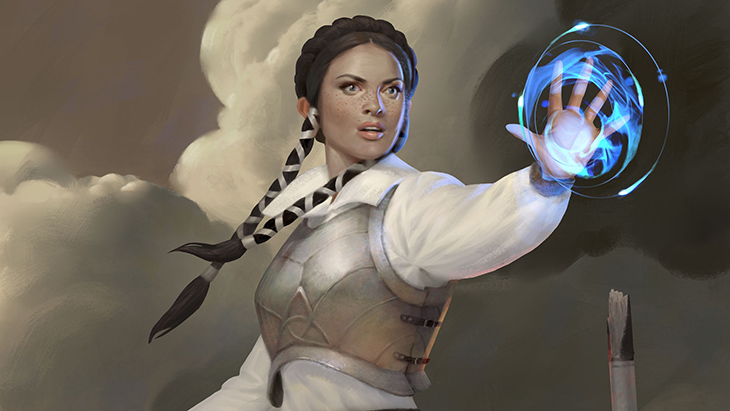 The gods of High Rock are many, but each of them is important. Those that are worthy of our devotion are the Eight Divines, and Magnus their kinsman, Phynaster his pupil, and Y’ffre of the Earthbones. They are the Tribe of Anu.
Akatosh, the three-faced God of Time and the King of Kings, is the chief of all the gods. His visage is of Dragon, Elf and Man, for he is the protector of everyone. He is the Eagle who writes history, and the Hourglass that gives it meaning.
Mara, the Goddess of Love and the Wife of Akatosh, brings together what was divided, mends hatred and ends strife. It is she who birthed the Elves into being, and the one who applauded the loss of their purity. She finds Love even in unlikely places, and gives it even to unlikely people. She is the She-Wolf that guards her family, and the Ring that binds those who want bondage.
Stendarr, the God of Mercy and Justice, is the judge of all crimes. He is fair and just, and gives everyone an opportunity to attone for their sins, through work and devotion. Those that do not repent, and continue to cause suffering, will get their fair punishment. He is the Gavel which closes the trial, and the Chalice from which freedom spills out.
Dibella, the Goddess of Beauty, Art and Lust, rewards good people for their good deeds.Those that deserve pleasure should partake in it, with Dibella’s blessing, but those that do not deserve it, she abandons. She is a younger sister to Mara, and her blessing brought Men and Elves together to create the Breton people. She is the Moth whose silk garbs the worthy, and the Lily adorning the hair of the innocent.
Zenithar, the God of Diligence, is the god that will always win. There is nothing that his followers cannot accomplish, if they set their mind to it. He guides their hands and minds to create wonders, which the weak-minded would think impossible. He is the Star overhead, and the Anvil for minting.
Kynareth, the Goddess of Nature, is the shepherd of all birds, fish and wild beasts, and the guardian of forests, mountains and meadows. She is Friend to the Earthbones, Queen of Wind and Sky, and rains are her tears. She weeps over the fate of Men, her children, who are easily swayed by Sheor the Bad Man to commit acts of violence. She is the Mother Hawk, the Wife that broke free from her husband.
Julianos, the God of Wisdom, is the keeper of knowledge. He has the insight to know what secrets are too dangerous for mortals to know, and what is safe to share. When people need his inspiration to do good, he is there to help, but when someone misuses higher knowledge to do harm, he will stop them. He is the Owl of Secrets, the Hunter of the Hare.
Arkay, the God of Life and Death, stands at everyone’s deathbed. He chases off demons that prey on innocent souls and opens the path to the Hills of Royalty. He is the Snake that finds the way to Heaven, and the Wreath at the funeral.

These are the Eight Divines, the pillars that make the world livable. Their homes are the wanderers of the night sky.

Magnus, the Spirit of Magic, resides in the Sun. He is the brother of the Divines, but did not become one of them. He chose to return to Aetherius, the home of all good gods, and let a small part of it shine through the Sun and Stars onto the world. This gives mortals the taste of the gods’ power, in the form of magic. Magnus himself taught the people of High Rock in the ways of magicka, so they would have the tools to protect themselves against invaders who are stronger in body and whose ferocity is fueled by Sheor the Bad. He waits for the souls in Aetherius, and greets them upon their arrival. His bright rays of light form the skies of the Hills of Royalty. He is the Eye that sees all flaws, and the Staff that mends them.
Phynaster, the Spirit of Health, was once just a mortal Elf, but his diligence in studies impressed Zenithar, his good heart and desire to help endeared him to Mara and his talent for magic attracted the attention of Magnus. They raised him up, in life, to join Magnus in Aetherius as his helper. Ever since, he teaches people in the ways of healing magic and healthy lifestyle. His work lengthened the lifespan of Bretons as well. His is the Short Stride, the Path to permanence.
Y’ffre is the Greatest of the Earthbones, Storyteller of the World, and Spirit of the Forest. If Kynareth is the air filling the lungs of beasts and rain that sates the thirst of trees, Y’ffre is the ground beasts walk on and trees take root in. Both are what makes nature whole. Y’ffre’s song can be heard in ancient places, at wyrd trees, deep lakes, spots where the hand of Man or Elf is yet to do any harm. Nature’s mysteries are open to those who hear the song and sing it along, but not to those that would change its harmony. He is the Tree upon whose branches songbirds sit, and he is the Songbirds, all of them.

Earthbones great and small followed the example of Y’ffre. They make up everything that is – stones, wind, water – they nourish beasts and plants, and mortals too. Upset them and they will bring you calamity, not because they are evil, but because you are. They are the World.

These are gods that are worthy. They are the Aedra, Ancestors of Men and Elves, and creators of Beasts and Nature. They stand in opposition against the legions of Sheor, the Bad Man, and his allies among the demons, the Daedra. They did not create the world of their own volition, circumstance pressed them, but after they did it, they stayed, for their love of us, their children.
The world was made when Sheor the Bad Man locked himself and the rest of the gods away from Aetherius, their home. In the new place, there was nothing, and the gods would perish in the nothingness, if there was no world to nourish them. Only Magnus was able to find a way back, but was not strong enough to take any others with him. Y’ffre and the Earthbones sacrificed their bodies to form the world, so the other gods could survive, but Sheor wanted to make this world his. The good gods did not want this to happen, the Bad Man already took their home from them once. And so the gods took up arms against Sheor and his horde of demons, and were victorious. The demons were thrown out of the new world, into Oblivion. Sheor was chained to the Adamantine Tower, the home of the gods, and stood trial. The judge Stendarr sentenced him, justly, to death, but a spirit like him can never truly die. And so, his heart was cut out of his chest and thrown into the sea, where it could harm no one. Sheor’s withered, dead body was raised to the sky as the two moons, as a reminder for anyone who would again steal from the gods. 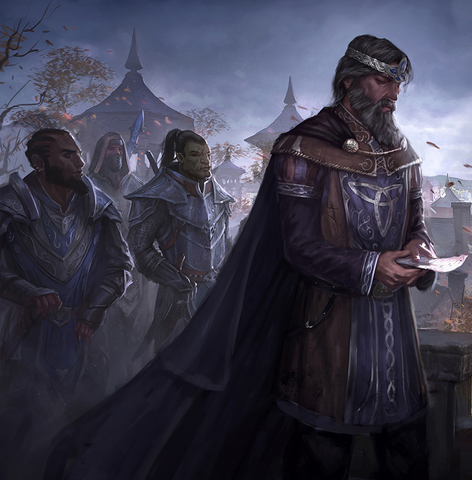 Then the gods sat at the Adamantine Tower, and decided to be the eternal guide of their children, the Elves that were born of Mara, Men that were born of Kynareth and Beasts that were born of Y’ffre. So, they ascended to the heavens, not their former home Aetherius that was once again open to them after Sheor’s demise, but the skies of the new world, as wanderers in the night sky. They became a part of the world, sacrificing themselves so their children would not be lost on their path. The remnant shadow of Sheor still persisted, possessing Men to do evil deeds, and the demon princes could still reach the world from beyond the veil of Oblivion. The Eight Divines, those wandering the sky, are the guardians of this world against these threats.
To reward their children, they opened a way to Aetherius for their souls. Magnus stands at the door, greeting his nephews and nieces in his home. He knew what the people of High Rock value, so he built a place of rest for their souls, tailored for their needs. The heaven of Bretons is called the Hills of Royalty. It is a place where all good people can find a hill for themselves and become kings. The not-so-good people, who were not bad enough in life to deserve Oblivion, are still allowed in the Hills of Royalty, but not as kings. They will become the servants of the good souls who became kings, which is still a much better existence that anything in life or in Oblivion. And despite there being many kings, the Hills go on endlessly, so there is no need for war and rivalry. Old friends can meet as kings that are equal, and feast together, for eternity.