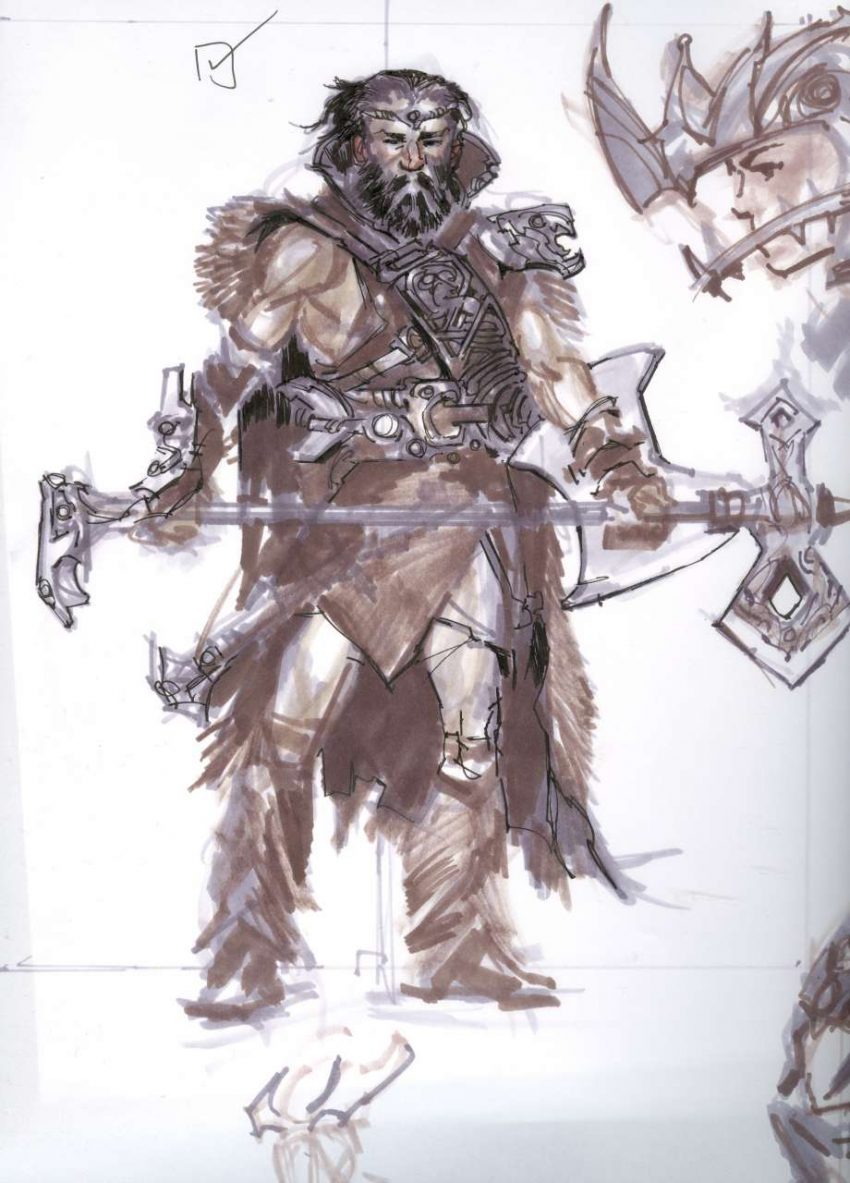 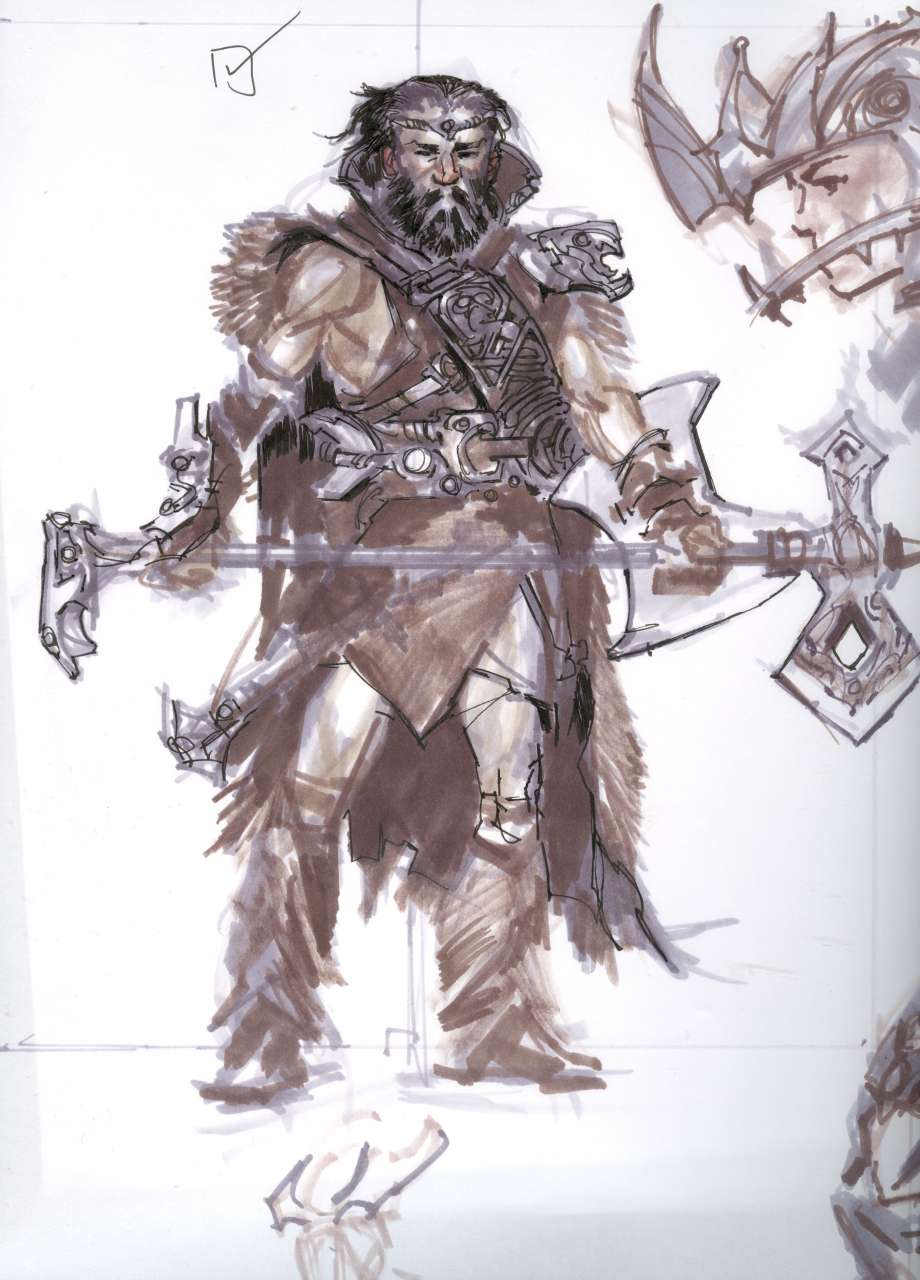 My Lord pours more wisdom into my head and has revealed the origin of that most brutish of creatures known as the Nord. Their ancient tales describe an exodus from some cold land to the north (Admora or somesuch) wherein they made their way to Tamriel. Lies! It’s now known that the little goblin-ken known as Rieklings (which can be found on Saltsheim- named the ‘Island of Salt’ after the Skaal’s perverse obsession with the substance which they use for preserving the corpses of the horker- a strange ocean cow with mammoth tusks) are actually the true forms of the Nords.

I shall explain. In the beginning of time all things were formless and the Nords were those who followed Lor the Doom Drum (their Warchief) whom they name Shor in their tongue, a Riekling of such size that the ground could not hold him, such was his weight that he wrapped his feet in clouds to allow him to float. Now the Nords were made in the same image as their warchief, but they despaired at his size and looked upon him with fear and awe for his mien was too bright for their eyes and often Shor’s advisers would cover their eyes in his presence. Being formless, the Nords looked upon Shor for guidance in acquiring a form and so Shor reached into his chest and pulled out his heart. His wife Kyne gathered the clouds from his feet and poured in all the world’s ice and placed this into her throat.

At once, having swelled to a great size, Kyne inhaled the mixture and exhaled with such force that craters grew where her breath touched the land. In the largest crater Kyne spat the mixture until a giant monolith of rock and ice formed before her, and she named this creation the Snowy Throat, and on its peak she exhaled the rest of her divine vapour into the formless spirits of the Nords, roaring a cleft into reality itself. After Kyne had finished shaping them, the Nords looked upon themselves and found that they now resembled their beloved Shor and they were so jubilant that they roared a throne of ice for Kyne to sit upon, but she declined saying that her throne was nature itself. Kyne was delighted at the faith of her children and she plucked the largest of the Nords who was named Ysmiir and placed him on the ice throne with the commandment that he should be the Nords’ king while Shor would rule the world underneath.

Down the centuries, the Nords forgot their forms and began to persecute their lesser spawn whom they dubbed ‘Rieklings’ or little beasts as the Old Nordic translates. For some reason, a group of Nords broke away and made their home on the Isle of Saltsheim, becoming the Falmer or Snow Folk. When the Nords found out that their exiles were prospering, they flew into a great rage and made war upon the Falmer whom they still knew as rieklings and when they succeeded in slaughtering the Snow Folk’s Prince they drove the Prince’s subjects to the mountains and ice caves. Having bested their enemy, a few penitent Nords stayed behind to tend to the Snow Folk and these were abandoned by the Nord’s warband and took the name of ‘Skaal’ which means those who tend. These Skaal revered all nature and would see no harm come to the Snow Folk and so were also exiled by Ysmiir’s people, banished to Saltsheim for their treachery.

And so if a Nord today should see a Riekling, he offers a prayer to Shor and Kyne that they should send Ysmiir the Grey Wind of Conquest to slaughter the traitors of that isle and some Nords even hunt their cousins in the honour of their gods, placing their heads as valuable trophies in their mead halls. Some of their clevermen even used to use Riekling heads for divination, as it was believed that one could bind a Riekling’s spirit if they had the remains. The clevermen would commune with these heads to gain insight into the future, for spirits are no longer bound by time and so can see further down the path of life.

So when a Nord tells you that those Rieklings are ugly little goblins that need killing and that the Skaal are foolish snow worshippers, remember that he says this to hide his shame, for he knows he hunts his long-lost family.