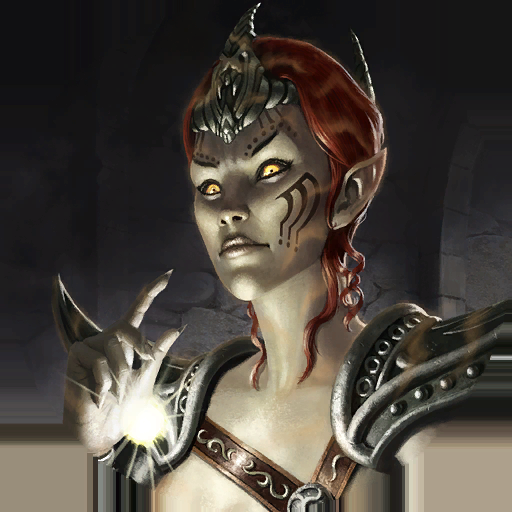 (the following are notes from a TES tabletop campaign)

As Sul approaches Drakelowe, he will feel an irresistible pull to the east, an only vaguely familiar whispering in his mind demanding that he follow it, and that he tell Cylora to give him privacy. When he does, he will soon come upon a Daedric shrine to Boethiah. As he approaches, he will hear a new, distinct voice speaking clearly in his mind: “A challenger approaches! Ah, I have not felt this presence for an age and more! You have a lot of nerve approaching my shrine.”

Before Sul has a chance to reply, Almalexia’s voice will be heard, and he will then see her standing next to him, looking up at the statue of Boethiah and speaking: “You are only embittered for your loss. Had it been any seat but your own that I had filled, you would be singing my praises across the Waters. I imagine you’ve found my current predicament quite amusing, sat atop your perch of spite and antipathy.”

B: “Tremendously so! Would that I could grab you by your pretty little throat and swallow you whole… But that will come soon enough. I will enjoy your humiliation in the meantime. Now why have you come to address me?”

A: “I did not come of my own volition, nor were the Dunmer’s legs moved by his own. His mind is having difficulty distinguishing between us, our nymics bound as they are. My own connection to him has drawn him to you; even I cannot avoid it without compromising my own security.”

B: “If only. Well then, Dunmer, think of me as the better half of your dear Mother Morrowind if that makes it easier for your simple mind. I suppose this means that you would be enthused to serve me, doesn’t it? A delightful opportunity…”

A: “Sul, we must return to the others. What of Teinaava?”

Sul will begin to experience great pain in his head, voices screaming against each other within his mind. 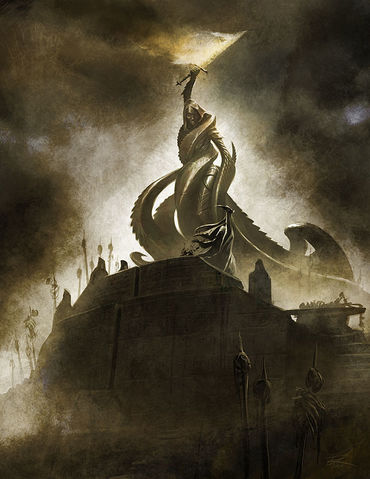 B: “Ah-ah, Ayem! You must be more careful with your little puppet, unless you want to tear his mind apart. Your influence and mine pulling him in different directions will certainly be too much for his feeble psyche to bear. Humor me! The elf may surprise both of us. Now listen, Dunmer. You will obey my command. These ‘friends’ of yours have become a weakness. They’ve made you sentimental, weak… pathetic. Return to Drakelowe and slay the wood elf. Reclaim the ring upon the corpse’s finger as your own and abandon your friend. I will send two of my warriors to even the numbers. Sever your loyalties, and we may make a warrior of you yet. Do not disappoint me.”

With this, the alluring presence of the shrine will calm and become faint. Almalexia will whisper into each of Sul’s ears.

“Don’t listen to him, you must protect your friends!”
“Do it. They’ve been conspiring against you from the beginning, you’ve seen it. They think you don’t hear them talking about you… You must kill them before they kill you! Use the jarrin poison and you cannot fail!”

With each of these voices, a flood of images will pass through Sul’s mind simultaneously. Some of them are memories from moments when Sul felt a bond with Teinaava and Cylora. Others are images of them whispering behind his back, watching him as he slept, and kneeling over him, plunging daggers into his chest and abdomen. The voices and images in his head become overwhelming, and he soon loses consciousness.

He will soon awaken to the slap of a Dunmer man in steel armor. The metal of the gauntlet made it feel more as a punch than a slap. He will say “Get up. The Prince of Plots has made his will clear. We will be leaving at once.”

The voices in his head have died down at this point, yet he feels a compulsion to carry out the task. He feels inside him two conflicting wills pushing him in different directions, one to protect his friends, and the other to betray them. Both push him towards Drakelowe.

As Sul returns to Drakelowe with the two cultists of Boethiah, the conflict between the two voices will gradually grow louder in his mind. The urge to kill his friends will be too strong to resist. When he readies himself to attack, a new voice will emerge from the chaos and attempt to ground him: Teinaava’s.

T: “Sul! I can hear what these demons have been whispering into your ears. You must not obey them! They lust for the blood of betrayal, so give them what they want… Slay the cultists!”

Upon hearing this, Arden Sul will regain a firmer grasp on his mind. His only urges now are his own.

When he has defeated Boethiah’s cultists, Arden Sul will once again feel drawn to the shrine. When he returns, Boethiah will speak again.

B: “How interesting… Despite both Almalexia’s influence and my own, you have chosen to defy my will. You have caught my attention, Dunmer… We shall see, then, if you’re truly worthy of being my Champion. Seek out the Tomb of Lyrisius. There you shall undergo your Proving, and if your Will is strong enough, you shall rise from the flame anew, wielding power you’ve never dreamed of. If it is not… you will share the fate of your beloved Tribune, consumed by my eternal fires…”

Hearing this, Almalexia will speak, “What do you mean by that?! I will suffer no such fate! You will regret taunting me when I’ve overthrown you once more, this time in your entirety!”