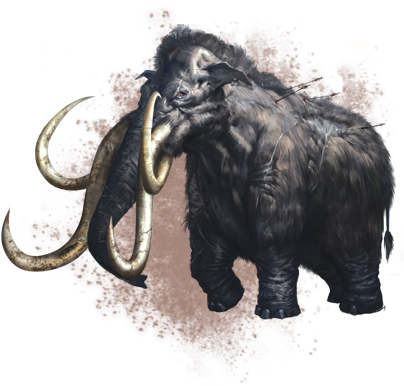 My Lord has sent another revelation: the wondrous truth of the mammoth, it’s origins and the secret power that resides within them. What you think you know of that brutish Skyrim-dwelling animal is wrong, and here is why.

In the beginning of time before the first goblins took form, there existed a group of nature spirits loyal to Kyne and they were named the Mammúthar (a name which in their secret trunk-language meant ‘Servants of the Mother’ with ‘Mammú’ being Mother and thr/thur being servant, which is cognate with the Dovahzul ‘thur’ meaning master- obviously the meaning has been extended from master to those who are ordered round by a master). Now, the Mammúthar were like all other spirits in that beginning time and had yet to take a solid shape; sometimes they would be bear-like, other times they would be undulating snakes, and still other times they would take on the form of wild horkers, but never would they settle on one stable form for long.

When the first Nords were made by Lor and Kyne into the Rieklings, the Mammúthar were there to bear witness as the Nords shifted into their goblin forms in honour of Lor who was the Biggest Goblin (not to be confused with Big Goblin which was the Dwemer’s Nyumidium). When Shor sacrificed his heart so that Kyne could mix it with her creative breath, he left his throne empty and took up the throne of the Underworld as his own. Naturally, the mortal realm needed a king to guide it and so Kyne plucked the biggest of the goblins who was called Ysmiir, and placed him on her ice throne and told him to rule as the king of all Nords. She further explained that her servants the Mammúthar would accompany the Nords in their travels and that together they would help forge the land named Admora.

Being ever-loyal to Kyne, the Mammúthar swore their service to the Nords and in so doing acquired stable shape and became a blend of bear, horker, and snake. From the bear they inherited large size and fur, from the horker they inherited large tusks, and from the snake they inherited the trunk. However, Kyne saw the anguish the Mammúthar were experiencing with having their forms frozen, and so she gifted them with the Storm Voice and shaped their trunks into mighty instruments capable of channelling the Voice. Yet, Kyne also had some measure of her husband’s cunning, and she knew that the children of Ak who took on the form of winged time-totems would pose a threat to her people, so she imbued the Mammúthar with the thu’um and charged them with protecting the Nords from the dragons’ wrath.

And, for a time, this partnership between the Mammúthar and the Nords was fruitful, until a group of Nords suddenly ceased the consumption of the Ritual Cheese of the Mammúthar, arguing that cheese was despoiled milk which was a trick sent by Sheolg, the powder-blue songbird. Those that did not partake drove the cheese-eaters into the mountains and lead a pogrom against their heresy. For the Mammúthar would nurture and guide the cheese-eaters with their dairy munificence, gifting them bones of divine fortitude and nocturnal visions which helped strengthen the mind. It is not clear why this split in thinking happened, though the Nords say it is because the cheese-deniers found it distasteful to sup of the divine. The dairy priests were the milk-drinking conduits for Kyne’s will and would interpret the deep rumblings of the Mammúthar as thank-songs.

Those who remained with the Mammúthar witnessed their ability to combat the dragons as they would turn their trunks against the time-totems and bellow a thu’um so loud it set mountains shaking. Their refusals would nullify the power of the dragons and this made their lich kings very unhappy, and so many noble Mammúthar were slain cruelly and by great cowardice with the intention of removing Kyne’s Voice from the world. The dragons would often attempt to kill the Mammúthar in acts of dominance, despising their connection to Mother Kyne and their skill in the Voice.

The Trunked Ones knowing that the dragons were a supreme threat to the Nords, urged the strongest of the Nords through cheese-visions to assault the mountain lairs of the most vile of the dragons, and to slay their lich priests for the atrocities they had committed against the Mammúthar. Thus began the War for the Mountains which raged until the Al-Du-In was banished. These Nords, now purposeless due to the dragons’ defeat, remained as sentinels on the mountains in the event of Al-Du-In’s return. These are the giants we know of, and this is why they disdain their smaller brethren, for they know them as descendants of the cheese-deniers.

Thus, when one ventures into Skyrim today, one can see the noble sentinels who eventually came down from the mountains in the form of giants to teach their kin the Elder Ways, through cheese-craft and swirl-runes, which the descendants of the Mammúthar had taught them as a secret practice. And this is why one always finds giants tending to their mammoths and cultivating their cheese.