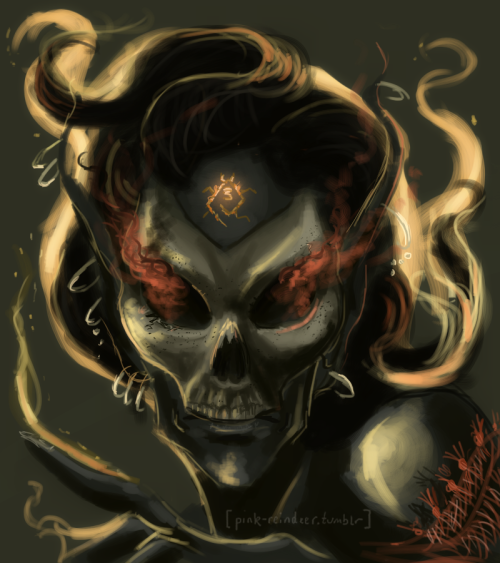 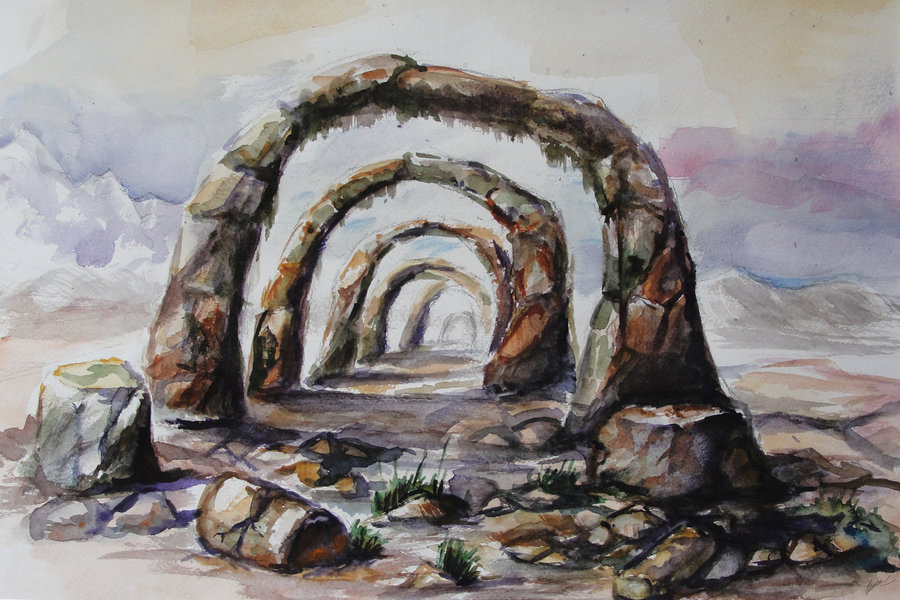 The netch-leather straps were always most difficult in the mornings. They each had to be tightened just so, the arm beneath wrapped in suede and fur to spare the harnessing rubbing it raw. This morning, the polished brass clasps were being very particular about how they caught their respective notches, the prongs sliding away repeatedly to poke at his bicep.

It was easiest to start with the chest strap. Leather held taut in his teeth, the familiar faint acid of netch-leather tingling against his tongue, his clumsier left hand fumbled the buckle into place. One down, at least. He heaved a sigh; this would be so much easier with an assistant. Curse his damnable pride.

(Curse, too, this inconstant left hand, inclined to the most enraging tremors these past few years. He could hardly ignore that the medicines were not lasting so long as they once did.)

He turned the matter over as he started on the other straps, working down his arm one by torturous one. Had it been a good idea to send Lo’Droj to market so quickly? Really rather sweet, that one, always willing to help. And the dogs even liked him, certainly a first. Perhaps something might come of it, something a touch further than the occasional warm bed and some help with the housework, if he’d just ask Lo’Droj to stay a little longer in the mornings. Would that be so bad?

He gnawed one strap a little as he considered the matter, the leather’s tamed venom numbing the tip of his tongue. Lo’Droj was a lovely young thing, and Moraelyn really did like him. Perhaps it was that self-same affection that made him keep Lo’Droj somewhat at arms’ length; Moraelyn felt too much of a bitter old foreigner in private, too inclined to brooding and quiet rages at unpredictable moments. It seemed a shame to inflict his darker, more honest self on such a sweet boy. (So far, he had managed to avoid the issue entirely, explaining away his odd habits and eternally-present gloves as some mysterious, ancient Dunmeri eccentricity, some inexplicable custom from the old country. Lo’Droj, fewer than thirty summers’ old and utterly devoid of worldly travel beyond this half of Elsweyr, innocently accepted every one of his blatant lies; yet another reason he was growing rather fond of him.)

However, he admitted to himself as he wrestled with the last strap, if he wanted Lo’Droj to help him with these blasted things every morning, it stood to reason that he would first have to explain them. To remove his long gloves and show the boy how the leather twined about his arm and torso felt like an insurmountably difficult task. If he were honest with himself, Moraelyn supposed he was making a terror of his own vanity, but in truth that was only part of it.

The tail of the last strap slid more-or-less meekly into its buckle. Stroking his fingers over the gleaming obsidian, tracing along the gilded letters engraved into the bones, he gave a thin smile. He hadn’t entirely deceived dear, naïve Lo’Droj, not this time. This was, in a very real sense, an object sacred to his Dunmeri sensibilities. He could hardly allow anyone else to touch something so precious as this.

The hand was, truly, a work of art. Painstakingly crafted by talented artisan-mages, it had been paid for with the blood of several dead men and the calling-in of various favours (those little connections he’d once made by the Sea of Ghosts had proven rather profitable in his old age). In a certain angle and a certain light, the ebony reflected like a black mirror, the kind witches were usually fond of. There was something insectile about the glassy, void-dark obsidian, how it shielded the precious bone with muscle-inspired shapes like a carapace, fitting for Redoran ebony. The bone itself was polished and inlaid with golden Daedric, down each finger and down each bone at the back of the hand, the letters turned to be readable to Moraelyn always. The bones weren’t carved to shape; these bones had known the shape of hands before.

“Good morning, Drerrin,” he murmured. He traced over the gleaming words along what were once his eldest brother’s fingers, lingering over each Daedric letter with aching tenderness:

WE GIVE
OURSELVES
TO MAKE
YOU WHOLE

The lettering faintly glowed for a moment. He continued down, lovingly stroking the long bones of his second brother’s metacarpals. “Wake up, Ralias.”

WE SWEAR
OUR LOVE
YOUR LIFE
OUR BLOOD

The letters brightened, Redoran ebony and Indoril bone heating from within. The old ache of his missing forearm blossomed into a brief but searing pain, a beat of agony extending from his ruined limb as though the arm were not only whole, but in flames; his jaw tightened until the muscles shivered, fierce in his silence. Shuddering of its own accord, the arm’s volcanic glass chimed and rattled against the dressing table, fingers curling in clawed spasm. Golden light spilled from the engravings like mist, wreathing the arm in dawn-glow. In a breath of petrichoric chill, so foreign for the dry heat of Elsweyr, the shapes of two mer suggested themselves from shadow and glow, gathering substance from dust and cobweb until they seemed almost whole.

Moraelyn sighed a nervous breath he always held, washed anew in the daily sense of homecoming, a relieved warmth within the chest. To him, his brothers appeared just as they had when he was a child; youthful and hale, smiling faintly in welcome. He wondered what spectral horrors an unrelated onlooker like Lo’Droj would see; what ragged flesh and howling jaws would chill them, what yawning, accusing eye sockets would stare back?

Ralias’ kiss at his cheek tingled with static as always, raising the hair along his spine. “Another day, brother-sister?”

“Another day.” Moraelyn ran living, ever-trembling fingers over ghostly forearms in greeting, feather-light, barely stirring the air. The numbness that soaked into his fingertips felt warm and welcome, the confirmation his eyes hungered for. “How is Mother?”

“Well, quite well. She stalks Attribution’s Share for the season. Exploring the mazes, I believe.”

Ghostly and gleaming ebony hands each rose in matching, languid motions of nereid grace, a flowing dance to test movement and response. With his brothers mirroring his every gesture, the substitute hand moved as though it were Moraelyn’s own living flesh. He tested each joint, the ebony and the gold-bound bone sliding over each other as smoothly and silently as bleeding. “Safe, I hope?”

“Safe and joyous,” Drerrin smirked. “Visiting her warriors. She’s found so many of her old friends there. Boethiah must have known her by name, I think.”

Moraelyn nodded knowingly, delicate lines deepening at the tails of his eyes, contented apostrophes quoting his smile. “And Father? He’s been quiet of late.”

“Boethiah’s realm suits him ill. He rests in the great city,” Ralias murmured, speaking of Necrom, that great metropolis of Dunmeri dead. “I believe he is still reading, actually. He’s found a lovely library, by the prayer-halls on Derata and Vrenmisu.”

Moraelyn always relished these tiny details, the streetnames meaningless but for the knowledge that his father was happy there. “Genealogy?”

“Novels,” Drerrin chuckled. “Romance and adventure. Says he’s had enough of his own, now he has time to hear someone else’s.”

With arms of grey skin and shining artistry, he held out his hands for his brother’s shades to hold and dwell within. It was no sacrifice at all, to yield up a little sensation and body heat for a time. “Will you take my love to them?”

Drerrin’s lopsided smile was soft, his forehead touching Moraelyn’s left temple, Ralias’ touching his right. “They know,” he said. “But we will.”

“Thank you,” Moraelyn whispered; there were so many things to give thanks for that he could not possibly explain them all, though he had tried over many mornings. His brothers kissed his temples, let him move the writing hand they had helped return to him.

The arm moved easily now, borrowed and shared sensation letting Moraelyn feel traces of air currents, the muted texture of the table’s wood through hard fingertips. The ghost of a sense of touch, as if touching everything with the back of his fingernails. Every movement precise and unmarred, not a shiver to impede his will; only now could he feel complete.

The hand remained a conduit between Moraelyn and his brothers, a bound intimacy he clung to gladly. They would share the hand’s every touch and shift for a time, until the soft light faded from the golden letters at least; he dedicated his mornings to their whims, a changeable ritual of tasks as likely to involve prayer as it was to involve frying eggs. It seemed more than fair, in exchange for such a gift. “What shall we do today?” Moraelyn asked, love held beneath the tongue as it always was, the daily offering of experience for their mortal nostalgia.

“I want to light the candles,” Ralias admitted after a long, thoughtful silence, dutiful and pious as ever. “I miss the routine.” Moraelyn nodded, kissing the mist of his cheek.

Drerrin’s closed-lipped grin flourished bright and wide, eyes sparkling with excitement. “Pet the dogs. All of them. I want to touch every single dog you have.” 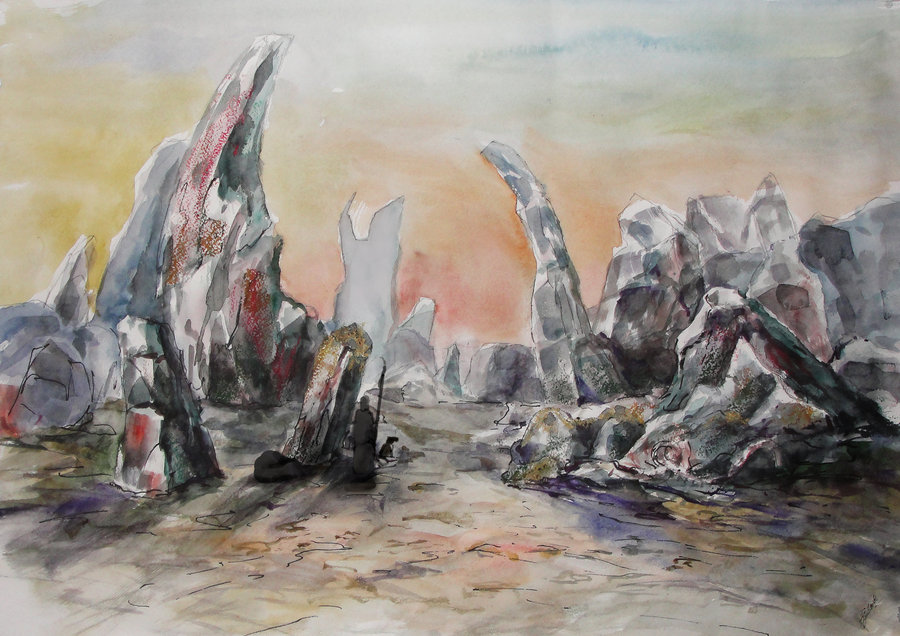 Moraelyn laughed, a tired shadow of his childhood giggle but no less delighted. “All right.”

He closed his eyes when he felt the air pressure drop and fill. Faint scents lingered for a moment, the scents of his brothers; golden kanet flowers and sandalwood, ozone and ash and bad shein. An errant draught, and the dry desert air filled his lungs again.

“All right,” he murmured again to an empty room.

He took up the tibrol-wood cane by his bed, tucked the long gloves into his waistsash. He would have perhaps an hour before Lo’Droj returned from the market. He would have to hurry.

He could hardly allow anyone else to touch something so precious as this.