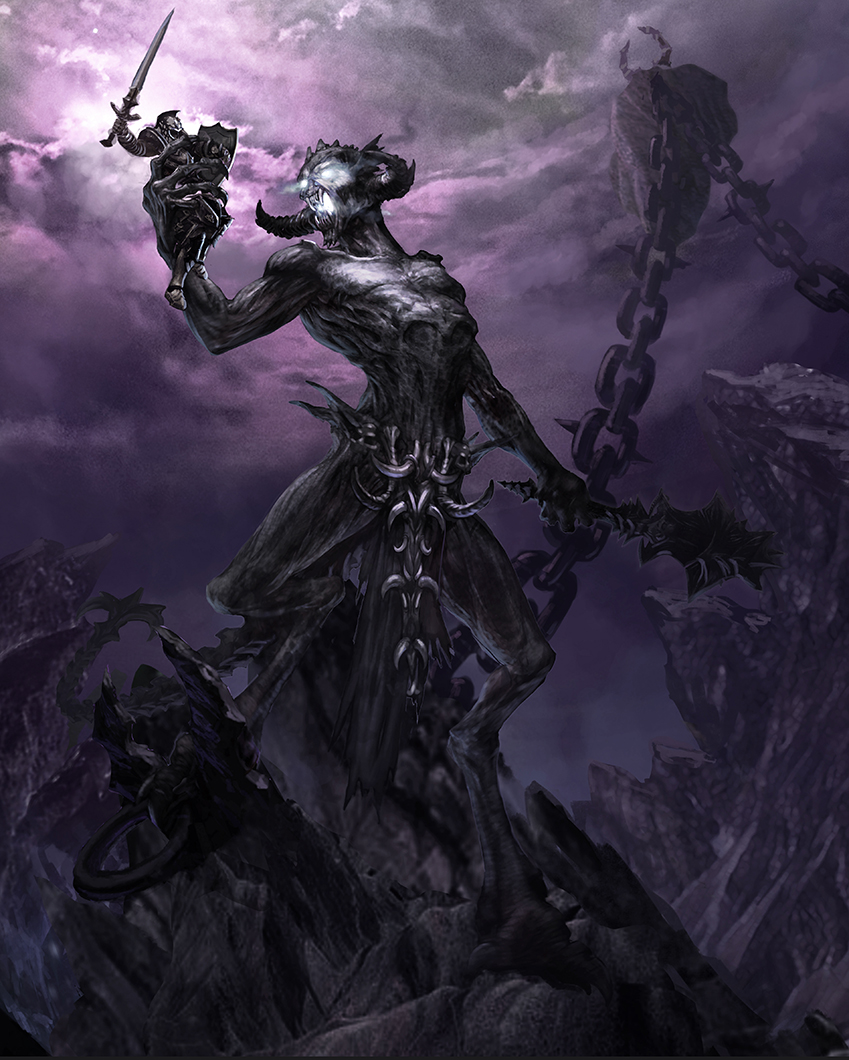 Molag Bal held no pity for the mortals slain by his champion. Mountains of corpses littered from city to city, each body as violated and maimed as the one before it. Towns once humble and peaceful were reduced to bitter memories and smoldering ruins on his Summoning Day: the 20th of Evening Star.

“Excellent.” The King of Rape sneered as he inhaled the fumes of misery and desolation. “There is no greater purpose to be had from mortals.”

“I couldn’t agree more!” Sheogorath cried from behind him, twirling his cane and resting upon it with his grin. His outfit was flamboyant, with wild vivid colors that screamed against the bleak remnants of the village and its slaughtered denizens.

The Madgod had hung his head, never taking his stare off the Lord of Brutality. “Mortals are fun, such fun! I can never get tired of them! Unless I get bored and kill them.”

“Leave me, Madgod, and return to your pitiful realm.” Molag Bal snarled, sparing only a second to cast a loathing gaze on the eccentric Prince. “You and I have nothing to discuss.”

“Oh, but we do!” Sheogorath insisted, circling around his fellow Prince. “Your champion is the concern of mine. You thought he was of your own will, but he is in fact mine! I’m afraid you’ve been barking up the wrong Tower!”

Molag looked upon him with scorn. “What nonsense are you prattling on about? Every damned soul is mine for the taking and mine alone. The Champion and all of his victims will spend eternity in pain and suffering at my Coldharbour.”

Sheogorath’s grin widened – his gaze almost feline-like. “Victims, perhaps, yes. Hardly anything I can do now that they’re dead. But the Champion? No, no, he’s my doing, and a damned good one, I might add!”

“You speak of impossibilities.” Molag spat. “This mortal has bent to me, and forever shall he be mine.”

“A bet over the champion, then?” Sheogorath chirped, and outstretched his hand. “So be it! We shall meet again in three years time! May the best Daedric Prince win!”

Molag Bal did not shake the hand of the Madgod and instead looked upon him with pure contempt. The Prince of Madness simply faded away until nothing but eyes and a smile were seen, and they too faded into obscurity.

He did not trust Sheogorath, but he was no fool to underestimate the Ruler of the Shivering Isles. Instead, he returned to his realm to forge a mace and poured his malice and contempt into it. It was not his signatory Mace passed down to Champions, but a new one specifically designed to spite Sheogorath.

The Champion stood alone on a snow covered hill, his body freshly decorated with blood. The blade gleamed wickedly in the moonlight, singing promises of ill intent for all who met its edge. His eyes were weary, but face was lit with determination to serve his master.

The Prince of Domination knelt to whisper in the ear of his Champion. “Take this Mace of Damnation.” He hissed with hatred at the mere thought of Sheogorath. “Kill all that you see. Raze every home and farm you walk into. Terrorize every man, woman, and child and inflict the scars of my wrath. Flood the lands with their blood and paint this world a picture of woe. For three years, inflict my will upon this pathetic land.”

“My lord.” The Champion whispered, kneeling in gratitude. His eyes nearly welled up in tears. “Their souls and misery are as good as yours.”

“See to it that they are!” Molag Bal roared, vanishing back to his realm.

And for nearly three years, the Champion sought to inflict pain and sorrow onto every living soul. He fought through the screaming pleas and begging of those he murdered as he caved in their skulls with the Mace of Damnation. At night, he would ignore their cries of agony and worship his lord.

But a worm of doubt wriggled in the back of his mind. He was uncertain that he was being vicious enough to please his master after being given such a beautiful weapon. With each of the passing thought, he grew fiercer and more determined to outshine himself. Every breath became more rugged and heavy with the burdens of domination.

Through his sluggish, fierce yet frantic efforts, one survivor remained alive. She was broken, bruised, maimed, and violated, yet alive. It was she who fled to the Legion when she found herself the strength to move again.

Upon the end of the second year, he was captured by the Legion and held for trial for his crimes against the Empire. Rather than being put to death, the Champion was sentenced to imprisonment indefinitely. As such, he was sent to the Imperial Dungeons and to remain there until his dying day.

The Champion paced night and day in his cell, demanding the guards kill him in fair combat. The guards refused to heed his wishes and left the Champion’s shouts to echo to deaf ears. Even many of the prisoners refused to end the Champion’s life, for fear of meeting the same grisly fate as the many victims slaughtered by him.

As the third year passed, the Champion’s confidence wavered, and fear of failure spread in his heart. Surely he had fallen from Molag’s grace. What sort of Champion could he be for not spreading anguish and misery during the time he had been asked? He dared not pray, for how could he crave pardon from the relentless Lord of Brutality?

At the end of the third year, the beams of the morning dawn fell upon the lifeless corpse of the former Champion. He had hung himself by the neck the night before, from a noose fashioned by the sheets of the mattress.

Molag watched with murder in his gaze as the soul of the Champion departed out of the world and into Oblivion from his realm. “What sort of game are you playing at?” The King of Rape snarled.

Sheogorath cackled triumphantly, gleefully watching the corpse sway from side to side. “You see, he was mine all along! I really have you to thank, Molag! His desperation led to his unmaking, and he proved himself to be a worthy addition to the Shivering Isles! The desire to control, to dominate, it’s a very maddening experience, is it not?”

Molag Bal took his mace and withdrew from the mundane realm. He would have to contend with unleashing his fury on others.