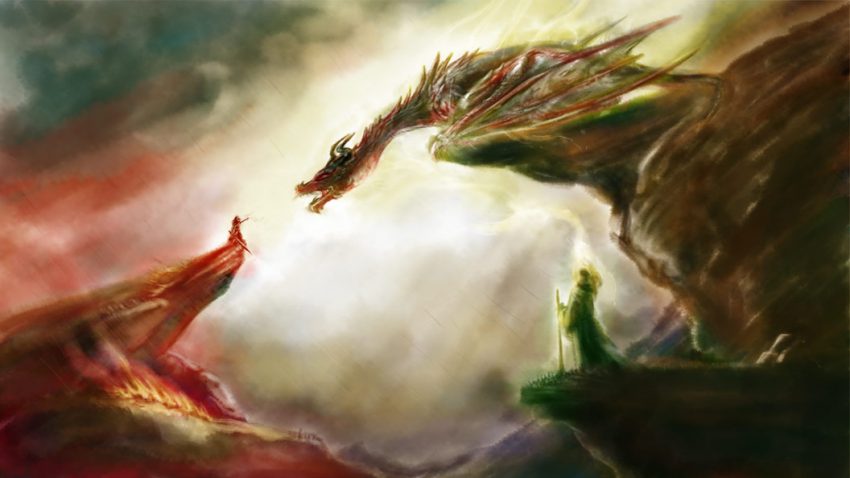 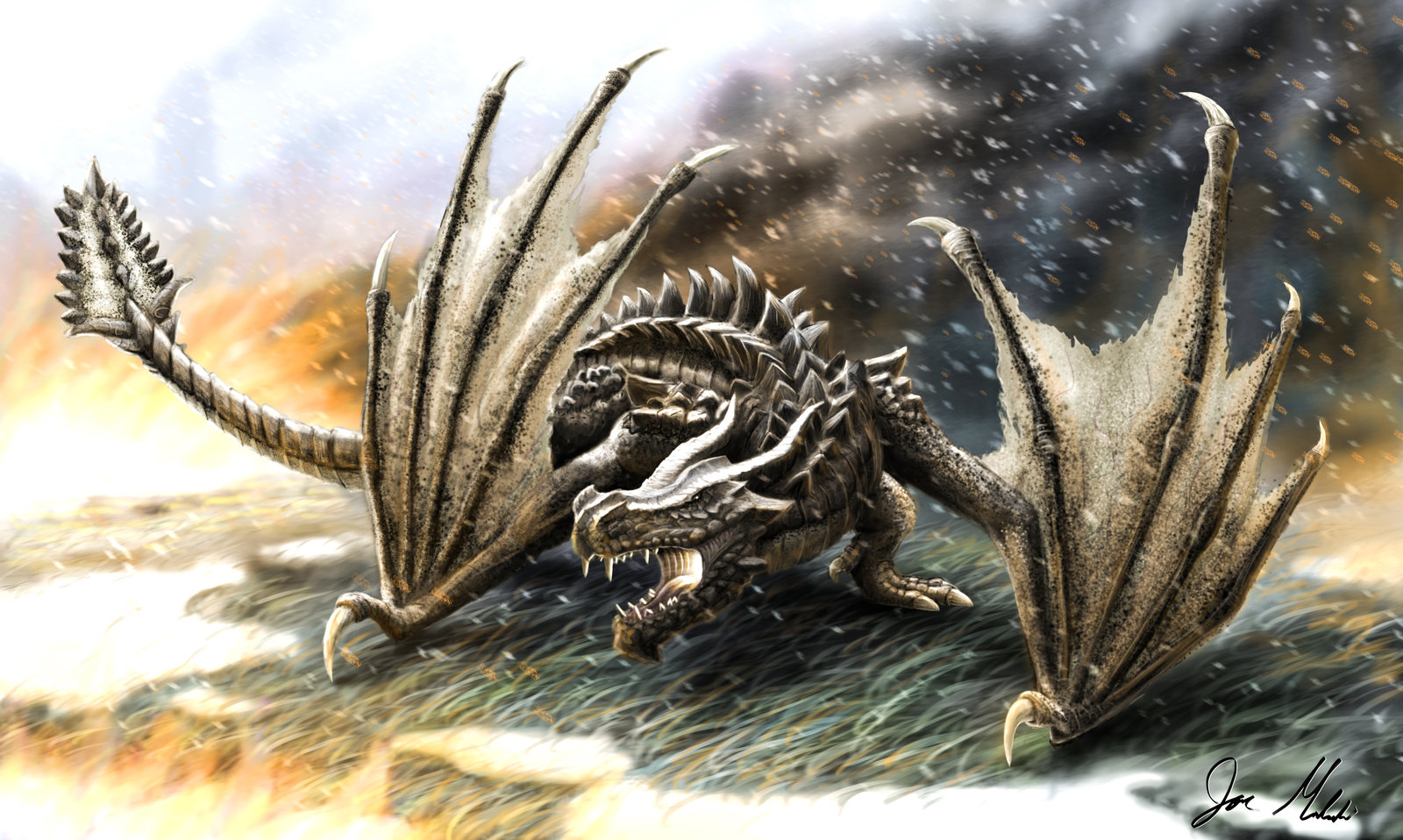 Gather round, innocent children, and I shall tell you of the origins of the Dragons. Not many people know that the Dragons are actually all big, scaled cats which descend from minor spirits. These cat spirits were formless until Lady Ra’azu plucked a beam of moonlight from the sky and condensed it into the first sugar. This she placed inside her breasts (teats) and from which the cat spirits did suckle. Yet the Lady Ra’azu could not provide all the nourishment the first cats needed, so she dipped her clawed hands into the world river and speared the strongest, most scaly fish and placed it before her children. With the fish before her, she crooned to its corpse until the scales fell from its body. Scales formed into a mountainous pile before her, Lady Ra’azu roared a great gust at them until there was a whirlwind of scales, and in this whirlwind she placed the cat spirits. The scales bit and tore at the pelts of the cats, causing deep gouges of blood, but Lady Ra’azu was clever, and she used the blood as an adhesive, and stuck the scales onto the cats’ bodies. Newly scaled, the cat spirits emerged stronger and mightier, able to deflect the remnants of the scaled whirlwind, and with hides now tougher than forged metal.

But the cats were still not content, and they squabbled over who had the shiniest scales until one of their number named Koshala roared some sense into their heads and they all fell before her as the Queen of Cats. She ordered the cats to form tribes and to work together in harmony, and for a time they did, until Lorkhaj the Black convinced a few cats that Koshala was a tyrant and needed to be overthrown. Enraged, Lady Ra’azu gathered Koshala’s faithful and roared new power into them. She went to her friend the mighty eagle El-Aur and convinced him to give up his wings and sharp talons that the Lady Ra’azu’s cats might become stronger. El-Aur was reluctant and squawked his disapproval, but the fair Lady told him that if he were to do so, then he too would share in this gift which she was preparing, and would soon become king over all he surveyed. His greed appealed to, El-Aur accepted the proposal and tore off his wings and placed them before the fair Lady. The Lady thanked the great eagle and left his mountain with the wings he had provided.

When the Lady returned to her people she sung to the wings a song of binding and they split into a myriad of reflections until thousands upon thousands of wings existed where there had been just one. Then, Lady Ra’azu grabbed the reflections and breathed them into Koshala and her people, granting them the mighty wings of eagles. Newly empowered, the hosts of Koshala assailed the traitors of Lorkhaj and threw them from high cliffs until only Lorkhaj himself remained. But Lorkhaj was a sly creature, and so he spat out a heart-shaped hairball of such size and stickiness, that it trapped Koshala’s army long enough for the bent cat to escape. Fleeing into the shadows, Lorkhaj swore that he would return with a mighty army to avenge this injustice.

Weary from the fighting, Koshala and her people set themselves down in a vast jungle where they made the first tribes and where Lady Ra’azu taught them how to turn the moons into food so that it would sustain them against their biting hunger. But in those days of peace, giants with thousands of eyes, arms and faces would pick off the weakest cats and eat them because the cats were weighed down by their scales and their wings which prevented their escape. So the fair Lady went to Deer King Ekinir and asked him for his legs, those limbs which make fools of predators and which keep the deer alive in trying times, but the Deer King refused, saying that the legs of his people were sacred and of pure essence. Knowing how the Deer King had always sought to have her, Lady Ra’azu approached him with an offer: She would lie with him in the midst of twilight for 8 nights, teaching him the secrets of pleasure and the moons and bearing his children at such time as she might conceive, and in return, he would give his legs to her freely and when the time came, he would become the hunter of Deer instead of the King of Prey. His lust and limbs quickened by her offer, the Deer King relented and the two spent 8 nights of passion together until on the eighth night his legs fell off from the pleasure. Having secured the Deer King’s legs, Lady Ra’azu left the domain of the Deer King swollen from his discharge, and she rested in a shady grove and birthed a multitude of horned creatures, some which resembled horses, others which looked more akin to bulls.

Once again before her people, she whispered to the legs and they became the reflections of a multitude, and her people stepped into these images until they fused to their forms. The cats now stood taller, with talons at their feet, strong legs, mighty scaled wings, and a raiment of jewelled scale, the cats were becoming more like the children she had imagined. But they were still missing something, for their voices were still weak and they meowed softly when they should have roared. Saddened by their fragility, the Lady Ra’azu went before the Hawk Lady Kyna and asked for her screech that she might empower the voices of her children. Now the Lady Kyna had long been a widow after her husband had been executed, and she had grown unused to union with another, and having heard of Ra’azu’s deal with the Deer King she was impressed at the determination of the lady before her. So she, wanting to test the fortitude of Ra’azu, bade the Twilight Lady to lie with her as her husband once had, that she might be reminded for a time of his embrace. The Lady Ra’azu had never known chastity and so she agreed to lie with Kyna for 10 days and 6 nights as Kyna’s husband had once done, and in return Kyna would gift her the voice of her throat. Her duty fulfilled, the fair Lady Ra’azu left with a storm in her stomach, promising that in the new age to come that Kyna’s husband would be restored. 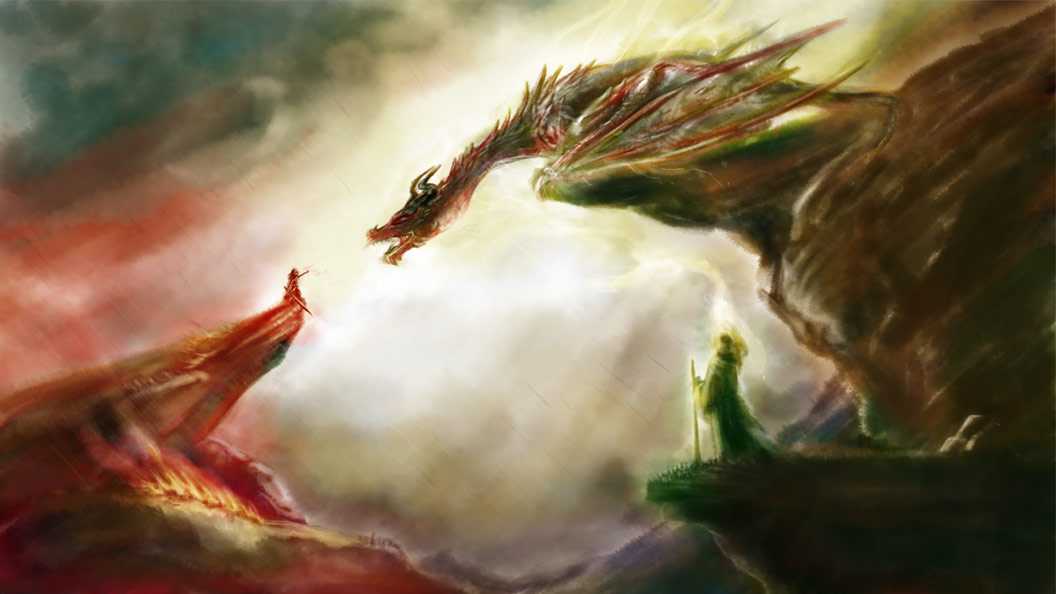 The Lady returned to the people of Koshala and breathed the storm into their lungs until all the cats could roar clefts into mountains, and with their new winged and scaled forms, they bellowed fires and ice storms into the ranks of Lorkhaj’s army of bent cats, and all who arrayed claws against them met their doom. Lady Ra’azu, pleased at their power, named the cats Drak-Gons, meaning those who display strength, and she blessed them with knowledge of Kyna’s language. Koshala, the most powerful of the Drak-gons, used Kyna’s knowledge to rip Lorkhaj from his hiding place and imprisoned him inside a shadow of the moons above, preventing the dark cat from ever returning to the ranks of the Drak-Gons. Pleased with the outcome of her plan, Ra’azu visited El-Aur and gave him the crown that was promised, to Deer King Ekinir she gave the locations of the children she had birthed, and to Kyna she returned her husband who was now know as Ra’Taal. Having completed her plan for making her children, Ra’azu sung to the ground until a forest of roses appeared and she dwelt amongst them, leaving her children in the capable claws of Koshala, the first Dragon.

This is the truth about Dragons, and some say that you can still hear the Deer King prowling the forests searching for his Lady, the proud king El-Aur ordering round his subjects, and the joyous singing of Kyna as she lies with her husband Ra’Taal once more.