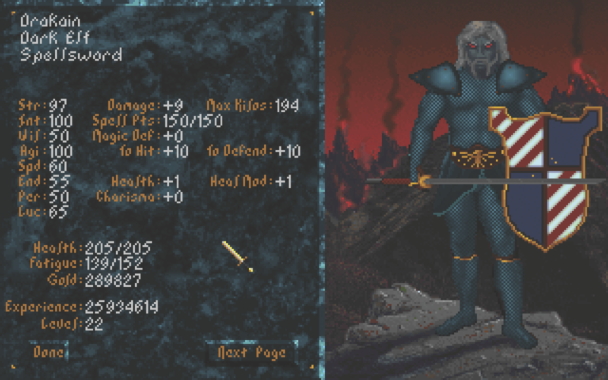 I started playing D&D over 30 years ago. Yes, I’m old. The thing that attracted me to D&D was that it was fun. Who doesn’t love the idea of running around a medieval (magical!) world fighting dragons, wooing maidens (or young men, this one does not judge), and drinking the locals under the table, only to steal their loot? Good times!

In our group we found the best fun came from freedom: virtually every session was improvised. We had modules for background info but for all intents and purposes we made it up as we went. And it was awesome. Being creative, imaginative, and more than a little random led to epic adventures. I’m sure that some people would have thought our “world” was a little weird: there was a local baron who looked suspiciously like Dr. Doom, a grizzled gunslinger seeking his Dark Tower, and a cult of rat worshippers beneath an abandoned mansion. But we had a LOT of fun, and that was the point, wasn’t it? The Elder Scrolls was born from an old D&D campaign and it doesn’t take long to realize the point is having fun.

Who wouldn’t want to be a cat-person or dark elf edgelord? Every game is improvised; yes there are quests to follow but why not use your levitation spell to hurl fruit at people in Solitude? Why not put buckets on the head of every guard in Whiterun (I have)? Why not turn. Every. Single. Dragon. Into Thomas the Tank Engine? Yes, there will be people who think your “world” is weird (is that Piko Taro at the Bannered Mare?!), but being creative, imaginative, and more than a little random can lead to epic adventures. And it will be awesome.

Which brings us to subjective lore. Some of us don’t play TES just for the story – or to put buckets on people’s heads – but for the lore. TES lore is deep, interesting, and more than a little confusing; discussing it with friends online is it’s own epic adventure. Over the years Bethesda and their affiliates have made in-game nods to fans and fan-theories (no small number of them through our favorite Khajiit!), but it wasn’t until Daggerfall that all of them became canon. Yes, I used the “c” word. The ending of Daggerfall included several different endings and when confronted with which of them was the official “canon” ending, Bethesda chose all of them. “The Warp in the West” is an in-game book that says, in more technical language, that there were shenanigans.

Did Mannimarco become a god? Yes. Did Numidium stomp the world into rubble? Yes. Did all of those endings really happen…at the same time? Yes. Because the point of the Elder Scrolls is to have fun, and my fun should not ruin yours. Your playthrough of the game is just as valid as mine – that’s what is meant by subjective lore. Bethesda honors all of our playthroughs, offering no final commentary, so our fun can truly be ours. Will our “worlds” disagree? Sure. But they will be awesome.

Now, I realize this is a tough pill for some lorebeards, and I’ve spent a lot of time in different groups showing how TES is a multiverse Dream, and how that allows for Thomas and Piko Taro to exist simultaneously with Alduin or Vivec (don’t forget Peke Uutchoo!). But maybe the best way to think of it is this: your opinion matters. When asked about whether there was canon or “objective” lore, Zenimax Online Studio’s Loremaster, Lawrence Schick, said this: “[Tamriel] is a world of myth.

This is a world where reality is actually changeable, where the Divines can change not only what happens going forward, but what has happened in the past…the idea there is an objective reality behind all these different people’s opinions is not necessarily the case in the world of Tamriel. So listen to what all these different people have to say, make up your own mind, make up your own beliefs about what happened and you’re as liable – since you’re playing in their world and you’re playing a character in their world – what you think happened is as legitimate as what that NPC thinks.” This, all of this, is about having the freedom to “go where you want to go, do what you want to do, and be who you want to be.”

The world is designed to give you that freedom, even down to its metaphysics. You are free to disagree with the characters in the game. You are free to see things your own way. Yes, there is a kind of baseline lore that sets up the universe of Elder Scrolls – but you decide what to do with that universe, and that includes accepting and rejecting any part of it. Subjective lore creates a subjective world where everyone can have fun, whatever their definition of fun is. Or, to put it a simpler way: “When the next Elder Scroll is written, you shall be its scribe.” And I have no doubt: it will be awesome. •