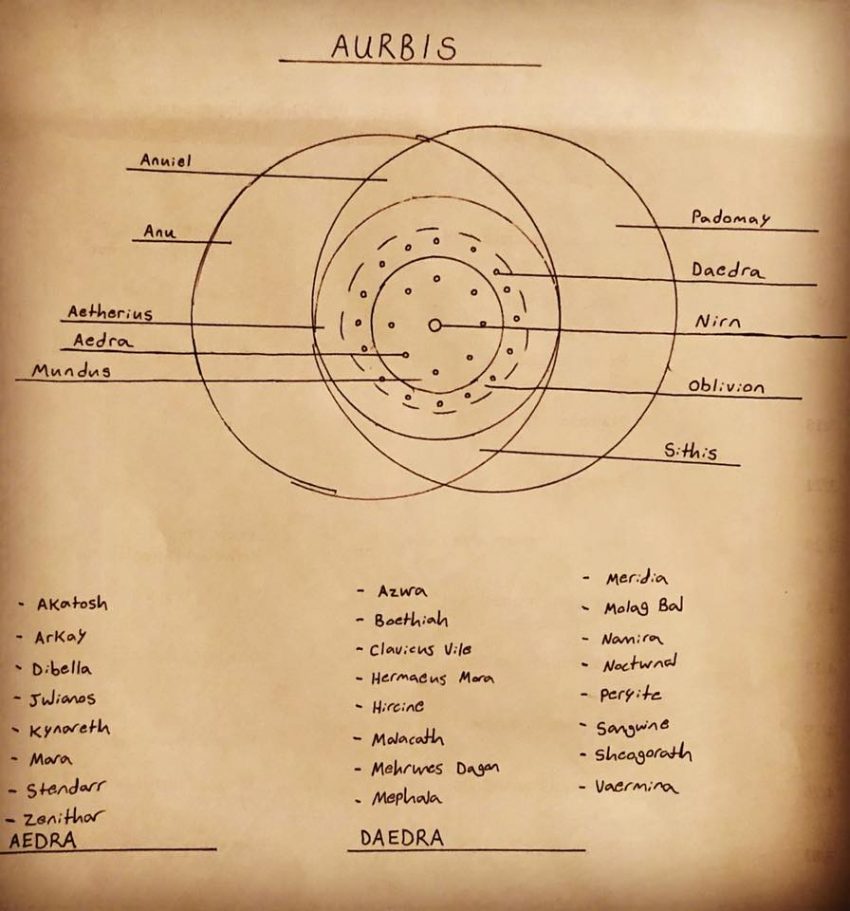 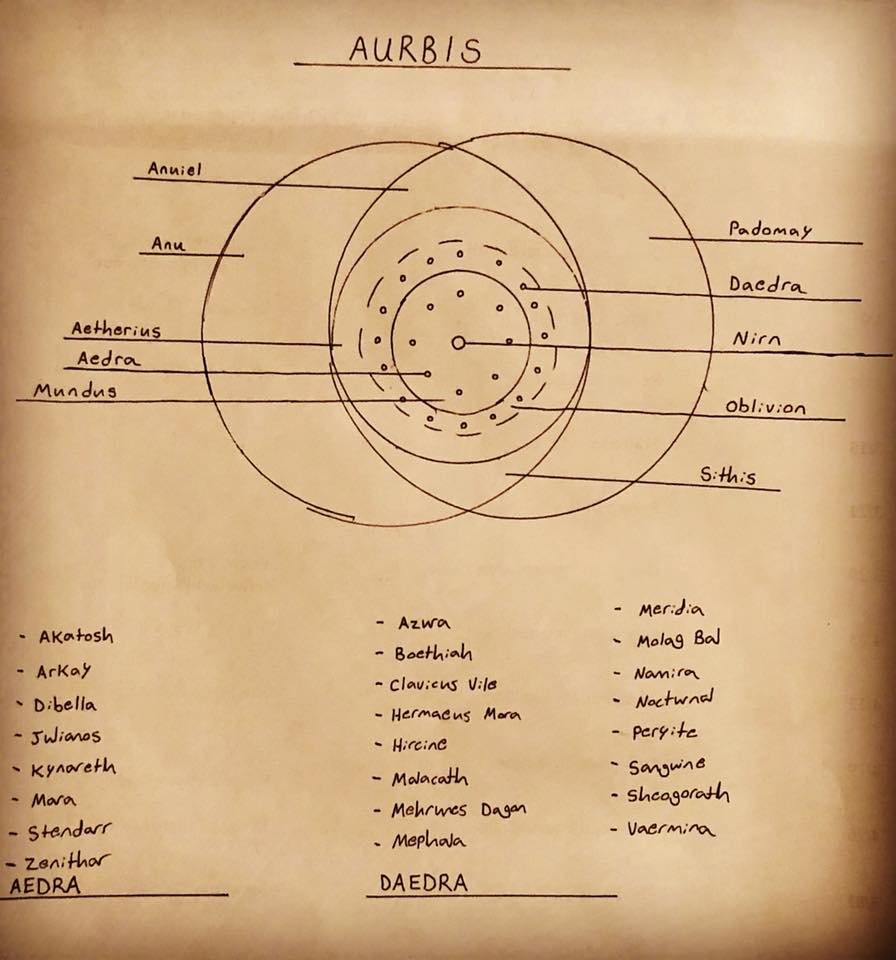 Simply put, the Original Spirits (or “et’Ada”) who arose from the frictional intercourse between Anu and Padomay, the twin cosmic polarities of Order-Chaos and Stasis-Change, can be divided between those who participated in the creation of Mundus and those who refused. In little understood processes of self-reflection, Anu and Padomay birthed their own souls: Anuiel and Sithis, who in turn birthed their own souls: Auriel (Akatosh) and Lorkhan. These souls’ souls became the harbingers of Time and Mortality. Lorkhan concocted the idea of the creation of a realm of mortality governed by time (Mundus); Akatosh’s time helped the Original Spirits to know themselves, and those spirits’ natures tended to align with either Anu or Padomay. The interplay of Anuic Akatosh and Padomaic Lorkhan resulted in the existence of Nirn.

Those Original Spirits whom mortals call “Aedra” are Anuic in nature, and sacrificed portions of their innate power to give form and stability to the mortal plane. Many reneged when they realized their sacrifices would result in their permanent diminishments, and fled the mortal plane back to immortal Aetherius by tearing holes in the veil between the worlds; these are known as the Magna Ge (named for Magnus, their chief), and their tears are perceived by mortals as the sun and stars. Some chose not to abandon Mundus and worked to form and populate it, and are the Ehlnofey; these either transformed themselves into the laws of nature or, having lost their immortality, turned to repopulation to become the primordial progenitors of the current mortal races. The eight mightiest of the Aedra became the attendant plane(t)s surrounding Nirn, granting mortals their stabilizing protection and indirect governance; these are commonly called the “Divines:” Akatosh, Arkay, Dibella, Julianos, Kynareth, Mara, Stendarr, and Zenithar.

Those whom mortals call “Daedra” are Padomaic in nature, and refused to participate in the creation of Mundus. They rather preferred to retain their inherent powers and instead form and fill realms within themselves, under their complete control. The Daedra inhabit Oblivion, the void of space between Mundus and Aetherius, are incapable of original creation, but are masters of change. Though they contributed nothing to the existence of Mundus, they delight in spiting the Aedra, their ancient rivals, by enacting changes in the fabric of mortality and interfering for their own ends in the lives of mortals. The sixteen mightiest of these are collectively referred to as “Daedric Princes:” Azura, Boethiah, Clavicus Vile, Hermaeus Mora, Hircine, Malacath, Mehrunes Dagon, Mephala, Meridia, Molag Bal, Namira, Nocturnal, Peryite, Sanguine, Sheogorath, and Vaermina.