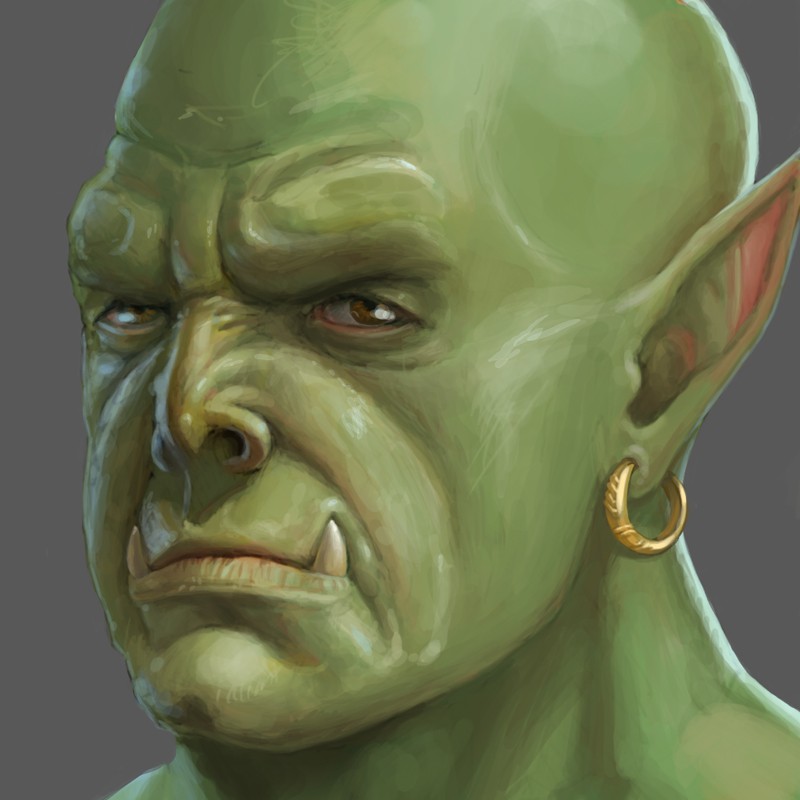 …I take a deep breath. The acrid smoke rises to the very ceiling of the main hall of our House, filling my lungs as shamans throw the smoking blends into the fire. It takes me an effort not to start coughing out the smoke. We have no other way to fall into a trance yet. Then there is a drumbeat. This primal, barbaric ‘boom bang bang boom’ adapts to the beat of my heart only to deceive me and change it. We have no other music yet.
My eyes are tightly closed as I wrap my right hand around the hilt of my father’s greenish-blade scimitar. My left hand holds a strange obsidian statuette brought by Wanderer. Some mysterious force pulses in it as if a stitched up heart tries to thump through the drumbeat. Now as my unity with the smoke and the drumbeat is attained I see with my eyes shut that I am not the only one to accept the figurine from Wanderer. But this knowledge can not wipe the smirk off my face. My companions in misfortune are not able to stop me from achieving the main goal.
From my heel to my toe, then from my toe to my heel. Something is changing, vaguely and elusively. And so it begins. I barely open my slanting eyes with vertical pupils. They are full of tears for smoke gets into them. They have seen nothing save for lies, betrayals, contempt, and slavery shackles. Should I throw it all away? “You must,” my father’s voice tells me. Any metal must be cleaned of impurities. And I start remelting.
The walls of the old castle which has become our House fall apart into smoke and debris and I see myself high above the Gulf, above height of the bird’s flight. I’m standing on the head of a giant. The bronze-shining giant. The Brass Tower. There is a fontanel under my feet, covered only with a thin sheet of metal. This is the door to the sanctum sanctorum. But since my hands are busy, it can not be opened. The shell of Numidium begins to heat up. You must shift from one foot to the other in order not to burn them. The brass god stops. He listens to. And thus my strange dance begins. I am clumsy and incompetent and the Brass Tower starts its movement again, back and forward at the same time.
The Dragon Who Bites Its Tail is growling as this sacrilege continues. Or is it the Serpent? No, the Serpent is right here, trying to stop my dance with an acid smoke that wraps around my legs. The sweep of my scimitar cuts the smoke into pieces and the demon recoils, hissing. It does not want to disappear, though. Instead, it becomes a tall figure clad in a grey mantle, the hood covered the half of the face.
“What are you doing?” the demon spits.
“I’m dancing,” I answer, grinning, knowing, that my grin is no better for the creature than the gauntlet thrown down.
My legs continue to beat the rhythm of the Heart-Totem like a blacksmith’s hammer striking hot metal. I dance further and my legs find their way to the royal court of the Two Kings, each of Them is true and each of Them is an enemy to one another.
The Serpent writhes, powerless and furious.
“You break the oath given by your nine-times-nine-great-grandfather. I might take the power given to him back and you will again become a worm that will be crushed by Both Houses! It is your destiny which I saved you from, you miserable shit-eaters! I heard your prayers and showed you some pity. And this is how you pay me back!”
But my dance goes too far forward and back, so the Serpent’s words do not confuse me.
“Although you fooled me once, it won’t happen again. Your promises and threats don’t mean very much. You said that you’d make us strong and survivable in exchange for us being your servants for nine-times-ninety-nine generations. But in fact you only made us prisoners of our own weakness as the World Eater always nullifies the generations’ score. And don’t you dare trick me with your slough. Old man Ted, the deposed king of Malbioge, assured me that he’d stolen your new, yet-to-grow-up hide. You are no more Orkey.”
The demon seethes with anger and his rage tears up his translucent dead hide from within. Now the creature who has doubled in size reminds me of myself as if it is my distorted reflection, with a crooked nose, slanting eyes, heavy eyebrows with bone spines, and fangs sticking out of his jaws. And it holds a long curved blade, which is almost the same scimitar as mine.
“You can’t win!” Mauloch growls, attacking, “Nine-times-ninety-nine generations of the nine peoples are mine!”

Step to the side, dodging… I can’t let him disturb the Dance tempo.
The Brass Tower keeps on breaking time and space, and I realize how to simultaneously dance on the God’s head and stand in front of the royal court of the Two Kings. I realize how it feels to be Gortwog… and Trinimac, too. I realize how to be that leader of one of the nine peoples who from now on has never bowed before the Serpent in a moment of weakness. From now on there has never been hesitation in choosing a master and fear of incurring the anger of them both. I realize how to be myself.
I take a hit. Although the creature shed its skin and made the replacement out of shit, it is still much stronger than me. The scab-covered hand tries to snatch the Totem. But if the demon expects easy victory, he is terribly wrong. The Dance turns into a fight…
…And so we stand on terra firma, amidst the Brass God’s wreckage. The demon stretches out fully, a naughty grin on its face, the obsidian toy in its hand, while I’m on my knees.
“Making your peoples wimps afraid of pain,” the creature snorts as it throws the Totem away, “You’re even more dumb than I thought. You doom yourself to failure from the very beginning, and what for? Your tribe is still mine, the god you’ve danced out is devoured by Boethiah, and I absorbed what’s left of him. Everybody hates you. Everybody despises you. You lose.”
I rise from my knees, foolish smile on my face.
“You didn’t get a thing, did you? Has your greed blinded you, Malakath? You tried to keep something that’s not yours and therefore acquired a splinter of one of the greatest heroes who’s remembered and revered by many folks. He is the opposite of you, and I can feel even now that he rips your gut apart. You won’t save from him even when the World Eater renews the world as well as you’ll never re-grow the old hide. I won. ” And I see in the demon’s eyes something what I have never seen nor expected to see. The horror. Its pursed lips are closed, there is not a single curse word. The creature simply disintegrates into acrid smoke.
I clear my throat before I get the father’s scimitar from the ground and fasten it to the belt. Then I head north-east, to the home I built for the homeless. To the place where one expects me.