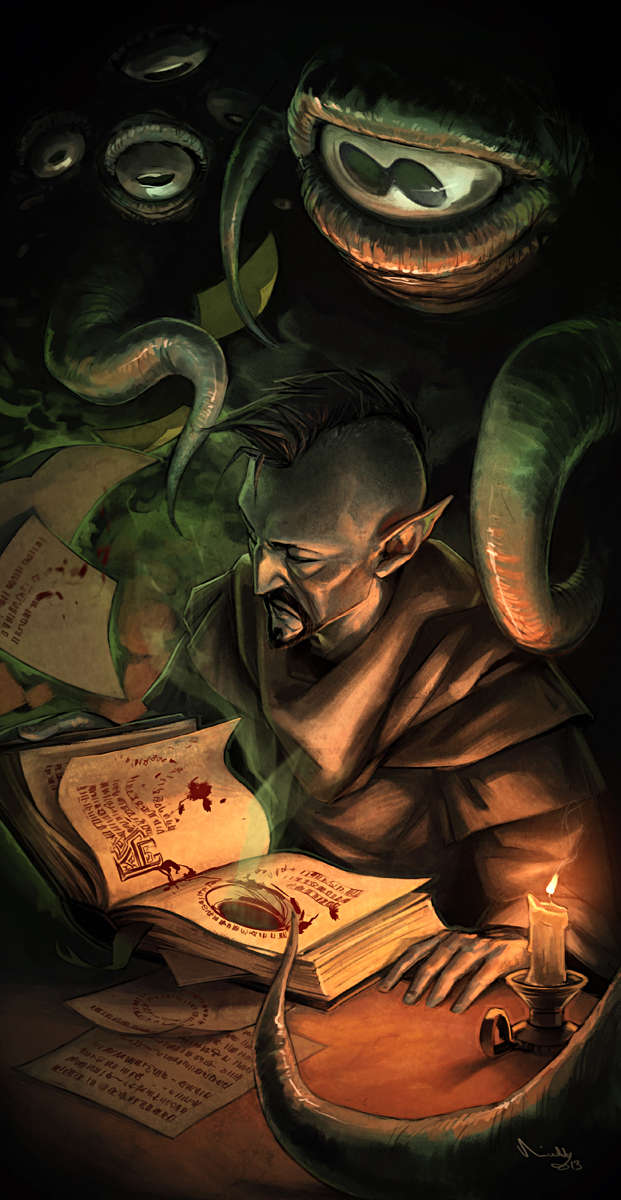 “By the Empyrean Light of Aetherius, may the Eye of Magnus always be upon me. Grant me the wisdom to use his gifts, and patience to know his wisdom.” [x]

“In Apocrypha, the Golden Eye weeps cold tears at this plague of ignorance.– We give you praise, Hermaeus Mora. We seek enlightenment, illumination, and a place at your side. “ [x]

—Script found within the Library of Evermore, derivative by a nameless author associated with The Order of the Crow. —

A studying mage within the school of alteration learns a basic and yet fundamentally crucial spell; Sphaera Lucis the Orb of Light commonly known and ‘Magelight’. Cast upon a shadowy room, the observer may see what was not seen before. Before them is a chair, a few pillars supporting the structure, and several rows of books aligned upon seven shelves no taller then a breton’s average height. One might question the existence of said objects without the light–absurd as it might be, but alone within this room the observer extinguishes the light to find that their sense of touch and memory guides them to the seat of the chair. The chair and the table still exist, and the shelves becomes apparent to the observer’s senses once the leathery spines grace their fingertips.

…but do the books exist to the observer if they can not read what is written upon the pages? The conceptual idea of that knowledge is erased within the darkness despite the existence of it’s physical form. Does that eliminate it’s existance to us, to The Eye, to Mundas itself?

The observer ignites their light once more to read the text upon upon the pages, but curiously enough the orb appears to cast it’s own shadows from the existing objects. The presence of these items of stimuli now become an anchor for the silhouettes of darkness that move and stretch as the the magelight changes it’s position. Despite the presence of the illumination, the shadows persists and directly correlate in a lingering sense, as if waiting for the light to extinguish itself and engulf the room fully into the Void of Sithis.

We, the observer, are The Eye. We feed from the light to see, but we also observe the shadows–a new presence that derives from The Void and manifests from the The Light–as an equally valid and often overlooked in the pursuit of knowledge. One can not claim to be enlightened without observing both the light and the darkness cast by it.

This is the duality of L’œil de la connaissance. The Eye of Knowledge.