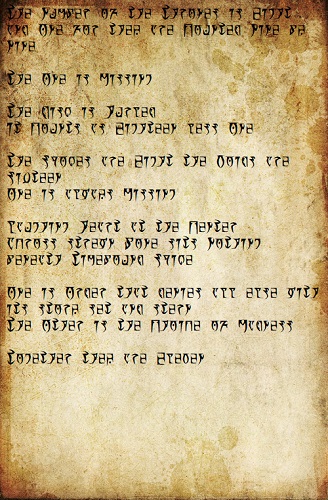 “…as you can see then, the iconography displays the balance of the classic Ayleid arcane numerical system. Any questions?”

A young woman amongst the group of disciples raised her hands. “But Master, you clearly said that the number is counted as Nine by Nine. Yet the artifact displays an odd count.”

The Master looked back and forth between the her and the artifact in confusion. “Odd? It is supposed to be odd. Why would it not be odd? Nay, why would it be even?” Shaking his head, the Master hurled the thing at her feet. “Here! Count for yourself what is notched on the disk!”

And she did, yet her confusion only grew.

“But this is Eighteen less one!” She cried. “How does Nine by Nine equal this?”

The Master thought her an idiot. Who taught this child to count, he wondered. “Or course is it is Eighteen less One! Line the Thrones Nine by Nine and you will find that they are Eight and One, as they have always been!”

“But Master,” a young boy said dazedly as he came forth from his peers, “how is such a thing possible?”

The Master looked at all his pupils in bewilderment. “Can it be? Have none of your previous teachers told you this simple truth? The One is Missing. It is always Missing! Hence the Eight limbs.”

The Master shook his head. “My dear children, did you not hear what I just said? There is One Missing. Always.”

He then pointed at the disk on the floor. “Look at it! Eighteen less One! Where is the One?”

The young woman peered forward and gave an astonished cry. “Why it is at the center!”

“Indeed, indeed!” The Master smiled brightly as he saw understanding in their eyes. “The One is at the heart of it all, but it is Missing. In fact, in its nature of being missed many have claimed it to not be at all. That it is, in fact, nothing. Now let me ask children, what is the nature of Nothing?”

“That is denies itself,” they said together.

“Naturally…but! I ask this: how can Nothing deny itself if it was never there to begin with?”

They all looked at each other for they had no answer.

The Master chuckled. “Nothing cannot deny itself for there is nothing to be denied. This, coupled with the fact that the center is Missing, means that it is not Nothing doing the denying, but rather Everything. After all, the Eight limbs come from the center, and it is not as if they themselves stem from Nothing. Nothing is nothing after all.”

And finally, after a hefty silence, one of them said, “But Master…is that not complete Madness?”

“Well yes…but that is the Order of things.”