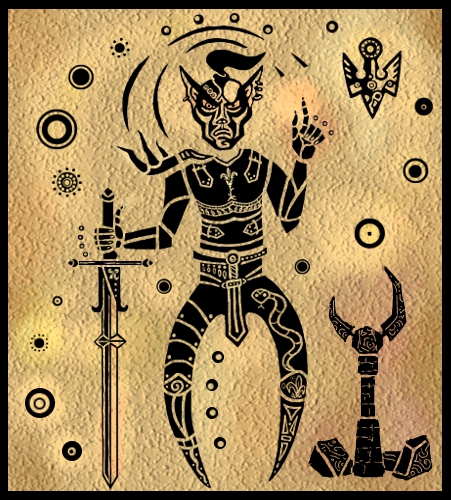 Boethiah burned with satisfaction as Man, Mer, and Beastfolk alike rose with roars of victory or fell with screams of terror. Tonal oaths and spun promises meant little at the end of a blade or arrow, the Prince mused. Even at the touch of a deadly spell would one’s own will become their definition unto or under their enemy.

The Mad Prince Sheogorath, ever arbitrary in his whims, concurred with Boethiah’s steep desire for bloodshed. He too revelled in the the nonsensical violence, crooning that his champion’s will would triumph over her own champion’s.

Boethiah’s eyes burned crimson for a passing moment at Sheogorath’s words. Then a smile cracked upon her face as she was inclined to humor the Mad God, if only to see the look on his face when her word triumphed.

Boethiah revealed her-chosen-self over the crowd of warriors. As usual, she took on the appearance of a hardened Dunmeri Warrior, clad in ebony armor stained with blood-red lines. Her eyes smoldered with sepulchre energy as the warriors held together a tense breath.

The Daedric Prince’s command was loud and true.

Her Gauntlet had commenced, heralded in war cries in various tongues and the sounds of blades swinging through the air. Blood sprayed from brother and sister alike, with all being equal in the heat of battle.

Boethiah’s gaze turned towards a Dunmer barbarian, who in combat was as savage as the Nords, and as crafty as the Cat-Folk. His blade was stained with the blood of those he befriended days before, though his name was nothing to her. Only his savagery would hold any significance. The numbers of foes dwindled down until only he and an Orc stood above the heap of the unproven.

The Dunmer’s face blinked in mild shock before his expression hardened. The Orc before him screamed in the name of Mauloch, his eyes bulged maniacally. Surely this was the champion which the Mad Prince spoke of, Boethiah mused, before the Orc charged forth.

The blade of the Dark Elf was thrust through the stomach of the Orc, who continued his feral assault. A dagger was dug from the Orc’s sheath and the Orc attempted to drive it into the chest of the barbarian Mer, who quickly grabbed a mace from a fallen foe and drove it into the side of his enemy’s head.

“You see?” Boethiah crowed, “their identities and wills mean nothing until one has triumphed through bloodshed. Now this little elf has proven his worth and being over all, my Champion at last.”

The Mad God laughed, “Is that so? You failed to acknowledge something I had known. The Orc and Dunmer knew each other since they were children. You could even say they were the closest thing to brothers.”

“What difference does it make?” Boethiah scoffed.

The feline eyes of Sheogorath shined with glee. “It makes all the difference to them. Look at how valor becomes shock. Survival becomes desperation. Victory becomes horror. Look upon the mortal’s face and tell me whose Champion he really is.”

And so Boethiah looked at the face of the Dunmer, who broke down into a shaking figure of grief beside the Orc. The Dark Elf’s red eyes stared blankly forward as his hands independently wiped the Orc’s skull organ upon his face, muttering in tongues incomprehensible to any ear.

The Queen of Shadows could not fathom this logic from Sheogorath, of all things. The Mad God himself said no more as he bowed and stepped backward into his realm with a grin on his face.

Boethiah fumed with dismay, as she parted the Dunmer with his head.