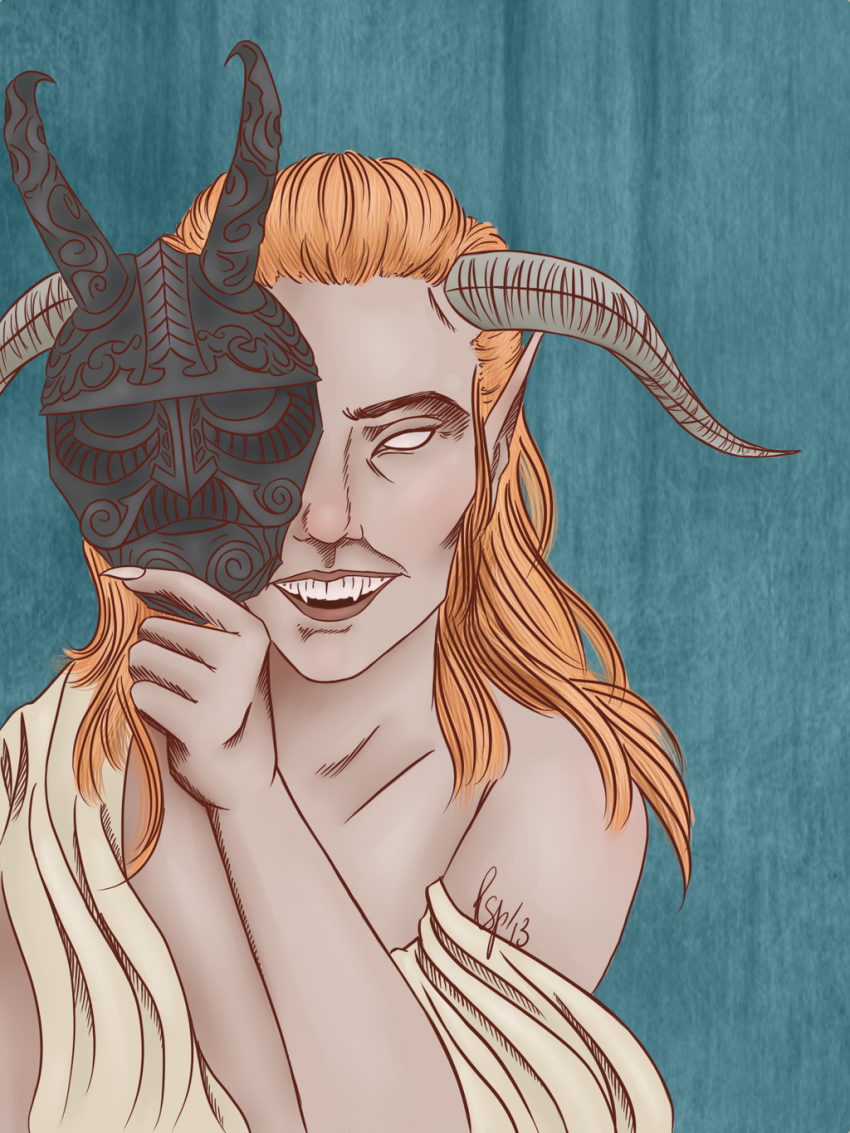 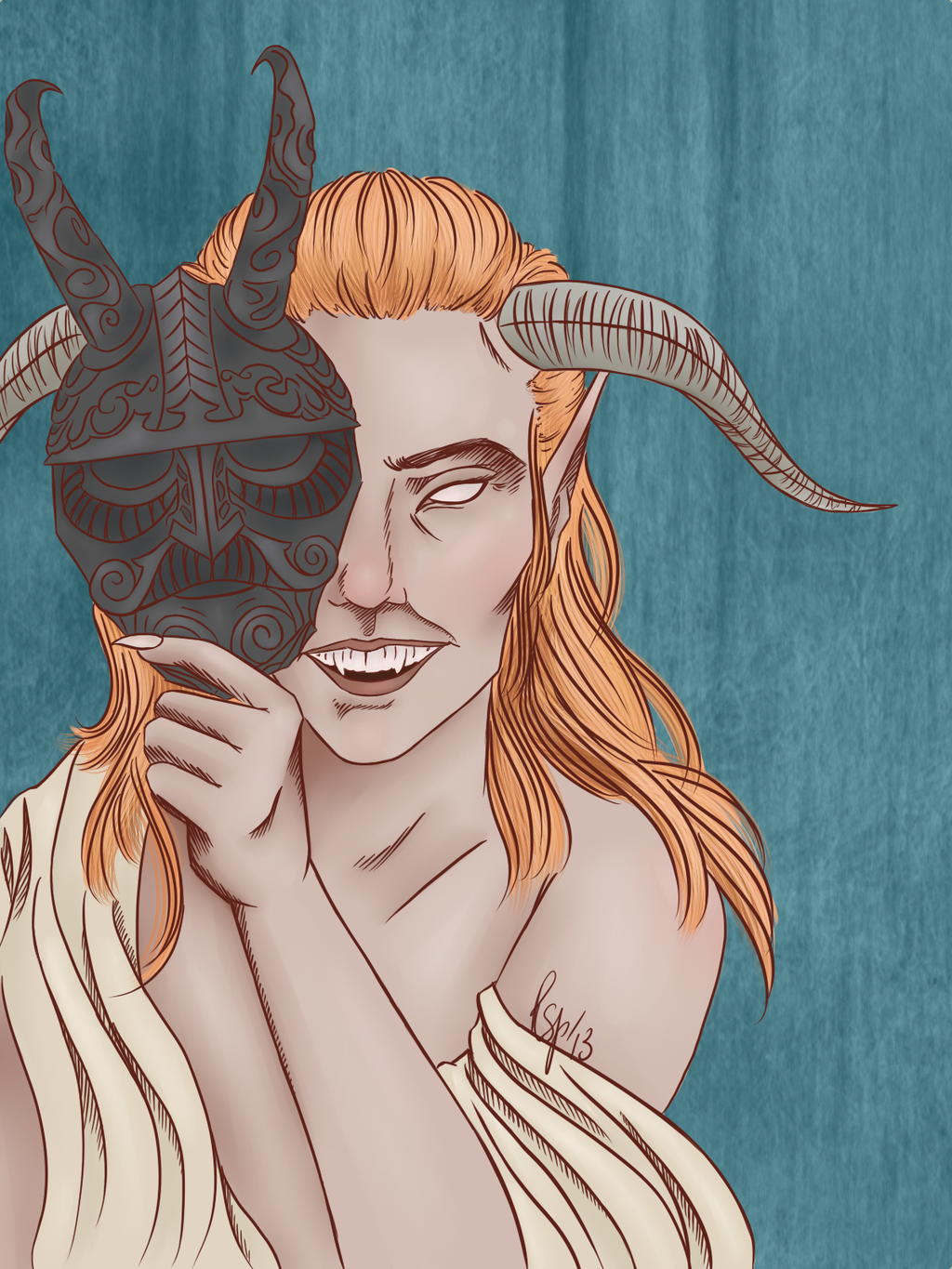 The subterranean hall was dark, in stark contrast to the light cast on the mosaic floor by the doorway, punctuated by the elongated shadow of a bent and spindly figure. A vague draft whispered through the angular pillars, and a lone column of light crashed upon a titanic marble throne. A shaggy brown dog sat panting at the throne’s base, his heavy breathing echoing through the stone hall,the reverberating sighs stretching into the pitted darkness, clashing with an otherwise still tableau.
Upon the throne was seated a figure, who shifted his weight in boredom. He was small in stature, situated in the middle of a seat far too big for his frame. His arms were outstretched to grip the armrests of the throne with his clawed hands. Upon his face rested a silver mask with curled horns and a mustachioed visage. It seemed comically large in comparison to the rest of him.
Footsteps reflecting through the cavernous hall, the figure shuffled towards the throne and its shower of intense light. His cane added another harsh echo to his movements, complementing the scraping of his feet.
“You come before Clavicus Vile, mortal,” said the being on the throne with a child’s voice. His speech was muffled by the undoubtedly heavy mask. “Tell me what you seek.”
The old man stopped. His feeble, wrinkled face rose to meet the dark eyelets of the mask so high above him. His brow was distinctly prominent and his nose was crooked and hooked, as if it had been broken a time or two in his youth.
“My lord, I-“
“First,” the Prince interrupted. “You must offer respect to my Hound. I can’t think straight when my poor doggy sits unacknowledged. Pet him.”
The old man turned his glance to the dog and reached out to scratch him behind the ears. Barbas accepted and stopped panting to enjoy the scratches. The old man glanced at Vile as if to gauge whether he had fulfilled the Prince’s demands.
“Now tell him he’s a good boy.”
“Y-you’re a good boy-“
“Barbas. Go on. Tell him.”
“You’re a good boy, Barbas.”
The seated child clapped his hands joyfully.
“Good! Now, what were you saying?” The Prince shifted over to the armrest and rested his elbows upon the marble, balancing his head in his hands, watching the old man intently.
“Lord Vile, I am a merchant from Wayrest. I’ve spent many decades shuffling papers and weighing gold, but this prosperity has never brought me what I truly desire.”
“You’re old,” Vile giggled, as if this were a new observation. “You have money, but still you come to me? What for? Are you looking for more time?”
“As you said yourself, my lord, I am old. But what I’ve always wanted is recognition. I want to be known for my efforts. I want my people to remember me. Because I have lived a long and fruitful life, all I am concerned about is my legacy.”
“You want the people of Wayrest to remember who you are? You wanna be famous?”
“Just so, my lord.”
“And what do I get in return?” The child asked.
“I suppose you want souls, but what if I could grant you souls other than my own?”
“You’d offer me the souls of others?”
“Yes, my lord. I have wealth to my name, and the collection of souls is easy to pay for.”
There was a pause.
“So we are in agreement, then? I give you your fame and you bargain for souls on my behalf?”
The old man hesitated.
“Yes, I agree.”
Vile clapped his hands and laughed. “Oh, goody! I love new toys! Barbas, go fetch me one of those fancy watering cans.”
Barbas stood and cantered into the imperceptible darkness, the clicks of his claws fading away in the distance.
“A… watering can, my lord?”
“Well how else am I going to change your soul? I need a container for it, silly.”
“Change my soul? But my lord, we agreed-“
“We agreed that you would collect souls for me,” the child’s voice grew harsh and scolding. “We made no provisions as to what I would do with your soul.”
Barbas returned with a golden vessel clamped in his jaws. It looked somewhat like a tea kettle. Around the rim of its mouth, there were runic inscriptions in some language the old man couldn’t make out. As Barbas set the kettle down, the runes glowed red. Vile flicked a clawed finger and raised the kettle into the air. The old man felt a tug at the base of his spine and felt his feet lift from the ground, his cane clattering to the mosaic stone.
“My lord, please, no!”
“Isn’t it funny how he begs, Barbas? The little man and his silly wants. I’ll give you what you asked for, little old man. Now hold still.”

The old merchant Pauvre had disappeared without a trace, and the people of Wayrest were overcome with concern for the wellbeing of the old man. With no family ties and few close friends, the community took pity on him. Some wondered if he had wandered into the wilderness to seek a peaceful death. Others wondered if he had been kidnapped or murdered. For years to come, the anniversary of Pauvre’s disappearance was celebrated with festival and song, reminding the people of Wayrest to cherish their elders and appreciate what life has afforded them.
However with the rising popularity of the Festival of the Vanished Merchant, the rate of disappearances rose, as well. At first, some thought festivity was to blame, and that the fair people of Wayrest were taking their celebrations of the Festival to new extremes. Late at night in the shadowy alcoves, far away from the crowds and lights and celebrations, rumors spread in hushed tones that the disappearances were the cause of a fell beast. Few had caught so much as a glimpse of the brute. Those who had described it as a shrouded and skulking horned creature with a protruding brow and hooked crooked nose.