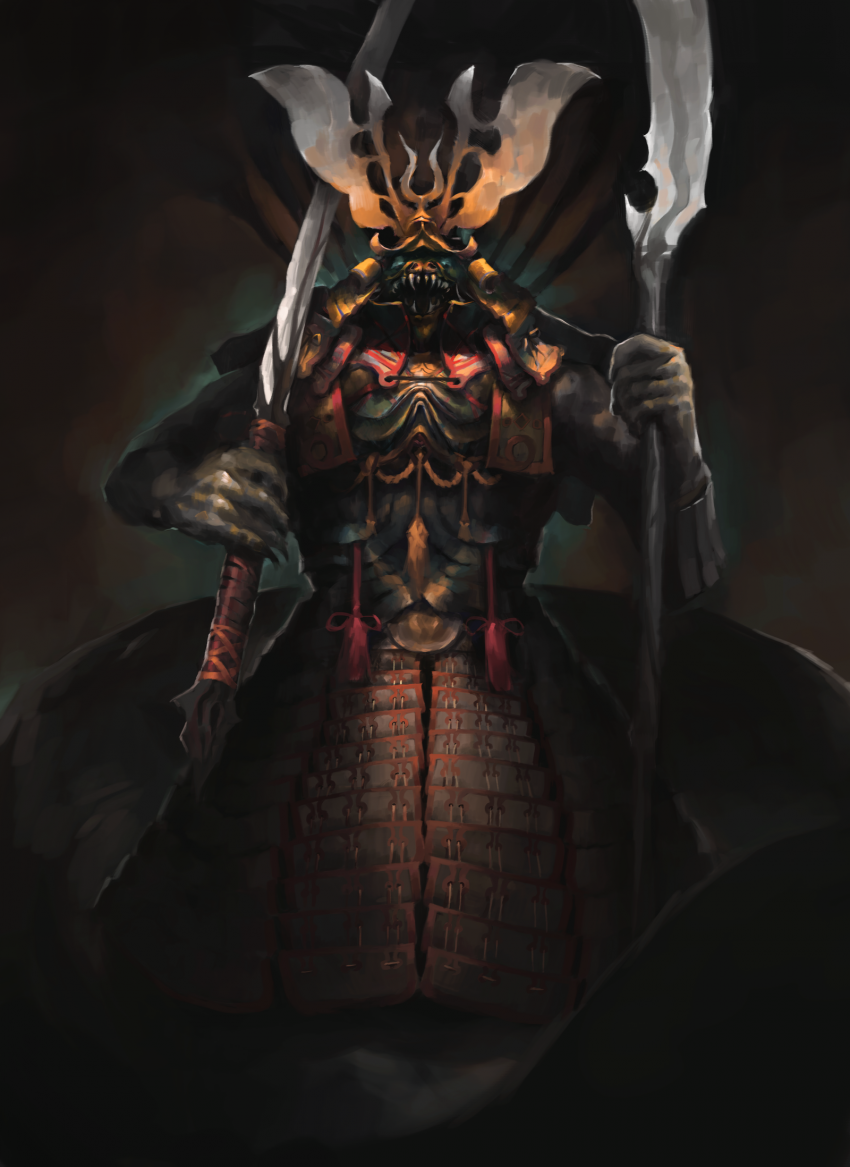 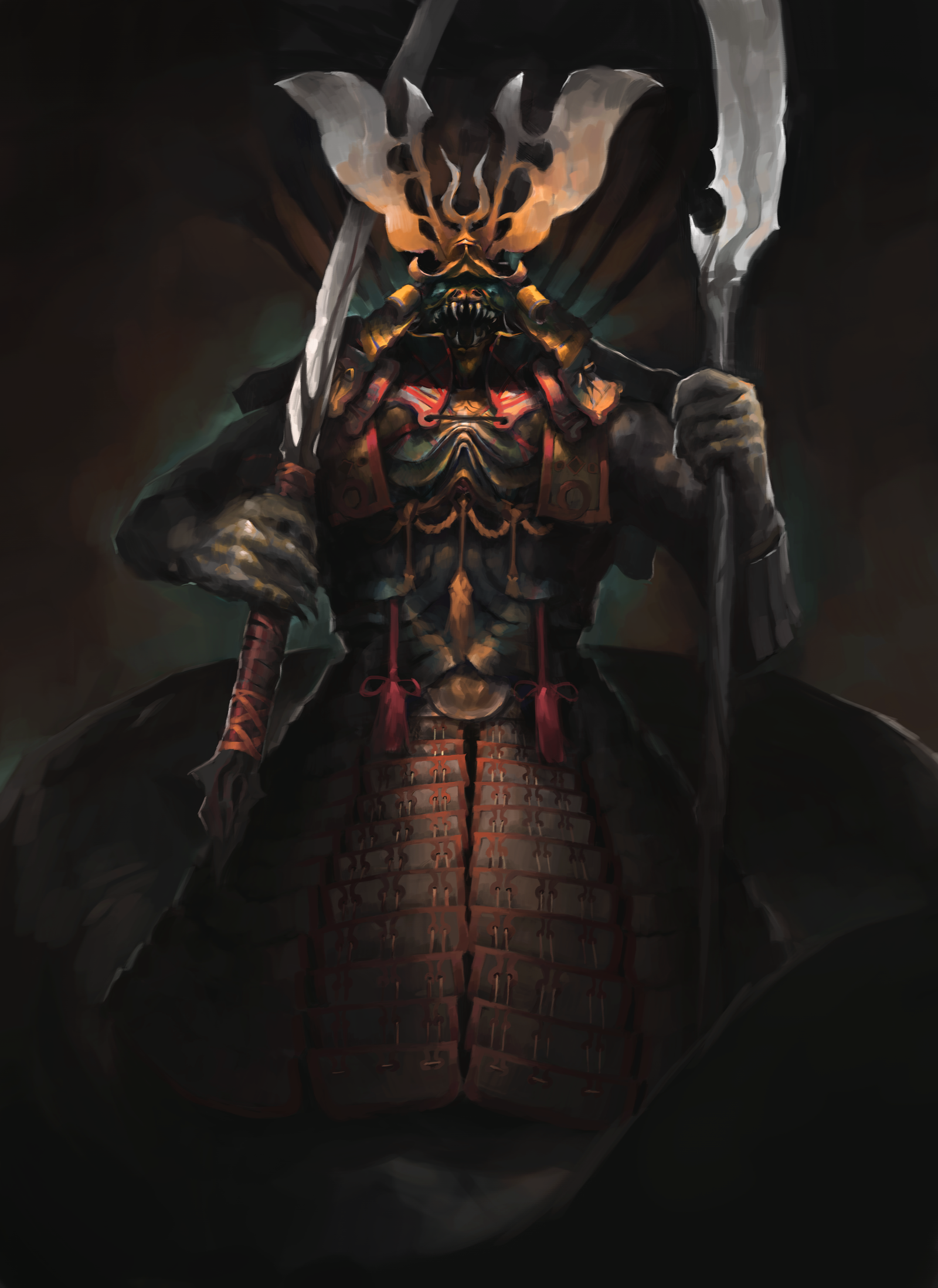 […]
When we first met with emissaries of the Tsaesci I was surprised, if not a bit disappointed, to be welcomed by an Imperial (or so I thought, at the time). That is to say; a bipedal, soft-skinned, man-sized being of light-brown complexion. Apart from the accent, there was no distinguishing him from the members of our own party – disregarding, of course, his alien looking armor, and the large dai-katana he wore on his back, which back home would’ve been reserved for Blades and Moth Priests.

The envoy, who identified himself as Sahorek-navir, invited us to follow him to the nearby city of Zasnachise. And although we were really not given much choice (he had brought a cadre of like-armed men, who would clearly not take no for an answer), we gladly followed, excited to meet more of their people – but not without a hint of fear, of course.

When our convoy arrived at Zasnachise I was excited, and somewhat relieved, to find that the snake-men legends so often told of Akavir and the Tsaesci were not entirely untrue.
The city itself was worth years of study; an infinity of sandstone bridges, smooth winding staircases, and great towers that slithered impossibly high into the sky. But my focus was alone reserved for its people. I saw plenty of ‘men’ akin to Sahorek-navir, but also the famous snake-men, and others, more akin to Argonians. Indeed, it appears that the architecture was made to serve slithering snake-men and bipedals alike, featuring not a single proper staircase, but rather a mixture of smoothed ramps and intermediate stepping stones, so as to [illegible, the text is smeared out of recognition]

I’ve been busy compiling information about these Akaviri, their culture and their biology. But one question was more pressing than any other, and while this vile fever hampered most of my research, I am glad I could answer this one, burning question. How do creatures so distinct all belong to the same species?
Sahorek-navir provided an answer (which frankly just invited more questions); The Serpent. He maintained that when a Tsaesci egg hatches, regardless of its parentage, the offspring would be defined by the position of the sign of Serpent. As it wanders across the night sky, the mysterious constellation defines the race of Tsaesci hatchlings.
My fellow expedition members viewed this idea with perplexity, if not outright scepticism. But having studied Khajiit and the influence of the Lunar Lattice for some time back in Tamriel, I believe I was more open to the idea than my fellow researchers, indeed… [illegible. A large bloodstain covers a great deal of text, only worsened when someone apparently tried to wipe it off]

… The Ehlnarax, as Sahorek-navir named them, looked like distant cousins of Cyrodilic Imperials. But first-impressions were deceiving and, after being allowed a closer inspection, several distinctive features revealed themselves. First and foremost; the differences between Ehlnarax and Tamrielic man only become apparent when stripped of armor. While Ehlnarax are mostly covered in soft, mammalian skin, several blotches of scaly tissue are found around their bodies – centered around areas of higher stress, such as the elbows, kneecaps, footsoles, and along the spine. After a great deal of negotiation, and continuous insurances of my purely scientific interests, I was allowed to examine an Ehlnarax in the nude. And to my astonishment I discovered reproductive organs (essentially) identical to those of man and mer back in Tamriel. When I asked Sahorek-navir how Ehlnarax coupled with the strikingly different Kaha’runi or Zarlasehn, he simply answered that they could not. Indeed, the Ehlnarax are so similar to us Cyrodilics, that I have become convinced that the ancient stories of Akaviri-cyrodilic halflings were no mere myths or odd symbolisms.
Another striking feature is the *abundance* of Ehlnarax. Among the Zarlasehn, Kaha’runi, and Ehlnarax the latter is the most common, making up well over half of the species. When asked of the subject, Sahorek-navir explained (to my astonishment!) that an egg laid by Kaha’runi or Zarlasehn could birth into any of the subspecies, but an Ehlnarax offspring would, of course, never grow up to birth a Kaha’runi or Zarlasehn.
In short; a coupling of Kaha’runi or Zarlasehn could produce any Tsaesci, while the Ehlnarax might only reproduce with others of their kind, producing invariably Ehlnarax children.

The Kaha’runi remind me, most of all, of Tamriel’s Argonians. Though tail-less, their bipedal movement and scaly hides bear striking similarities to the denizens of Blackmarsh.
The Kaha’runi, however, distinguish themselves from Argonians in several regards. The lack of tails being only the most striking. The Kaha’runi also have no further teeth besides their double pairs of fangs, prefering instead to tear food into smaller morsels (using them ample claws) and swallowing it whole.
I’ve also yet to find any Kaha’runi to bear horns like Argonians. Instead, the Tsaesci have feather-like protrusions covering their scalps, ranging from a near-invisible down, to grand and beautiful peacock-like patterns.

The Zarlasehn will most closely resemble the average Tamrielic idea of Tsaesci. Their upper bodies resemble an argonians scaly (yet nearly mammalian) torso, but below the waist their bodies extend into a thick tail – if tail is even the right word. They appear, quite simply, to be part snake and part man. Many do not understand Cyrodilic, and the ones that do speak it with a slithering lisp that is almost impossible to understand (thankfully Sahorek-navir is fluent in Cyrodilic, and has acted as our translator). The Zarlashen further distinguish themselves from their cousins by never wearing armor or clothing of any kind. They may assert wealth and social standing through jewelry, and richly ornamented katanas, but aside from that remain entirely naked – unlike Kaha’runi and Ehlnarax, who wear clothes and armor akin to their Tamrielic counterparts.

I am of two minds as I attempt to finish my notes. On the one hand I’ve dedicated my entire life to the study of Nirn and its amazing lifeforms.
On the other hand the fever is racing through my veins, and as my eyesight fails me and cold drops of sweat fill my every pore; I know that I must soon die. The healers (the few who are left) can do nothing more to me. This damnable akaviri fever is beyond their knowledge. So many of us have died already, and I know I shall soon be next.

It pains me that these notes shall never reach their audience – shall never make it to Tamriel. But nevertheless I feel I must write until my hand cramps, or my breath fades away. If not for the progress of knowledge, then at least for my own sanity and the memory of so many dead comrades…