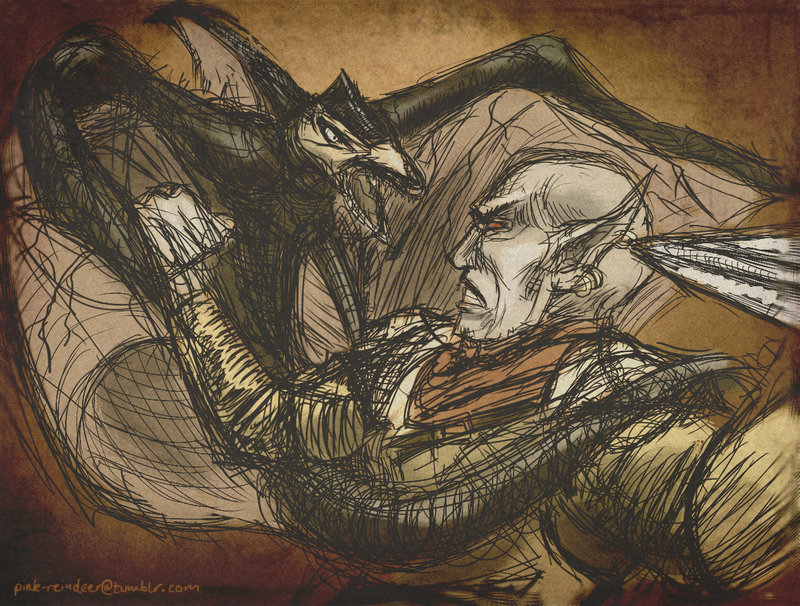 My name is Kyndlattiamallariyeceybal, but no one calls me that. Everyone who knows me calls me Jiub, for when I was given a Cliffracer figurine to play with as a child, I instantly broke it, and we know Jiub was a saint who broke Cliffracers.

But I do not write my words here because I wish to be remembered as a saint. I do it because I have always been interested in history, and I have always wished to assist in its endurance. This avocation of mine is, however, difficult – given that most history is now gone.
When the Ambitious Congenitor had its way and burnt the land much knowledge was lost. When the dragon broke the oceans even more was evicted to nonexistence. But I am getting ahead of myself. Or perhaps I am not, time is a weak and broken thing these days… months? Years? I do not know it. When the Return came I knew things were going to get bad – or worse, rather – so I had the Brasswizards of the Telvanni make me this pendulum, and eat the air from its box that it may swing without interruption. And so, by brass and magicka, I count my own time.

We are called dunmer, and we know we have not always been called so, but we truly know little more. Only three eras are known to us now, what came before I do not know, and what comes after I dread to imagine.

The Golden Era began when the Bruised Gold wrote itself into infinity by grace of its purloined godhood. It is ironic that it be called the golden era, for it is estimated that we then lost our golden skin, and were made to look as ash.
There was a long or a short time of peace before the empire of man took the land of the dunmer. Many were angry, but Hlaalu was happy – until their happiness got them killed, but again I am getting ahead of myself.
There was a long or a short time before the Bruised Gold fought with his Sallow-faced old friend, and only won by grace of another lost friend, long dead and scorned. We know that this happened, and that it broke something valuable, some coveted artifact since lost to history.

The Red era began sometime after the Bruised Gold was stolen away from the dunmer, and it is characterized by a lot of things going very wrong. What was Vvardenfell was lost, and many dunmer found refuge with reluctant men in the north.
It was during the Red Era that the Congenitors saw their chance to sow chaos and revolution across Nirn, turning it into the churning morass that they so desired.

The Destructive congenitor was not satisfied to sink Vvardenfell, and he sent the red ash clouds far north, much farther than ever before, and the ash fell heavily in the north. And in the south angry things came from the swamps and sacked many cities.

The Mad congenitor was not satisfied to shatter the Bruised Gold (city-like), but put a mad jarl in the north, who hated the gray skinned and blamed them for everything. And so the Gray Quarters were scourged, and the College Unsunk was sacked in fire, for providing gray skins with sanctuary.

The Forceful congenitor was not satisfied that the dunmer were broken and scattered, but saw that the dunmer must toil as slaves, for he had sense of irony. And so the dunmer became the gray skinned slaves of men, and the men of the middle, who governed the north, allowed this, for they were not the power that they once were.

But now the dunmer were outcasts, and the congenitor like dung took pity on the dunmer, who were now like him, and he taught them the violence they had forgotten, and they rebelled and fled to what was left of their islands, and the Telvanni bound the lands together with deep-set mushrooms and skyreaching towers.
And for a long or a short time there was a peaceful land named Morrowind.
But beyond the land of Morrowind the Troublesome congenitors still thrived upon the chaos of the Arena. The moths in the middle were broken by Trinimac’s Knights, and men there were made slaves like the dunmer had been. Telvanni and Redoran celebrated what they called poetic. Hlaalu was only dead.

It was about this time that the World-Eater’s soul awoke from its slumber, and found that it was time to eat the world.
He came first in the north, and he spoke with loud wind the words: *AL-DU-IN*, and ate the Sea of Ghosts, and much history died then. The Nords, who were the first to fight the World-Eater, despaired, for they had no dragon-eater to shout him properly dead. It was then that they remembered what they did *the first time*, and they tried to use an ancient scroll to send him off to somewhere else. The World-Eater must have learned, however, for he only ate the nords and their scroll.
When the nords failed, they decided that nothing could be gained from the past, and they lost the fight and were eaten.

It was some time after this that the forsworn of Auri-el became fearful that they would not escape MUNDUS in time, and that they would be eaten by the dragon. It was then that the Mirror-Mages of Summurset bent magicka into unnatural angles and brought forth from not the Walk-Brass. And Numidium took up the fight with the World-Eater, replacing reality as fast as he could devour it. And it was then the knights of Trinimac decided that much could be gained from the past.
And Walk-Brass killed the World-Eater, and killed him again, and again, and again as I have lost count among the strokes of the pendulum. The death(s) of his son must’ve hurt AKA, for time is now hard to grasp, and many years pass by every hour, and the knights of Trinimac used only their minutes to destroy so much.

I know not how long our era has lasted. I can only say that it is ninetyeightmillionsevenhundredandseventysixthousandseighthundredandeightynine strokes of the pendulum since I declared a new era and begun this document. Why did I declare this new era? And does anyone care? First; because what Trinimac’s knights are doing seems important, and it seems dangerous. Secondly; probably not.
The cave was broken up in the belly of AL-DU-IN, and its tower crushed to nothing; and the Thalmor ate the Sap Fruit and burnt the tree with congenitor magicks, and now they are knocking on the doors of Ur. I do not know how long they have been trying, and I do not know how long it will take them. But I feel that they will succeed *eventually*.

I sit alone by my pendulum and write in solitude; for I am shunned now by my peers and family. I do understand them; they think me mad. And perhaps I am; but it is not the Mad congenitor whom I have now devoted myself to; it is his sprawling brother.
The Bruised Gold spoke to me – in a dream or before my waking eyes, I do not know- but it spoke to me, having made itself wake. It gave me a warning to give unto others – for it is too late for us now, too late for me. The sons of Auri-el are knocking on Zero, and want to break its stone, and AL-DU-IN cannot eat the Walk-Brass fast enough.

But I sit here alone and write in solitude and I pray to the Old Antecedent that his long halls might bring my words back to someone who has time yet.
The Bruised Gold spoke to me five lines, and through toilsome analysis and Scryer I have divined them from my dreams, and write them here now that my Lord might reach back and help the past.

The era is of The Return, for the Bruised Gold woke and gave its final gift to the dunmer, and I bequeath it now unto you.
– With love, Jiub