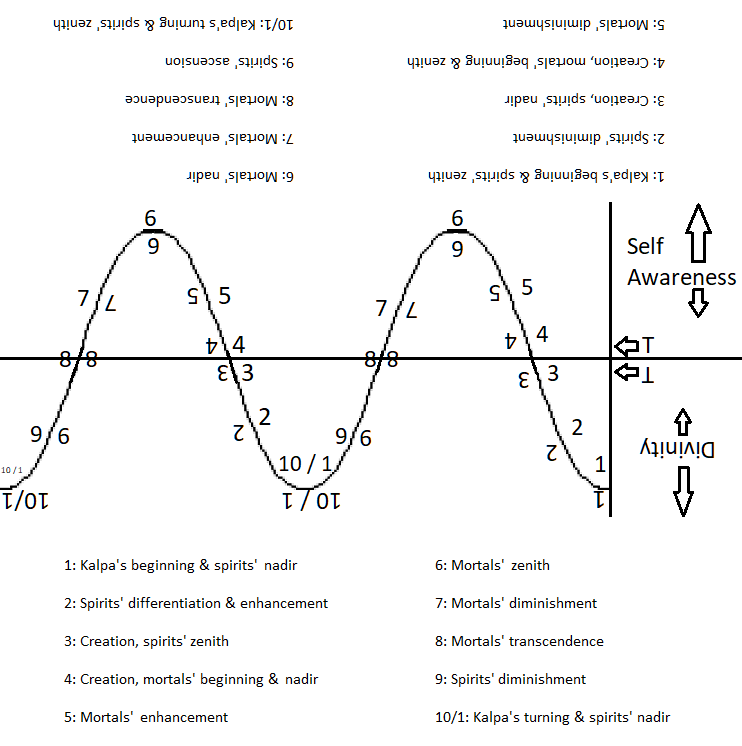 This originally began as a collaboration expanding upon LadyN’s concept of the Parabolic Kalpa:

“The parabolic kalpa relies on the idea of flux. It relies also on the assumption that the divine is real and relevant, and that we descend from it. As time goes on we are separated more and more from divinity, ultimately reaching a bottom below which we cannot drop. After that extrema, we start to re-discover our connection with our makers, and ascend back up the sides of the curve. As implied by the image of the parabola, the descent is at first very fast and then flattens out and becomes nearly negligible, before steepening again on the ascent.
The connection with the divine can manifest in many ways. Most obviously, it is our separation by birth. The first, sharpest, drop was the first man, mer, or beast born on this world. Connection can also be knowledge – the first peoples had much more understanding of the nature of the world than we do now. Information is lost, forgotten, and misinterpreted, which manifests as the downward curve. Our general faith is of course another variable: how strongly do people believe in our gods and in our fathers? Splinters in philosophy and in religion cause further drops as people venture further from the truth. The upward ascent is governed by similar variables.
We know that our time began with the creation of the mortal plane by the gods, and the subsequent evolution of mortal life. It has also been theorized that the beginning (creation) of our time (kalpa) is indeed just the end of another time. The Dawn, of course, is so connected to the divine that we are hardly able to discern its events. We know that God and Man walked side by side, and that Towers, whose purpose is now all but forgotten, were the cornerstone of all Elven society. Alessia, Morihaus, and Pelinal’s numerous incarnations are not out of place in the early first, and neither are the God-Kings of Morrowind or the Brass God of the Dwemer. Even the conception of Reman Cyrodiil late in the first era is fantastical in comparison with the mundane births of our modern emperors.
All this leaves us with the question of where on the parabola we are currently located. We are doubtlessly towards its flatter bottom, though we cannot know for certain whether we have passed the minima and are on the ascent. I would argue that we are, as evidenced by the recent events throughout the Empire. In Morrowind, Lorkhan’s heart has been destroyed (liberated?) at the hands of a mysterious reincarnation of the cultural hero Nerevar, Sotha Sil and Almalexia are dead, and Vivec has disappeared after a most unusual trial. In Cyrodiil, the Dragon Fires have been extinguished, the Amulet destroyed, the Septim line broken, and Dagon defeated by Akatosh himself. Subsequently, Umaril Half-Elven returned from the Aether, and was once again banished with the help of Pelinal Whitestrake. This increase in mythological activity, and the rise in awareness of the subject that comes along with it, must mean that we are on the rise towards a greater unity with the divine.”

It was from this concept that Khajiiti M&M first developed his own initial illustration of the parabolic kalpa, depicting its cyclical nature and the threshold between divine and mortal: 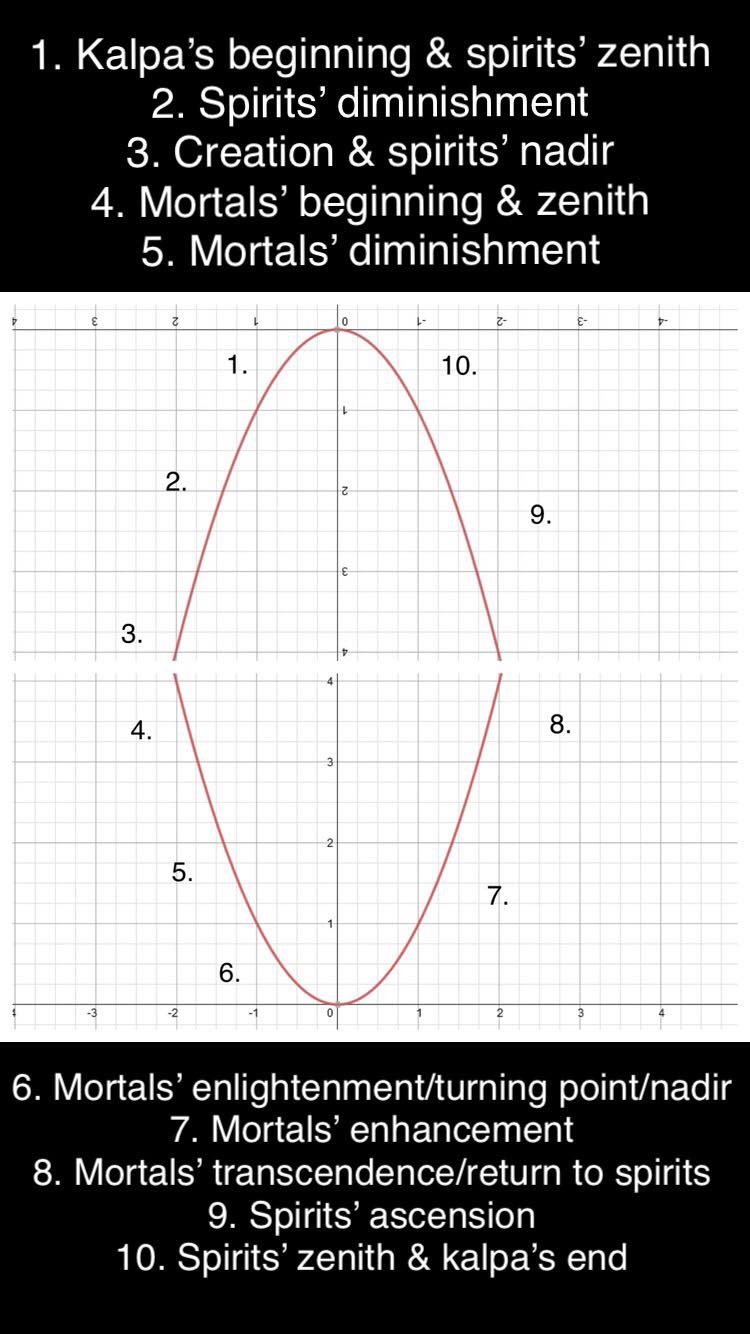 It was in discussing this image that our collaboration began. Khajiiti M&M’s numbered list goes through milestone events which reflect the course of the cycle, from divinity to mundanity to divinity again. He offered the following description of his list:

“1. From the frictional intercourse between Anu and Padomay arise the et’Ada (“Original Spirits”). Once these Spirits crystallize, they are at the height of their power.

2. It is reasonable to assume there is conflict between the Original Spirits. If nothing else, at least two factions form in response to the proposition of the creation of Mundus, the mortal plane. Those Spirits commonly referred to as “Aedra” are those who—initially or ultimately—accept and participate in the plan; those Spirits who reject the plan outright are those commonly designated “Daedra.” They are mighty, yet they now know rivalry.

3. It’s at the moment of creation, that the Original Spirits reach their nadir, their lowest point, for Mundus was wrought only by sacrifices of their inherent power. The Spirits are permanently sundered (e.g., some become the Magna Ge, who forswear creation and flee to Aetherius; some become the attendant Aedric plane(t)s of Nirn; some become the Ehlnofey, progenitors of mortals and the natural laws).

4. The moment of creation is, obviously, the point of inception for mortals, beings connected to and deriving from the Spirits and the spiritual realm, but distinct, for they are physical. It is at this time that mortals are at the height of their unification and power (e.g., the Men of Atmora, the Elves of Aldmeris).

5. The diminishment of mortals is seen in the disharmony that characterizes their histories. The Chimer defect from the Aldmer, become the Dunmer, and build a society on the backs of Khajiit and Argonian slaves. The Bosmer isolate themselves from the rest of Tamriel’s denizens within the eaves of the Green. The Direnni Altmer of High Rock raise themselves above the inferior Men, but unintentionally give rise to the Bretons, who they consider mongrel halfbreeds. The Falmer are slaughtered by Men and betrayed by the Dwemer. The Imperials and the Ayleids war with one another, slaves against masters.

6. It’s when point six is reached that the projection of mortals begins, and they arrive at rock bottom, however that may end up manifesting itself. Out of this mire the mortals will begin to self-improve; let’s consider the Altmer. This turning point would be for the them the eradication of Men.

7. By the time the Altmer reach point seven, most Men have been exterminated, and they are preparing for the moment of transcendence from the physical to return to the spiritual.

8. When the Altmer reach point eight, it is the point of transcendence, and they are returned to the spiritual as spirits themselves.

9. By point nine, the Altmer have enhanced themselves through their newfound freedom, but it isn’t enough. They are not yet as mighty as the Original Spirits were in their beginning at their zenith, so they hone themselves further.

10. At last, the Altmer-as-spirits reach their zenith, and they are as the Original Spirits were at first. Alas, this is but the kalpa’s end. They have completed the circuit, closed the circle, and all is pre- and post-kalpic darkness once again.”

It was in trying to assign factors to the X and Y axes of this diagram that I had trouble, yet I soon found a rather simple way to fix that. “What if we just shifted the lower parabola to the right?” It was with this question that we came to the model of the Transverse Wave Kalpa. Khajiiti M&M created a new diagram to illustrate this, and published it under the title SUA CULPA, NOSTRA CULPA: A Dour Kalpic Projection for the Altmer. 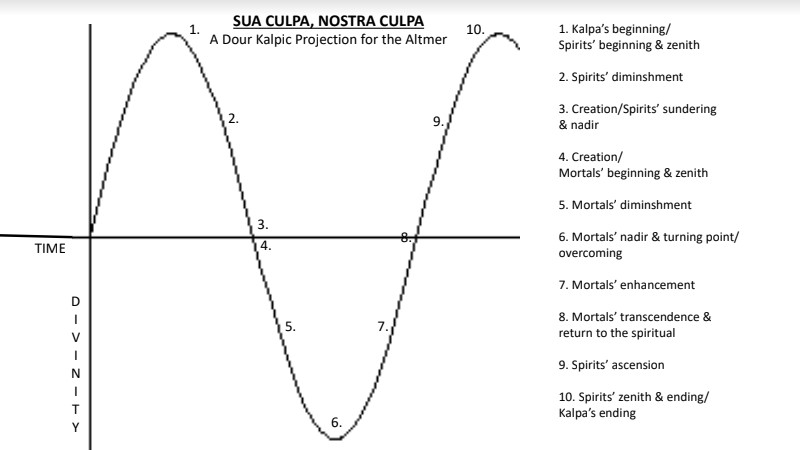 Immediately after the birth of the Transverse Wave kalpic model, I had begun thinking about the inverse relationship between divinity and self-awareness. The less subgradient an entity is, the less self-aware it is, and unity with the unconscious Dreamer itself is the terminus. Think of a mortal as Anu experiencing his Dream, and think of a Daedroth as a manifestation of Anu’s emotions. One is self-aware, the other is like an unconscious neurochemical response. Necessarily, then, this same model – this very same image – could represent the inverse course of self-awareness over time. All you have to do is flip the damn thing upside-down. And so I created this image: 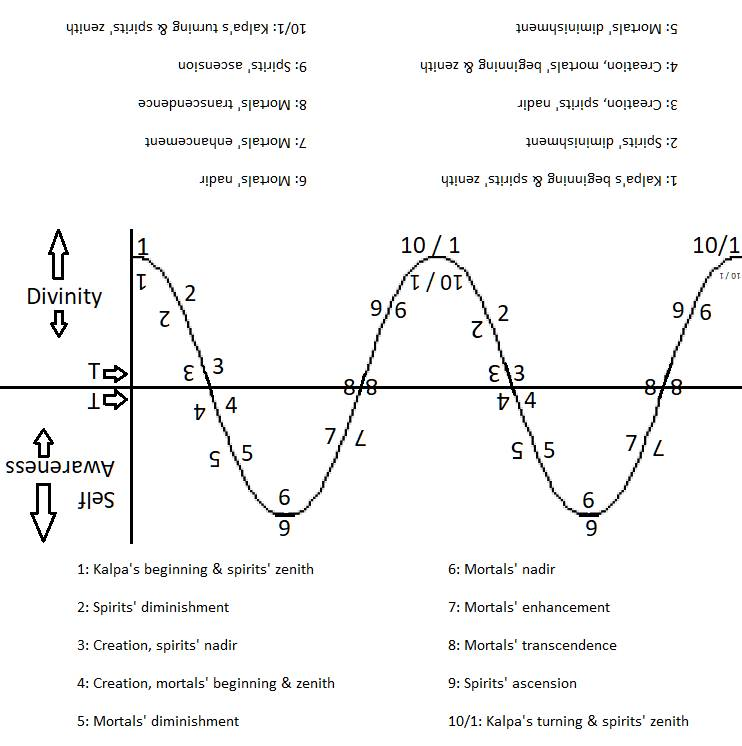 The cycle is therefore thus:

(1) The mind of the Dreamer begins as the white noise of Stasis and Change. The Dreamer’s mind and all its facets are unified and undifferentiated.

(2) In the intermingling of the two are born Time and Space, and from their birth arose innumerable contingent facets of Anu’s psyche. All of them are divine, and all of them are below the threshold of self-awareness. As the differentiation of spirits from the background radiation of Anu’s mind continues, those spirits attain the slightest semblances of self-awareness, in their identity. However in this they have also found themselves in slight disunity with the Dreamer, and so the descent from their zenith of divinity begins in tandem with their ascent to self-awareness.

(3, 4) In the moment of Creation, the spirits sacrifice of themselves their divinity to create a new world, one of manifest metaphor and skins sewn from ideology. The majority of the lesser spirits subgrade further, and the world of mortals is born. In the creation of mortal existence, the lesser spirits, those Old and Wandering Ehlnofey, have (intentionally or not) sacrificed their divinity to experience a truly self-aware existence. The superego and id of “IS” and “IS NOT” have met at the mediating center of the conscious ego, the Grey Maybe, the Arena in which these opposing forces shall clash and resolve: Mundus.

(5) As mortals stray further and further from the understanding of their ancestors, they build more and more upon the cultures and societies they have created for themselves. Perhaps it cannot be said that they are truly more self-aware than they were at the birth of Creation, and perhaps it can be so said. However, it is certain that the further they stray from divine understanding, the more secure their self-aware existence becomes as the threat of divine transcendence diminishes. “Connection can also be knowledge – the first peoples had much more understanding of the nature of the world than we do now. Information is lost, forgotten, and misinterpreted, which manifests as the downward curve.”

(6) Here mortals come to the point where they will never stray further from the divine than they have. The nadir of their connection to divinity, and the zenith of their attachment to their self-aware existence within Mundus.

So, that’s the model itself. But how well does it work with different mortal cultures? Obviously, Altmeri culture is quite in line with this sort of model, but what about a more mannish culture, one with a rather different eschatology? What about the Nords?

Being divided in the way they are about the role of Lorkhan as being savior or devil, perhaps the mannish (minus Bretons and Redguards) and merish (plus Bretons) races would pay selective attention to the Self-Awareness and Divinity courses, respectively. However the model nonetheless works as well with Nordic culture as Altmeri.

I had first questioned my own idea, challenging it with Alduin. “Wait, how can this work if Alduin comes to devour the world and all its mortal inhabitants? Wouldn’t that be for the kalpa to turn before mortals ever became one with the divine again?”

And the answer is quite simple, after consideration: no. After all, Alduin is destroying everything of Mundus. The spirits which formed it and its mortal inhabitants are returned to the Dreamsleeve, becoming one with the unconscious Dreamer again. That is, until the silent darkness of Anu’s mind erupts once more with the initial declarations of “I AM” and “I AM NOT”, and the cycle begins anew.

Fun fact: When creating this graph, I specifically made it in such a way that, when tracking Divinity, it flows to the right, and when tracking self-awareness, it flows to the left. This is meant as a little nod to the Right Handed Path (Zero-Sum, unity with the unconscious Godhead), and Left Handed Path (CHIM, the path in which one achieves self-awareness and asserts their own existence).