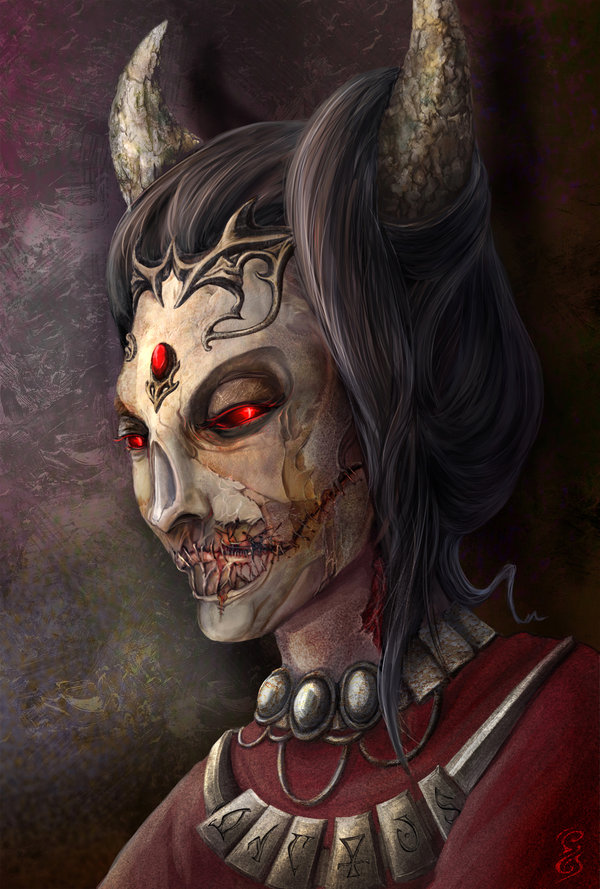 When I opened my eyes, I found myself staring at the canopy of my four-poster bed. I stretched, mouth agape in yawning, and sat up. In the dim light of the dawn, ribbons of sunlight cutting through the dust in the air, I rubbed my eyes with the backs of my hands. Perhaps this morning was a morning for fried pork bacon, hen’s eggs topped with shallots and a glass of white wine from the cellar. As I swung my legs over the side of the bed, my feet found something cold and wet on the floor. I blinked and peered blearily over the threshold of my downy mattress and patterned comforter. I was standing in a puddle of dark red wine. It left sticky splatters on the swept stone floor and a long streak making an uneasy trail to the doorway and into the hall beyond. It was likely one of my finer vintages, which only added to my frustration.

“Damn these useless servants. Didn’t even have the good grace to clean this,” I complained to myself.

I took my dressing gown from the hook beside my bed and hung it instead upon my shoulders. Tying the waist sash in a loose knot at my hip, I followed the trail of red, stumbling slightly in my feeble attempts to fend off the rigor of slumber. The trail led itself along the hallway and descended down the steps toward the main hall. As I followed suit, I became aware of an acrid smell—something akin to iron shavings. I rounded the corner into the dining hall, still in pursuit of the retainer responsible for this mess. The smell grew immeasurably stronger, and I stopped dead, feet now drenched in sticky wine. I screamed in horror and fell back, attempting to shield my eyes from what lay in the kitchen.

The red liquid was not wine.

Staring out at me from inside the kitchen were the faces of my wife and two children, looks of terror frozen on their faces. Elpida’s head was cocked at a grotesque angle, neck torn open violently, her lifeblood congealed in her wound. My young boys were flayed up to the chin, their skins hanging loosely from their glistening undeveloped musculature. Bruises had formed on their faces, and their mouths were swollen. Athos, my oldest, was missing his hands and feet. They were lined up neatly in front of his corpse, as if someone thought this to be art. My youngest, poor Ischyrus, was carved like a holiday fowl, entrails pulled out and piled in the space on the floor between his splayed legs.

“No, no, no, no…” I moaned in agony. I choked on my own voice, frantic sobs and confusion holding me against the wall opposite. I pushed off and shuffled forward on my knees, bracing on the doorway for support. For what felt like lifetimes, I knew not what to do, whether to go to my purloined family or whether to run to Kvatch for help. I reached out to my boys, cradling their heads in my arms.

I needed to get help.

As I got to my feet, I felt something in my hand. It was a dagger. And it was dripping in blood. Startled, I dropped it, and it stuck thrumming, point down in the veneered wooden floor. The memories flooded back to me.

I killed my wife. I killed my two children. I could see myself driving the dagger into Elpida’s neck, her screams muted by the flow of blood, turning from shrieks to pained gurgles to silence. I watched myself turn to see Athos and Ischyrus cowering in the corner as I descended upon them.

“I killed them,” I repeated.

I screamed again. As I turned to run, to run away from my shattered life and from what I had done, I came face-to-face with the monster who murdered my family. In the mirror, the man opposite me was smeared in blood. His hands were caked with it. I gazed at my reflection’s face and, to my alarm, he smiled at me.

I burst through the foyer and out into the courtyard to meet yet more death. The bodies of my servants were strewn about the courtyard helter-skelter, blank lifeless faces staring up into the sky. I had killed them all, too. I had stabbed, bludgeoned, choked, flayed, and skewered everyone closest to me.

Stumbling across the courtyard, every sight brought bile to my throat, and each ghastly visage was more terrifying than the last. I cried out not just for the lives that were lost, but because I knew I was responsible. I was the cause of all this carnage.

An even more frightening prospect filled my head. What would society do to me? Would I be imprisoned? Tortured as my family was? Put to the sword? Myriad outcomes crossed my mind, and I thought only of how I deserve each and every one of them.

I looked down at my feet. The dagger had followed me. It stood upright between the pale stones of my manicured walkway. I stared at it. I knew what I had to do. Justice, vengeance, penance—they would be mine. The man who killed my family would die by my hand, and I would be free of what I had done, reunited with my family in Aetherius. I bent low, knees and hands bloodstained and sore, and lifted the dagger from its resting place. With the knife in my right hand, my eyes flitted to my left. My wrist turned slowly to face me. My heartbeat grew in my ears, frantic and restless in anticipation. Before I could change my mind, I ran the blade of the dagger along the soft flesh, a trail of blood rising up to meet the knife’s edge. I switched hands and repeated on the right wrist, creating a symmetry of death. The knife clattered to the stone walkway and I fell to my knees, closing my eyes and awaiting the keen release of my mortal coil. Surely my family was waiting on the other side.

After several seconds I realized I felt no different. The pain on my wrists was gone. Breathing heavily, I lifted my hands. The cuts I had made were no longer there. Did I imagine cutting myself? I scooped up the dagger and tried again. Blood once more fell from my wounds. This time, I watched as the slices I had made faded away. I again took up the knife and slit my own throat, desperate to leave this horrid existence behind. At first I choked, and felt the blood spill down my chest. It too ceased of its own accord.

Again and again, I tried to end myself. Laughter rose from the corpses in the courtyard. Startled, I dropped the dagger and stepped backwards.

In unison the corpses of my servants rose to their feet, wounds still fresh, faces still blank. They marched in step towards the center of the yard and formed a singular being of death and terror. From the recesses of their shifting, fusing forms, an enormous snake spilled forth and coiled itself around their joining. A masked face peered out at me from the folds of flesh and blood and bone.

“Suicide is not an escape here, mortal.”

When I opened my eyes, I found myself staring at the canopy of my four-poster bed. My heart was racing and beads of sweat littered my forehead. Sitting upright, I searched the room for any remnants of my nightmare.

I fell back on my goosefeather pillow and wiped my brow with the back of my uninjured wrist. I was back in the world of the woken, and my family was not dead. I put my hand to the empty side of my bed and felt a shade of lingering heat where Elpida must have been only minutes before.

Chuckling to myself, I swung my legs over the side of the bed. My feet found something cold and wet on the floor.