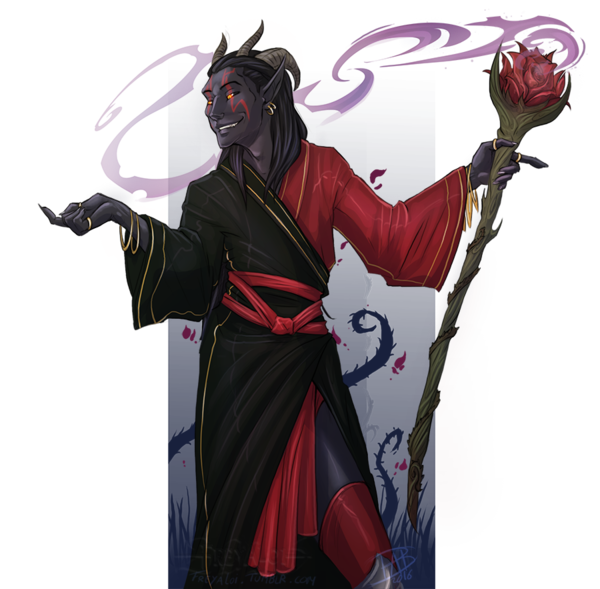 It was in the land of High Rock where Count Ancore Perystair found himself weary from endless stretches of boredom between stifled gatherings and dry visits. All he had desired for was an escape from the dreary higher-class monotony his fellow nobles had grown accustomed to and prayed for an answer in the dead of night.

Unbeknownst to Ancore, his wish was heard by the Sanguine, the Prince of Debauchery. Delighted, the Prince slapped his belly and gave a hearty laugh as he stepped into the mortal plane to answer this desperate cry.

And so, when twilight fell on the castle of Count Ancore, the casual party had shifted from hors d’oeuvres coupled with mead and wine to romping and general tomfoolery. Beneath the Count’s inebriated state, there was a twinge of uncertainty at the state of disarray his usually tidy chambers had fallen to.

But the event was far too lively for dismay! The women were beautiful, the drinks instantly sated thirst, and the food could have satisfied the most demanding of kings. Even the bards at play seemed to deeply enjoy the festivities.

It was at this moment that a stranger in a tailored suit appeared beside the Prince. His bright eyes twinkled beneath the hood as a crafty smile cracked upon his face.

“Ah, mortals!” He chortled. “How quickly they turn to beasts to escape the pains of being mundane.”

Sanguine recognized his brother, the Mad God Sheogorath. But he warmly welcomed the Prince of Madness with open arms and a smile that could swallowed mammoths whole.

“Come now, Sheogorath!” Sanguine boomed and offered him a goblet filled to the brim with wine. “Turn off the madness and join me in this merry tide!”

“Merry indeed!” The Mad God chirped as he took the goblet. “But I am too familiar with these posh sorts. They are too used to the grey. Too rigid. No good at all. They’ll lose interest in a few moments of time. Can you truly keep these people from losing the spirit of the party?”

Sanguine’s smile faltered, if ever so slightly. Then it resurfaced, “Of course I can! I am the Prince of Revelry! I can deliver enjoyments that only dreams could otherwise conjure!”

With an opulent snap of his fingers, the Prince summoned Daedra and mortal souls alike until the floor could not be seen. The walls became lined with barrels and treats, and luxurious beds sat where mortals did not stand.

Sanguine smiled at the growing throes of ecstasy witnessed within the chambers of the Breton’s castle. How these mortals suffered so long without excitement escaped him. What sort of life is it to live when one did not learn to indulge themselves?

“Live, love, learn!” He exclaimed, thrusting his hands in the air. “Deny yourselves no longer! Spoil yourselves and rejoice in the most luscious of libations!”

Count Ancore, however, was regaining his senses and felt a gnawing horror at the disaster his chamber had become. He had been stripped of his clothes, sweat seem to flood the floor beneath dancing bare feet, and his skin was sticky to the touch.

“Please!” He cried as he approached a group of patrons, “No more! We must get a hold of ourselves!” But the patrons laughed him off and pulled him into a frenzied dance.

For a moment, The Count had forgotten his worries as a Redguard maiden embraced him. But the Count, ever clumsy, bumped into a mead-filled Nord who in turn lost his footing and stumbled into one of the tables.

The Nord screamed with pain and anger as his flesh rippled and sprouted with fur. His screams escalated into a howl as his size grew and his teeth became a bearing snarl. His fellow companions, already entranced by the party, quickly slipped into their werewolf forms.

Count Ancore could barely mutter so much as a scream before the werewolves indulged themselves to the party. And among the screams and howls, Sheogorath remained silent and smiled as he casually moved his goblet in a circle.

“Merry indeed.” Sheogorath chortled, leaving Sanguine to what was remaining of the party.