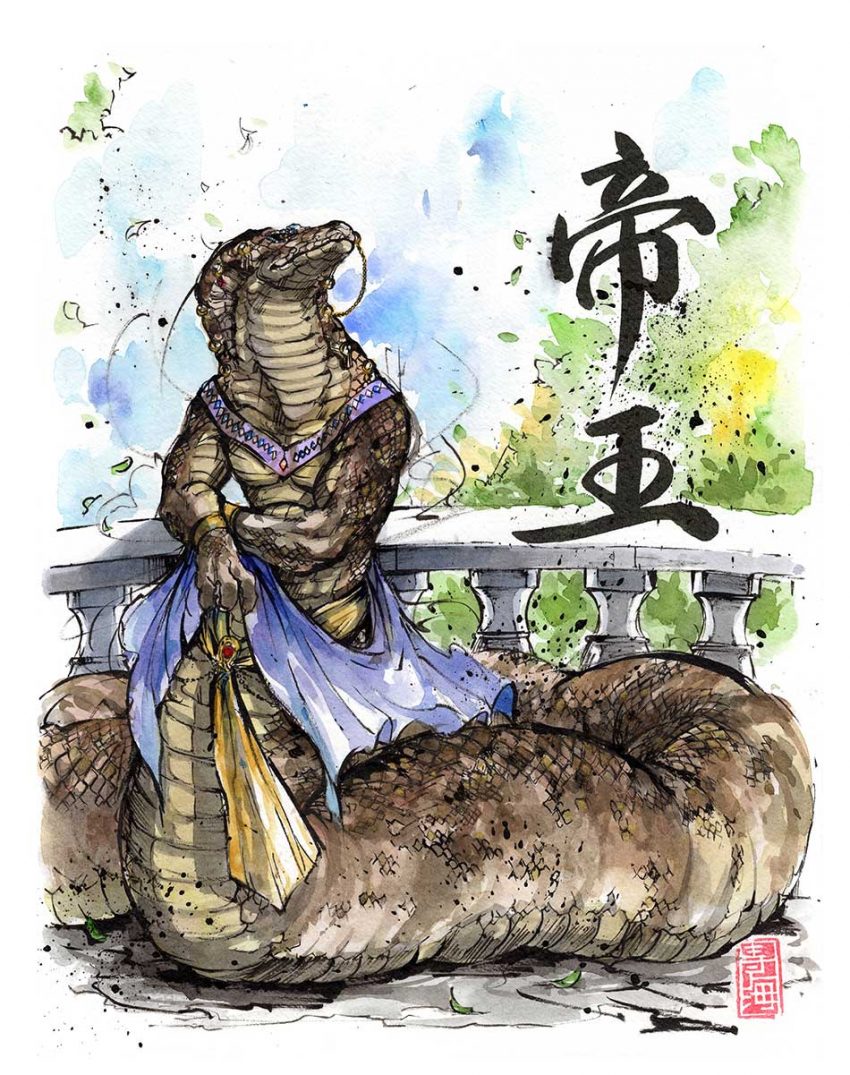 Well, there’s no time like the present, I guess. Hello, all. For those of you who may not know, I’m the self-professed “Akavir expert” among a little circle of deep-lore nerds, and I’m addressing a common misconception I find incredibly annoying.
I can already hear most of the people who’ve a clue what they’re talking about decreeing, ‘No one makes this mistake.’ However, I tell you now that you are wrong and need to leave your ivory Tower and speak to the commoners, mi’lord scholar. Now, on to the point.

Akavir is the mysterious continent to the east of Tamriel, and is known to have four races: the Snake-People (Tsaesci) of the Serpent Palace, the Tiger-Dragon Folk (Ka’Po-Tun) of the Tiger-Dragon Empire, the Snow Demons (Kamal) of the Snowy Hell, and the Monkey People (Tang Mo) of the Thousand Monkey Isles. Now then, from whence stems the concept of this ‘fifth, Akaviri race’? In short: it stems from misunderstanding and misinformation. In full: well, we are soon to delve into that. 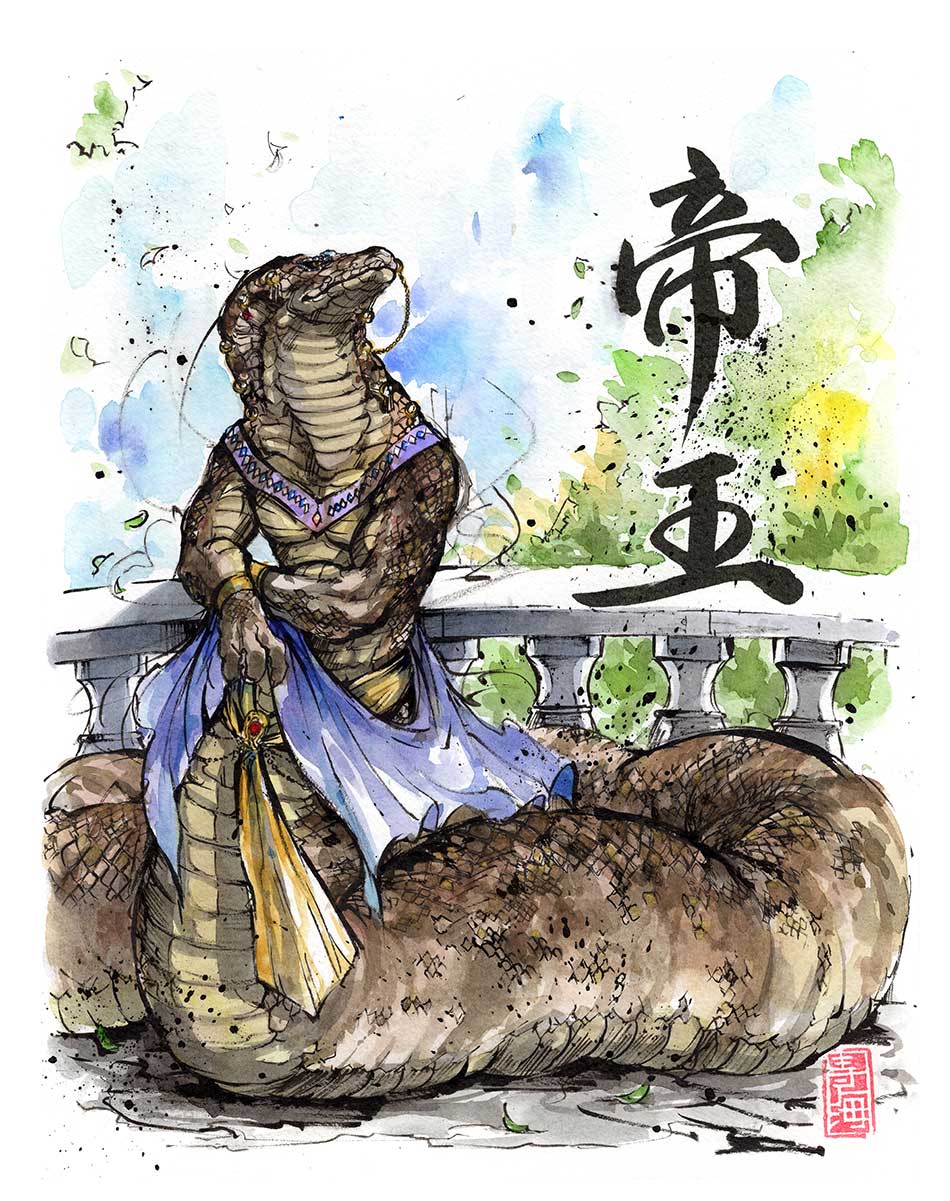 The most common and simplest-to-dismantle argument for the existence of a race called “Akaviri” is the misunderstanding that “Akaviri” could be compared to saying “European” or “African” or “Asian” in our world. It is a colloquialism for ‘a person from Akavir,’ and would be, in-game, comparable to the terms “Pyodonaen, Tamrielic, Thrassian, Atmoran, or Yokudan.” Now, while I hear the initial knee-jerk of “But Atmorans and Yokudans are races,” I assert that they are not. The Yokudans had at least two known races, Proto-Redguards and Left-Handed Elves, and Atmorans are arguably as numerous as 4 races, Karstaag, Proto-Nords, Falmer, and Dov, yet all of these are technically “Yokudan” or “Atmoran” respectively. Similarly, “Akaviri” is used for the four races of Akavir. Further argument can be made based on the mention of “Akaviri” arms, armor, and language; however, “Akaviri” armor is not a real thing, the language all stems from the Tsaesci, and the arms—post-Second Empire—are typically reproductions. As we learn from The History of the Fighters Guild, 1st Edition, quote:

“As has often been stated, the Akaviri, particularly the Tsaesci, understood weaponry better than armor. Even if they could not wear it themselves, the knight was able to explain to the other Syffim what the weaknesses were in their opponent’s armor,”

The takeaway point of the quote is that the Tsaesci cannot allegedly wear armor, yet we so often associate the Blades with the Tsaesci Dragonguard of the First Era. So how did they get the armor? In truth, there is only one time this question is even a valid one, with most examples actually falling to the knowledge that the Second Empire and the Syffim had non-Tsaesci who admired the style and sought to emulate it. The one, semi-solid example, is the ghost of Mixashi, the Tsaesci Commander of the fort at Pale Pass. Now, while we are here to discuss lore, we must also understand that this is a game series, and, at times, there are things that are done the easy way, rather than the proper way. The game engine of Oblivion, the two year deadline, and several other minor troubles with Bethesda Game Studios (BGS) led to Oblivion being, while memorable and beloved, quite a mess of unfinished points and half-finished plot-holes and points that anyone doing the research into these things will quickly notice. It is most likely that in a game engine where unique skeletons, animations, behaviors, traits, et cetera would take a handful of people many days, if not weeks or months, to make, and it was just easier to use a simple placeholder for something more commonly known and easily connected. Do understand, I only make this point here because BGS was about to go belly-up if they could not produce this game for Microsoft, there was too much at state for them to waste time on a single character model. In summary, the typical usage of “Akaviri” refers almost exclusively to the Tsaesci themselves and the only potential argument can be explained by understanding the out-of-game circumstances of BGS themselves.

Moving forward to another point I often see: the initial appearance of the “Akaviri” in stories of pirates who raided coastlines, kidnapping people and forcing them into slavery on Akavir. However, this is an impractical argument when one considers the sheer scope of what would have needed to happen to create a new race on Akavir. Thousands, if not tens or hundreds of thousands, would have needed to be captured and transported to create a basis for the interbreeding that would result in a new race. I know the “But our world” arguments are coming, but hear me out: we are talking about pirate bands, not an organized and systematic movement to loot the shores. Ergo, the odds of them taking whole villages of slaves seems rather low. How many Tamrielics could have fit on one boat, and survived the very long journey back to Akavir? If we are taking Report: Disaster at Inolith as a basis for the travel between Tamriel and Akavir, it could easily be understood to take several months, as it was necessary to take Cathoquey, Rosecrea, Esroniet, and Ynelesea to launch the invasion on Akavir. Specifically, it takes nearly two decades for Uriel V to launch his voyage to Akavir from Esroniet, however, this can be understood to his need to take each isle to secure a supply route, as that voyage itself is a mere six weeks. The need for such a supply route, however, proves the entire voyage from Tamriel to Akavir was too long to take all at once with an army of four legions of the Empire, the limit of the Third Era Imperial Navy at the height of its power. In summary, this argument loses to itself once we realize that we are crediting pirate bands with a greater naval ability than an entire Imperial Armada with regards to transferring people.

The final, most obscure and minor point I’ll address here is “Dundeen Dust-Breeches” or “Dundeen Half-Viri,” the half-Reguard/Yokudan half-”Akaviri” pirate of the Carriack and 500-or-There-Abouts-Who-Returned. Dundeen is noted to have a very cliché Asian design: hair up in a ponytail, painted eyes, golden-hued skin, serpentine eyes, narrow body features. However, this once again fails to prove the existence of an “Akaviri” race when we remember not only the existence of the Kingdom of Rimmen on Tamriel, but the natural appearance of the Tsaesci, and that Dundeen is called “Half-Viri” by Atmorans and Tamrielics. First, the Kingdom of Rimmen is the asylum-turned-kingdom of the Nibenese-Tsaesci nobles and their descendants following the rise of General Attribus in the Integrum of the Second Era. The General wanted to butcher all the foreign snakes who’d infested his homeland, and the Rimmenese commonly held more golden skin, hair, and eyes than the common Imperial. Second is the basic description of a Tsaesci: golden scales, serpentine narrow features, painted eyes, etc. Given that Dundeen is far from the only example of a potential hybrid of another race and what appears to be the Tsaesci, this would account for his appearance. And then, once again we find ourselves at my initial point: misunderstanding the usage of “Akaviri.” “Dundeen the Half-Viri” is known as such by people who are not from Akavir. It is a very simple descriptor that immediately eliminates most people called “Dundeen” from the mind, as Half-Akaviri people are rare by the late Second Era. If we want to chase the rabbit hole nice and deep, I might get into how the “Akaviri” pirates of the early Eras may have simply been this one man and his ships over the centuries as he is named as one of Ysgrammor’s Five Hundred, but I digress. In summary, this argument likewise does not hold up and defeats itself once one begins to consider who is calling Dundeen “Half-Viri,” and realizing he is not a unique example of a hybrid with the Tsaesci.

As a brief closing note, I’ll address some of the deeper concepts in another piece, such as the “Eating” of the Men of Akavir: this is simply a common misconception that plagues the lower end of the lore community, and it always greatly annoys me.