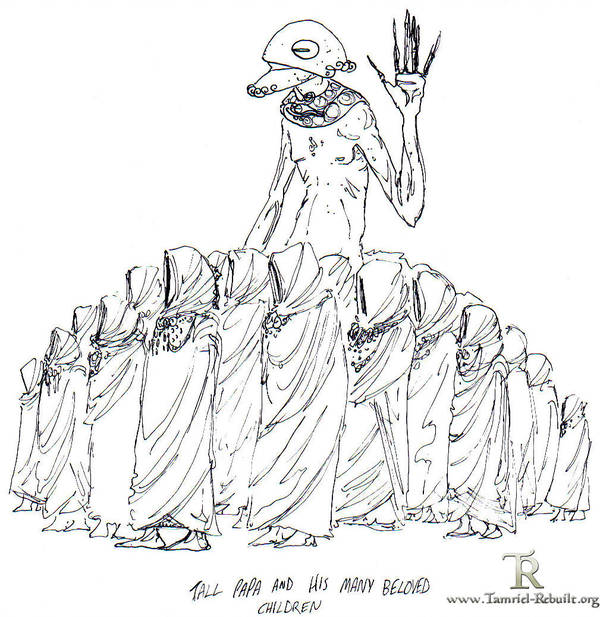 Some of the most radical theology coming out of Lhotunic circles today is the result of a paradoxical desire to conserve the subject, or Subject, of Crowndom. The theory of post-Satakaalism gives an illusion of undermining the subjective sovereignty of the Na-Totambu class as a cover for inserting this very class as a Subject of knowledge. By pretending the post-Satakaal subject has no class or regional determinations, the critique surreptitiously crowns, by virtue of the unspoken assumptions narrativized into the Crown law and ideology, a Na-Totambu subject. To illustrate this, let us briefly consider the recently published post-Satakaal conversation on questions of faith and empire.

Both participants, whose names I can leave the reader to assume, emphasize the central conceits of Iliac bay post-Satakaal theory: first, that the oppressive structures of power governing Redguard life are many-headed, and cannot be reduced to or personified as a single entity or instution, be it the adventurism of Cyrodiilic empires or our own ruling classes or even the more universal scapegoats of Thalmorine aggression; second, that Theorists must attempt to understand and translate the discourses of their Others. Yet both activist priests seem content to ignore the question of theological ideology itself, and the contingent fact that they themselves are implicated in the historical conditions and assumptions of the class/region whose narrative they nominally seek to subvert.

Despite these nominal concerns, their discourse is framed by two monolithic and anonymous subjects simultaneously considered to be in both binary opposition to one another and united by an attempt to resist or extricate themselves from oppressive networks of power and control: the Satakaal and the underclasses’ struggle. Invoking the Satakaal by name creates an appearance of specificity which proves ultimately unjustified, an appropriation of the older movement’s proper name by the most recent Iliac theological fad. The idea of the underclass struggle is no less problematic, repeating the typical post-Satakaal gesture of conflating all such struggles into a single, unified struggle and defining that struggle around a particular vision of an peasant/worker class specific to the issues and concerns of the urban centers along in the Iliac bay. In both of these gestures, areas (both ideological and geographic) of Hammerfall’s cultural periphery are rendered invisible, then essentially erased entirely.

In political and practical terms, these assumptions and erasures serve to center even this seemingly radical offshoot of Lhotunism around the preservation and perpetuation of its (male, northern/Iliacite, traditionally educated) practitioners’ economic and political dominance. This, however, was perhaps already obvious from the movement’s general ambivalence towards many large and small emancipatory struggles in the regions and communities not represented in their milieu. Of more obscure concern, but perhaps of even greater relevance, are the theological consequences that follow from investigating the failings of their critique.

In nearly all of the canonized intellectual traditions of Hammerfall (and, indeed, many places outside of it), one of the few constants amongst competing theories and narratives is the notion of a Lorkhanic/Seppic creation of the material world and mortal existence. Of course, external Imperialism from Cyrodiilic conquests has influenced Forebear thought to lionize this gesture, while the internal Imperialism of Yokuda’s ruling classes has influenced Crown thought to demonize it. That this element is both so present and so prevalent in many traditions seems to be taken as evidence that it is unquestionable true; yet my generation of intellectuals is honest in their intention to approach the growing problems of our world with a truly radical critique, must we not open to question even the most supposedly sure assumptions?

It is commonly held by theologians that even if we cannot take certain mythic ideas and depictions to be true in a literal sense, the shapes and images we choose to represent the figures of our faith are not chosen without reason. That is to say, even though Herma Mora has been empirically observed enough times for us to say rather definitively that Herma Mora is not a hare, that choice of depiction can nonetheless provide us with valuable information about HM. The same is true if we consider Tava/Kynareth to be (seen as) a bird and Lorkhan/Sep a serpent. Sep, notably, remains ophidian even in cultures which venerate him, as Tava remains avian even in cultures which associate her more with the sea, sailors, or various other aspects of her divine portofolio which do not meaningfully relate to the sky. Nor, for that matter, do cultures associate Kynareth with any flying beast but the bird; she is not a snow-whale to the Nords, nor ever any kind of dovahfly or insect. The conventional wisdom, then, that these images were chosen for the sinister connotation of the serpent and the fact that birds reside in the sky, are simply not supported by the evidence. Because we have so continuously failed to question the delivered wisdom of narrativized power structures, we have never stopped to consider other aspects of the bird that could explain the universality of this association, because these explanations come at the cost of calling into question the privileged narratives of patriarchal power which have long held unquestioning sway in the majority of Tamriel’s societies. Put simply, serpents are not known in nature to assemble nests by gathering detritus to house their offspring; that is, rather, the consistently observed behavior of birds.

Indeed, if we do not unquestionably accept as truth the narrative that Sep engineered and created the mortal world, we see more and more ways in which Tava’s traditional traits are better suited to that end. Sep is a serpent, in many versions at least half mad with hunger and in almost all traditions cursed with an undertone of fatalism and despair; these do not seem the traits of a methodical creator with a clear and intricate vision of the future. Tava is not only associated with a creature who makes nests, but also with a creature known for its escape from imprisonment to freedom; consider the recurring artistic motifs and metaphors of caged birds or clipped wings as representative of a person’s struggle to be free. Tava is also credited with leading our people from a ruined continent (not uncoincidentally, a ruined continent that had been ruled by an iron-fisted patriarchal power structure) to our salvation on Tamriel’s shores. Kynareth, in parallel, is associated with the rebellion of humans against dragons and their priesthood; with the Alessian slave rebellion against the Ayleid empire; and even in some tellings with the overthrow of Jagarn Tharn, Dagoth Ur, and Mankar Camoran by lending her son’s famed armor to the champions who defeated them.

Again, it is not a coincidence that Tava leads her faithful to salvation, time and time again, through the escape from or resistance to oppressors who are fundamentally autocratic and almost universally male. Each of these oppressors, in turn, claimed in their own ways to be the sole route to a kind of salvation or immortality: the solipsism-made-real of the Sharmat, for example, or Camoran’s vision of a Dagonite utopia made from the ashes of our world. Redguard faith, even in its most imperialized varieties, has never questioned the benevolence of its “Tall Papa,” its male authority who insists on the singularity of his path to salvation and responds with punishment (consider the rejection of Zeht) when it is questioned or defied.

If the story of creation is re-examined through these lenses – Tava leading a rebellion to free the other spirits from Ruptga’s tyranny, building a nest for the future from the cast-off skins of the past, and Sep as a courageous partisan who would rather die for the struggle than live in the oppressed role to which his creation by and as ancillary to Ruptga confined him (note the archetype of the Territorial Viper seen in many Tamrielic games of strategy and chance, typically used as a sacrifice to save its side from a powerful threat) – we see that the various ideological and theological divisions typically imposed upon us from above are in fact recodifications of a patriarchal, ruling-class ideology. That is, in staging the debate as which form that patriarchal ruling class will take (Mede or Thalmor, Forebear or Crown), the Theorists of that class inaugurate the assumption of the patriarchal ruling class even within ostensible critiques of a particular class of patriarchal rulers. It is only when we refRain from accepting unquestioningly these fundamental metaphysical assumptions (which, in many traditions, go even deeper, depicting a gendered interplay of “Anu” and “Padomay” where the Redguard tradition has the unified, unsexed Satakaal our philosophers are so fond of co-opting to give their claims the illusion of universality), we will forever be unable to extricate ourselves from the root causes of our exploitation and oppression even as we remove various specific and politically expedient oppressors.

[<< This; S/subject, curiously sewn together into a transparency by denegations, belongs to the exploiters’ side of the international division of labor . . . It is well known that Foucault locates epistemic violence, a complete overhaul of the episteme, in the redefinition of sanity at the end of the European eighteenth century. But what if that particular redefinition was only a part of the narrative of history in Europe as well as in the colonies? What if the two projects of epistemic overhaul worked as dislocated and unacknowledged parts of a vast two-handed engine? >>]

1. [<< I will quote the refRain that haunts our cultural memory: “We won’t give any more rice, for this rice, sown in blood, is our life”>>]