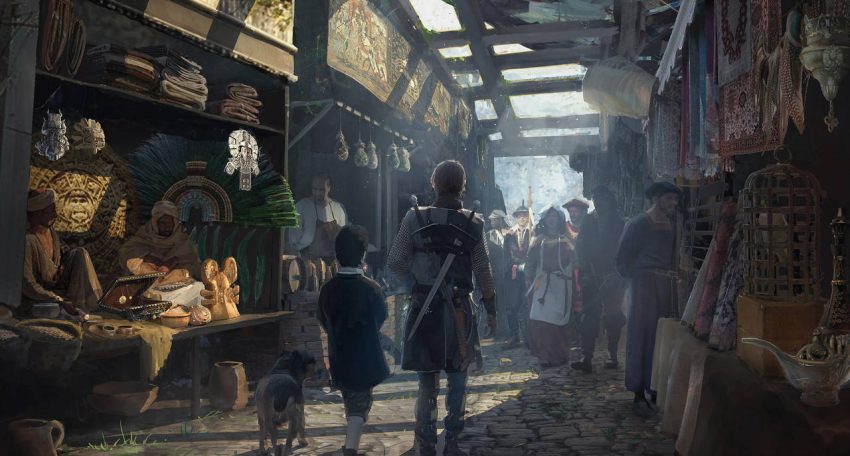 I had not been long in Markarth before I figured that collecting bounties on Forsworn would make for a lucrative trade. Equally fast, however, I figured out that taking on a camp of those savages by myself would be suicide. I had already spent the better half of a week searching fruitlessly for companions to aid in fighting the Forsworn, when my future employer walked in the door of the Silverblood inn.
The first thing that struck me was the way he carried himself – which I can best describe as ‘as if he owned the place, but didn’t care who knew it’. The next thing that struck me was his dark-tanned skin, he was, undoubtably, a Redguard.
Now, I’ve worked with a great share of men through my years as a hired sword. Protecting feeble old men or craven young men; fighting alongside skilled warriors with shit for armor, and warriors with fancy armor and shit for skills, but truly this warrior seemed to have it all. He wore his armor of chainmail and plate like another man would wear a bathrobe, and the blade which hung from his hip had the unostentatious look of a tool for killing. 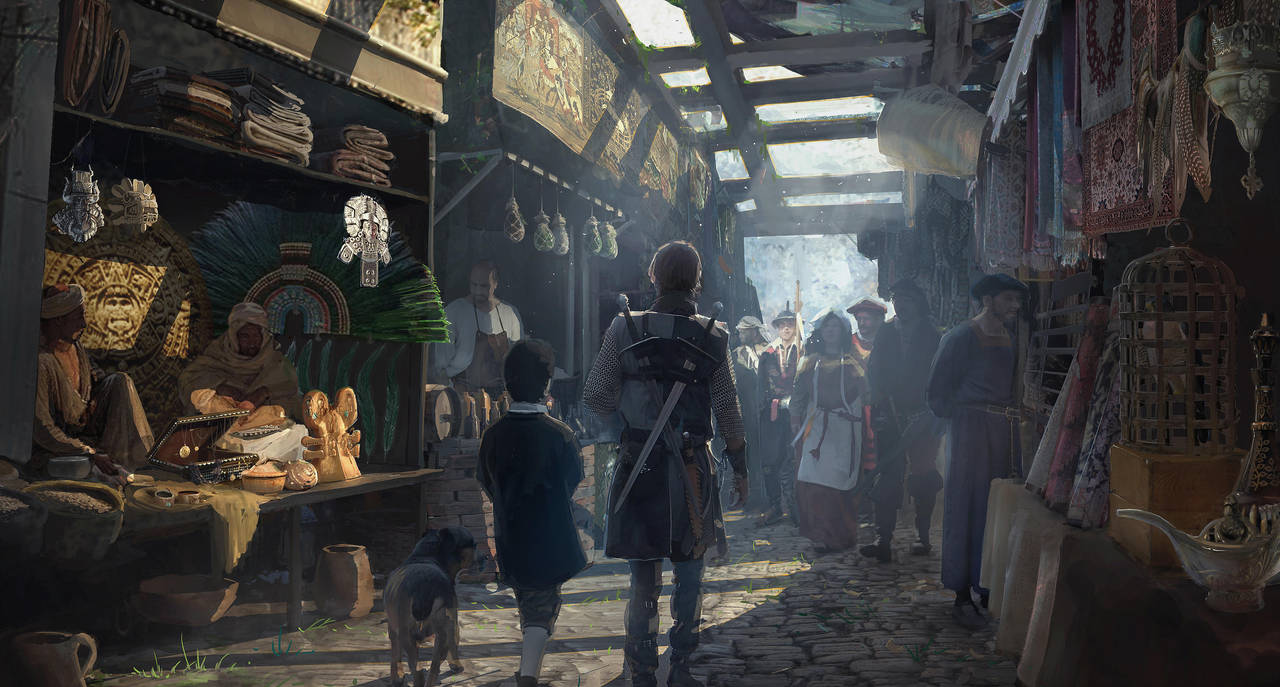 He spotted me from across the room and walked straight to me, sitting down beside me by the fire.
-“I’m going to take on a group of Forsworn Bruca’s Leap Redoubt, I need someone who can take orders and watch my back. You interested? Give you half the pay.”
Now, in my experience (and in my defense) playing hard to get had often helped the payouts in my jobs, so I went: “What makes you think I’m fore hire?”
-“You’re sitting in a tavern in a full suit of armor. You’re a mercenary, are you not?”
I’d love to say that I retained my cool, and handled the situation professionally – but this is a journal, so what is the point of lying? The look of his eyes made me feel like a fool for ever trying such a cheap trick, and for believing he would ever fall for it.
Long story short; I took the contract. Normally I would never try to pull off a two-man attack on a bounty like this, but this man, whose name I learned was Artor, had an air about him – and air that seemed to imply he only hired me to have someone help carry the loot.

An eventful day. Truly. I’ve honestly never been very philosophical; I only write this journal because I hope to grow too old to fight one day, and I might make a bit of extra coin on publishing my memoirs. But to the matter at hand…

We had travelled a day’s time crags and valleys of the Reach, speaking little. I asked him once why he was in Skyrim, and his only answer was that he was ‘hoping to do some good,’ but otherwise remainined silent – Fine by me, I’ve had too many employers obsessed with chattering.

On the morning of the third day, having camped in a cave the previous night, we soon saw the signs of Forsworn. I had heard the people of Markarth call them ‘savages’, but never expected this. The average bandit clan is savage, but the Forsworn are feral. The road was lined with chopped up animal parts, bloody spikes, strange totems, and what appeared to be the remains of spriggans. I half expected to hear animal screaming.
And in another moment, we heard animal screaming as the Forsworn descended upon us.

They came charging at us, clad in animal furs and filthier things, screaming at us as they streamed onto the road, I should think there was nearly a dozen of those barbarians. My employer and I drew our swords.
The flash of steel made them slow down a bit, and instead of running they began edging outwards, expanding in a circle, surrounding us. It was then they thought to taunt my employer. In hindsight, this somewhat backfired…
-“You’ll die today, Nord!”
“I’m a Redguard, you fool.”
“You think that means you’ll get out of this alive?” another snapped.
-“It means you won’t.”
And they did not like that one bit. They all had the same idea, at the same time, which was to forget about formation and dive at us headlong. The ensuing fight was a flurry of steel, bone, and blood which is too intricate to adequately put to parchment. Suffice to say, we won. And that bastard Redguard didn’t even seem to break a sweat. Truth be told, and it’s a truth I would never admit to any but this journal, he would’ve managed without my help I think. The crazy bastard was smiling with every parry, feint, and cut.
But as long as he’s my employer, I’d rather have a skilled madman than a mellow dead one.
After the first party had been dispatched, it was easy knife work to search through their camp and cut down any stragglers, and we were soon headed home a few trinkets richer, and much bloodier. 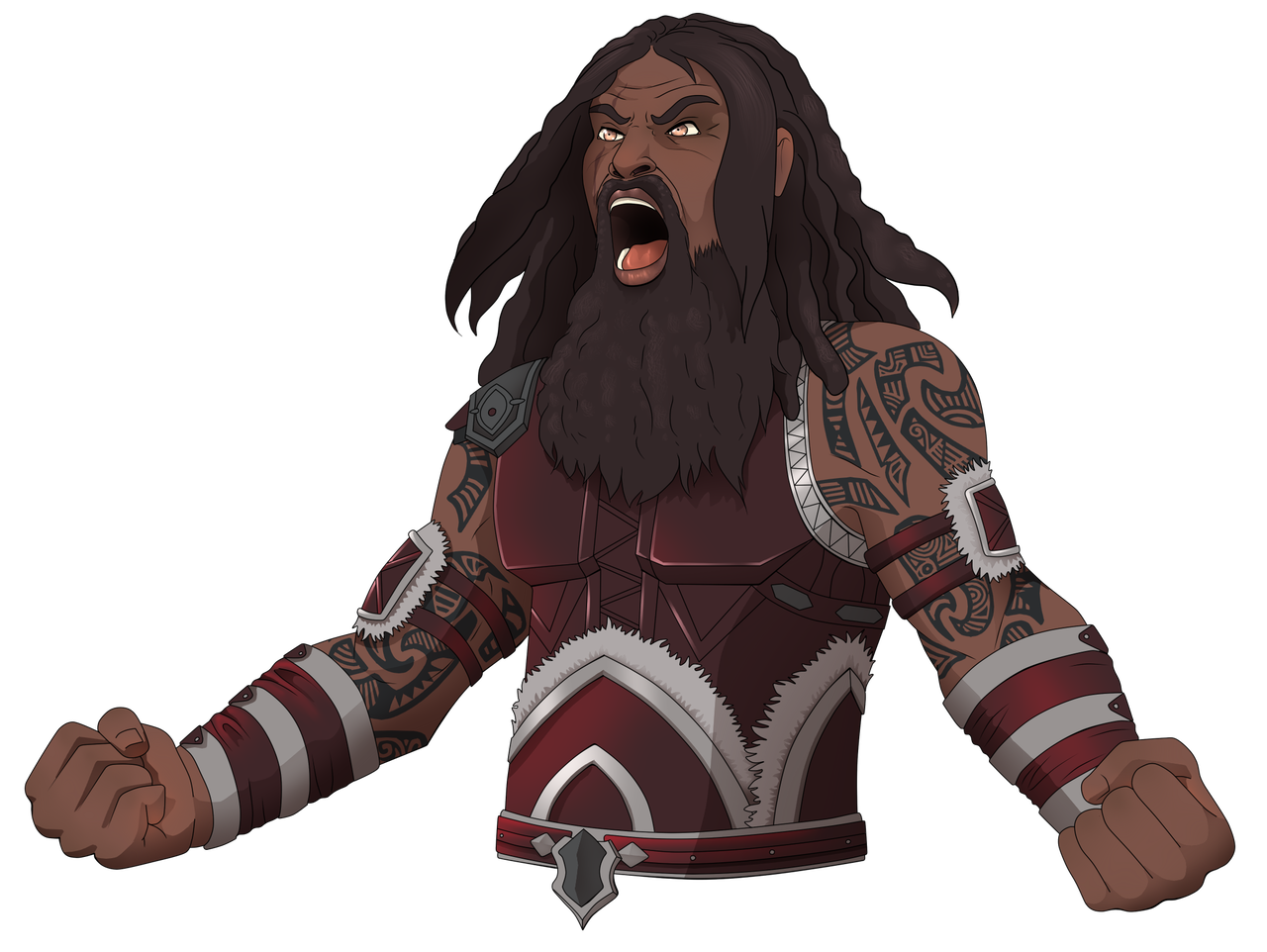 On the way home we walked a different road. Following the Karth river in relative peace – until we came upon body hanging from a tree outside a little farmhouse. I’ve seen many a wartorn county in my time, so I made to move on, but my employer remained standing, staring at the hanged man.
-“Who do you think did it?” I asked, perhaps too casually.
“Stormcloaks. Drunk legionaires. Bandits. No way to tell. Doesn’t matter either.’ Without another word he dropped his backpack, crawled into the tree, and cut the rope holding the man, his body flopping heavily to the ground. At first I thought he was going to check the man’s pockets, but he simply jumped down from the tree, turned to me and asked me go look for a shovel in the house’s toolshed while he checked the rooms inside.
A little baffled; I went in the toolshed – which was mostly broken bits of wood and scrap iron, but I found a shovel, and returned back outside to my employer. “There are two women inside; one young, one old, both death. Help me carry them out.” “Why? Leave the door open and a pack of wolves will be along even-“
The look he sent me barred any objection, and so I resolved to the way of the mercenary… doing whatever in Oblivion’s name your employer wants you to.

After we had carried the two women, one appeared to be in her forties, the other much younger, he dug the first of the graves, the one fit for the hanged man, and then extended the shovel towards me. I lifted an eyebrow: “You’re the one who wants to bury them.”
-“Remember when I said I needed some one who could take orders, and promised half the pay?”
And so we took turns digging.

When we had dug the graves, our breaths were greedy and gulping, but we were otherwise silent. A look like a thundercloud had passed over my employer’s face so, drawing on many years of mercenary experience, I kept my mouth shut.
It was a while before he finally spoke: “this is the gist of it really.”
Too curious to shut up, I couldn’t help but ask: “the gist of what?”
He waved his hand in general: “this war. For all their clamor about losing their rights, it’s not the Stormcloaks that truly suffer, and not the Imperials neither or the lawless bandits who get away with anything. It’s people like these. People who wanted nothing but peace to live their own little life, but had it cut short because some idiot somewhere had a grand idea.”
Feeling uncomfortable with this sudden outburst, I retreated to a tried-and-true comment: “Death comes for us all in the end.”
At this he sent me a look that might well have killed me, if I had faced it.
-“You elves live, what, three-four hundred years? How’d you like that cut down to forty? Because you were gonna die any way?”
“I wouldn’t like that,” I confessed; somewhat vexed that my cliché had failed, for it had usually always set people into solemn silences in situations like these. But my employer seemed insistant on sharing his solemnity.
“If life is worth living, then every day of it is a treasure – and no one had the right to take that away from these people.”
“Awefully philosophical, for a man who smiles when he’s killing Forsworn,” I remarked.
“They made their choice. They took up arms for a cause, and started killing for it. If you take up arms against someone, they have a right to fight back – and I enjoy fighting back. They had it coming. Same thing goes for the legionaires and the Stormcloaks whose blood now wets this land. They might not fully realize what they’re getting into, but it was their choice to make.”
“Legionaires are drafted, you know? It’s not always their own decision.”
“We always have a choice,” he snapped. “They could desert if they wished.”
“The Legion doesn’t take kindly to that. Deserters are marked for death.”
“No more than regular soldiers,” he said solemnly, his voice and his gaze drifting into the distance. It was only then we noticed how low the sun had set in the sky, and in solemn silence we rode back to Markarth, to claim our reward for a hard day’s work.