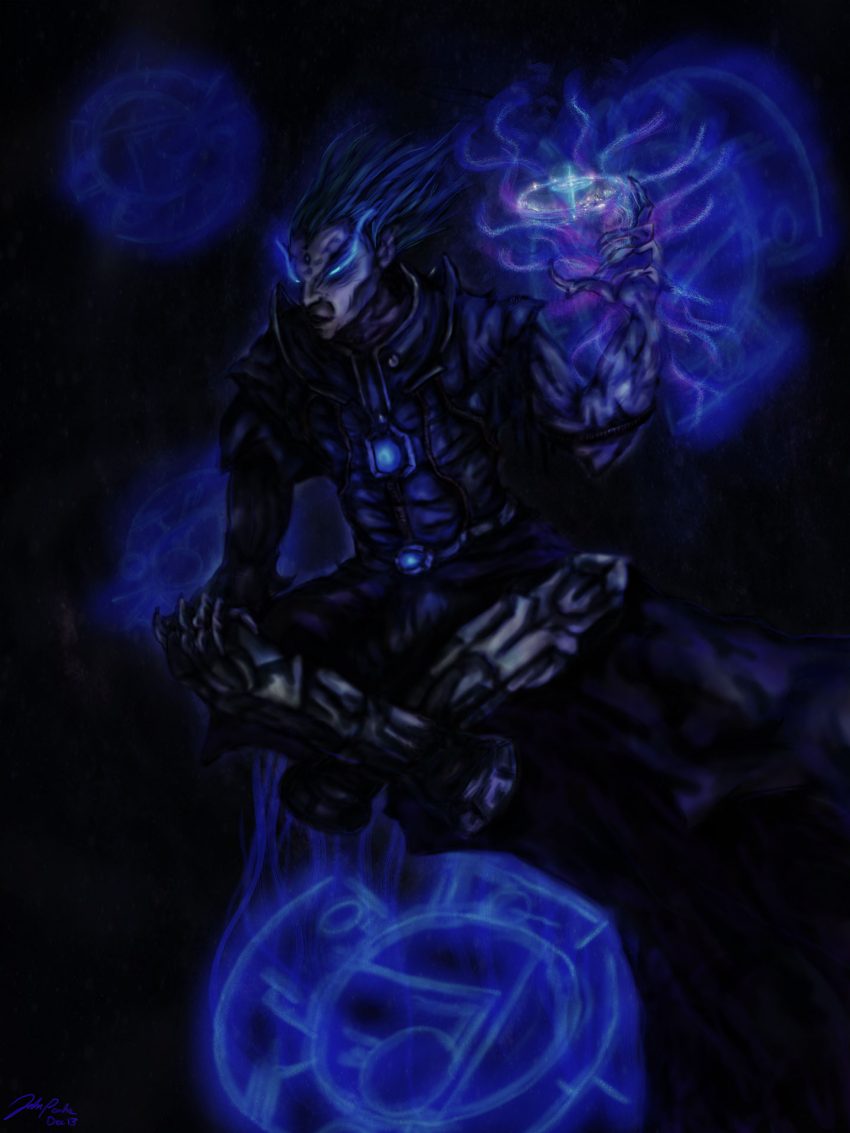 Upon noticing the anti-Magic fervour that has engulfed Skyrim, and indeed much of Tamriel as of late, I have taken it upon myself to explain to those uneducated in its intricacies the theory and essential knowledge of Magic in order to dissuade the somewhat irrational fears directed at my own workplace and other Magical institutions. This work will cover the basic information about each of the various schools of Magic, as well as the various processes by which it is cast.

To begin explaining the fundamentals of Magic, one must first define exactly what Magic is. In its most basic form, Magic is simply the manipulation of energy in order to produce an effect. Typically, this is performed using Magicka, the divine-star energy absorbed by all living things that leaks through the holes in Mundus’ barrier. Some schools of Magic, such as Enchanting and a number of Tonal Magics instead employ Animus in order to achieve their results, the energy of the soul. From what little we know of the Magics of the long-lost Dwemer, they harnessed the geothermal energy of the magmatic lakes hidden beneath their strongholds to power vast machines that in turn altered the world the same way that the other methods of Magic casting do.

How Does Magic Work?

The various forms of casting Magic work in slightly different ways, as based on their differing sources of energy. Magicka-based Magic, henceforth referred to as Classical Magic, relies on the formation of so-called ‘spell circles’, or more accurately, Runic Matrices, to perform the calculations required to cause the desired effect. These ‘circles’ can be formed either physically, drawn onto objects, mentally, viewed in the so-called ‘mind’s eye’ or manifested as a glowing, ephemeral image. Once the calculations are complete and recorded on the Matrix, the appropriate amount of Magicka is channelled into the circle and the effect is produced. The desired effect is often substituted by Daedric Runes as a sort of ‘shorthand’. Spell Scrolls use the same process, however the Circles inscribed upon them are permanent, and thus less adjustable for the user.

Enchanting works similarly to Classical Magic, but with a few key differences that require their own section in order to explain.

The Animus Magics are more instinctual, less calculated than the Classical Magics more commonly used. Rather than form the complex, albeit reliable, Matrices required for the use of Classical Magics, the practitioners of Animus Magic instead draw out the energy of their own soul, and ‘burn’ it to produce the desired effect. Practitioners of the Nordic Thu’um use their Animus to produce a specific sound or ‘Tone’ that briefly changes the world, while the Redguard Ansei or ‘Sword-Singers’ create weapons out of their Animus, that are in turn swung in such a way that their ‘whistle’ creates a Tone.

Too little is known of Dwemer Magic to include here, although speculation about their practices, and some of the more common theories will be included in a later section.

Why Is Magic Organised the Way It Is?

Strictly speaking, the various ‘Schools’ of Magic, those being Alteration, Conjuration, Destruction, Illusion and Restoration, as well as the so-called ‘lost’ School of Mysticism are purely arbitrary, although they do serve an important purpose. Simply, the organisation of Magic into ‘Schools’ enables them to be taught more easily, as the categorisation allows students to recognise the common elements across spells far faster than if left as an unorganised mess. Destruction Magic all deals with forces that exist in nature. Conjuration is the calling of souls and entities to the user’s side. Mysticism, while it was still a School, was an exception to this rule, as it was made up of a rather eclectic mix of spells, simply because they would not fit into the other Schools neatly. However, since the Schools dissolution, the spells it contains have been recategorized, and the definitions of the Schools reworked in order to suit their contents better. Interestingly, there is still some debate as to where teleportation spells should be categorised. Some, like myself, believe them to be Alterations spells, manipulating the world, while other see them as Conjuration spells, as the entire school does mostly focus on the opening of portals.

This book will discuss all the Schools of Classical Magic in detail in the following sections, explain both their functions and how to recognise them.

This article is part of a series. To see the other sections, please use the links below.
Chapter 1: Destruction
Chapter 2: Conjuration
Chapter 3: Illusion