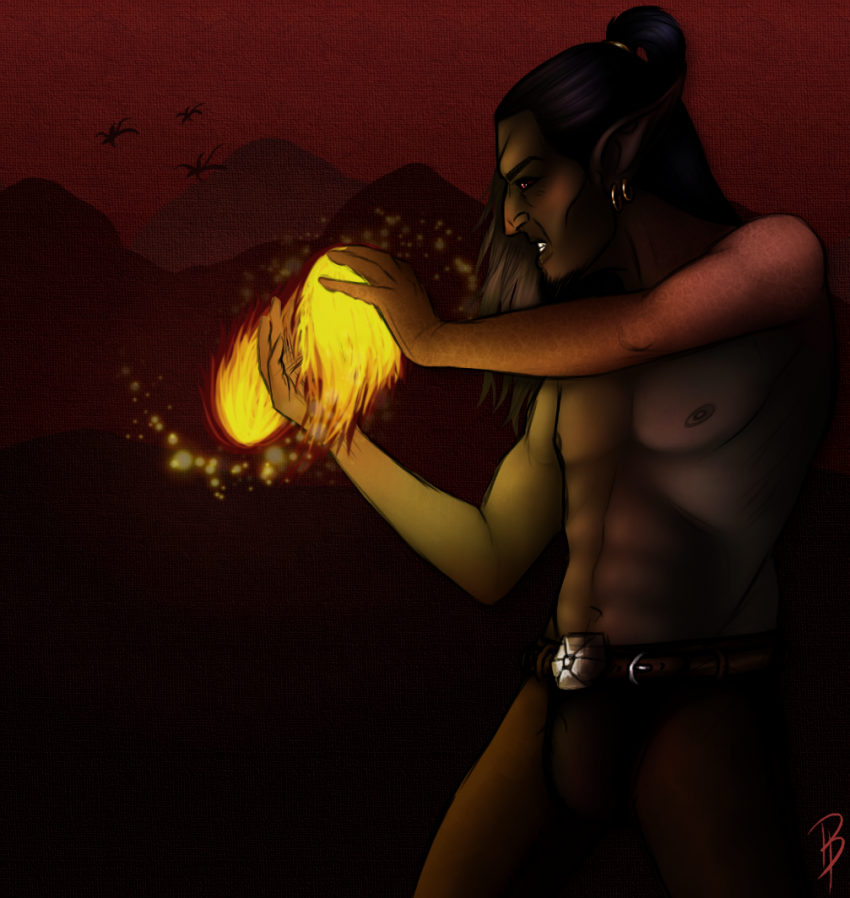 Chapter One: On Destruction

Destruction Magic, aside from Restoration, is one of the most commonly practiced schools of Magic, as well as one of the most positively viewed, despite its nigh-inherent nature as a tool of war and creator of suffering.

Destruction Magic is defined by the College of Winterhold as the use of Magicka to manipulate natural forces. Under this definition, the name is a bit of a misnomer, although most uses for these forces are as weapons.

Almost all Destruction Magic features one of four delivery methods – Concentration spells, which require constant casting and application of Magicka; ‘Fire and Forget’ spells, which deliver the force as a projectile; ‘Cloak’ Spells, that surround the caster in an aura; and ‘Touch’ spells, which activate when the caster comes into physical contact with something.

This section will be divided into four categories, each discussing a force used in Destruction Magic, as well as both harmful and non-harmful applications.

The most common form of Destruction Magic is the manipulation of Heat in the form of Flames. Typically, this form requires very little Magicka, as the calculations are fairly simple and not much energy is required to produce the effect. In order to harness Flame spells, the caster uses Magicka to collect flammable gasses within the atmosphere and vibrate them until the heat from the friction is enough to cause ignition. From there, the spell is fired off, usually as a projectile. Flame Magic is denoted in Runic Matrices by the Daedric rune Hefhed (F).

The most common application of Flame spells is as weapons, with Battlemages often being masters of this particular type of Magic. This is both due to its low Magicka cost and its ability to ignite flammable materials, such as thatched roofs or timber houses, causing further damage. However, this is not the sole use of Flame Magic. Unlike other forms of Destruction Magic, Flame Magic is incredibly useful as a utility, allowing the user to light campfires without the need for tinder while travelling, provide a source of light when torches or candles are unavailable, and provide warmth on the coldest of nights.

The inverse of Flame Magic is Frost. Rather than collect flammable gasses and igniting them, Frost Magic instead gathers the moisture in the atmosphere and slows its movement, robbing it of its temperature. As with Flame spells, Frost spells are usually fired as a projectile, although some Frost Concentration are highly effective outside of combat. Frost Magic is denoted in Runic Matrices with the Daedric Rune Seht (S).

The most common application of Frost spells is as weapons, much like Flame, with the spells not only injuring the target through bruises and broken bones from the solid projectiles, but also sapping them of their body heat, weakening and tiring them. Frost Magic can also be used outside of battle, however, with Concentration spells producing vast quantities of ice that can be formed into rudimentary structures, often used as temporary windbreaks or sea walls to prevent flooding.

Shock Magic is the rarest form of Destruction Magic, being the hardest to master, and requiring the most Magicka to perform. Shock spells can be generated in two ways. ‘Static’ Shock spells use the friction in the air to produce a surge of electricity, while ‘Pure’ Shock spells either collect pre-existing electricity and expel it or directly convert Magicka into electricity. While usually fired as a projectile, due to the fact that the collection of electrical energy, the most common method of producing Shock spells, is a difficult and long process, and only so much can be gathered, Shock-based Concentration spells can be used to great effect, although can almost only be performed by conversion. Shock spells are denoted in Runic Matrices with the Daedric Rune Lyr (L).

Unlike other forms of Destruction magic, Shock spells have a strange set of uses outside of combat. While they do produce heat, they are unsuitable for lighting things or producing warmth, being both too hot and too short in duration, and they cannot be used to build structures. Instead, Shock spells are useful in the medical field. Appropriately sized electrical shocks can be used to restart the stalled hearts of those suffering from cardiac arrest, and small shocks can be used as a diagnostic tool for sensitivity and nerve damage.

Part IV: Other Forms of Destruction

The other forms of Destruction Magic are somewhat more eclectic than the more common ones. Some mages manipulate the earth to produce rock projectiles or structures of stone. Others utilise water as a cutting force or to manipulate the weather and cause rain for agriculture.

The most dangerous forms of Destruction Magic are those that manipulate life forces. Little more than perversions of Restoration Magic, the Curse spells that sap the strength of the target, and the Haemomancy wielded by Vampires are incredibly dangerous, with very little use outside of the battlefield. However, there are some recorded cases of these types of spells being used in the medical field, although these reports are dubious at best.

This article is part of a series. To see the other sections, please use the links below.
Introduction
Chapter 2: Conjuration
Chapter 3: Illusion