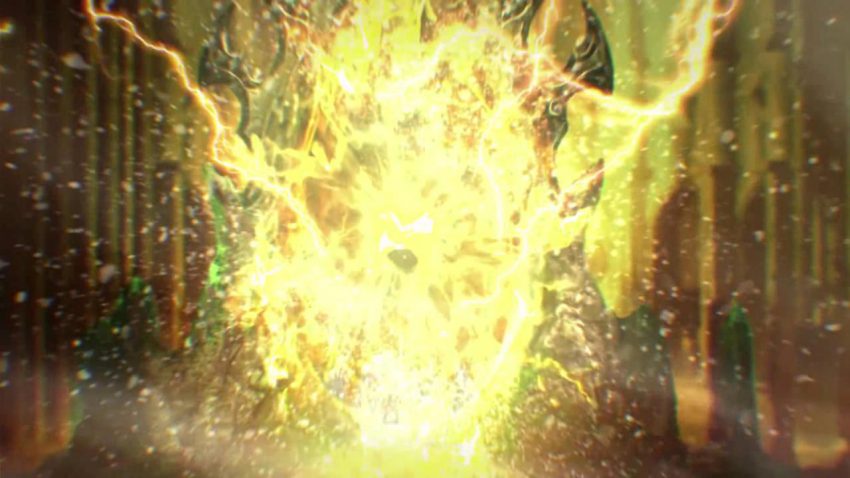 As has been noted before, here and elsewhere, this community is blessed with some of the most enigmatic, intellectually-complex meta possible for any fandom. We have literal decades of intense religious and philosophical study, debate and feverish cross-referencing, with more and more Metaphysica being examined and reexamined every day. So much intellectual progress into the deepest workings of the Aurbis has required the carving-out of whole new lexicons, almost a dialect unto itself, practically unknowable without heavy study. Bickering forums and boisterous groupchats ring with new opinions and old, informed by works not out of place in any university library. The lore community, like any other organisation of academics, tends towards a one-eyed hyperfocus on what is loftiest, what is most abstract and hidden; the drive to penetrate what is, finally, the most impenetrable. It is, fundamentally, a reflection of what many of us have known when it comes to modern learning: the college, high academia, the native environment of the scholar and the scribe. A tower of information, rising high above the base and the lesser, gleaming like milk.

It is impressive, what we have built. It is ambitious. It is even noble, in its own way.

Don’t misunderstand me; I admire this monument to dedication that is deep lore academia. The findings are not what is up for debate, nor the tendency to mistake opacity for eloquence. I will not even argue too much on the elitism that festers under the skin of our workings– our, for I do not forget to include myself in all my criticisms here– which derides accessibility as unnecessary and weaves Teflon-coated jargon into our conversations to weed out the uninitiated.

(All of these, in fact, are the type of fault common to almost all academic circles. It is a frequent enough sin that, ironically, there are whole academic circles dedicated to its study.)

The problem is, so much time and energy has been spent on these highest-and-deepest points of lore, that the world that surrounds it has often fallen by the wayside. The natural consequence of hyperfocus on the academic is the neglect of the bread-and-potatoes baseness of everyday existence, the taxes and laundry soap and ditch-digging that keeps the world moving along. That might sound fine enough, for those who simply wish to study the deep-meta, those who reach only for that stardust and nothing more. Why, they reasonably argue, would anyone bother with the boring, everyday-world things in their studious dedication to escapism? Who would care about the dirt and dogshit of mundanity when there’s so much glory to explore? Where is the magic, gods damn it?

Well… All through it. Everywhere.

The everyday-world stuff is the foundation holding up the towering spire of our own abstracted, bickering essays and interminably spiralling Reddit threads, the clay and stone giving meaning to the architecture. Who wouldn’t care for such things? Is that not what we’re here for? Is that not what drew us in the first place, what brought us together in love to cherish and explore this world we adore? This, the meat of mortal experience, this is what builds a world. This run-of-the-mill grime gives weight and substance, necessary to bring meaning to the gossamer and ether. Without it, to what purpose do we bend our worship, our scholarly rigor?

What is the purpose of chewing all the reverence from our mysteries over and over, in leaving aside endless fields of unexplored possibility in favor of studying the divine to death?

Moreover, that neglected mundanity is the grounding bridge between the real world and the highest metaphysica, the way that many make their dives into lore study. Think carefully on that: the avenue by which beginners grow into old masters is actively viewed as lesser, unworthy, unimportant by the least-desirable corners of the Elder Scrolls fandom. This is, those scoffing beacons of self-importance insist, the difference between Their Brilliant Apocrypha and Mere Fanfiction, as though any of it made the slightest difference.

Everyone remembers the kings and conquerors, the grand mages and the legendary warriors, the high priests and determined plane-walkers whose fictional pens laid the foundations for our gleaming spires of essay and assertion. But none of it would matter, were it not for the thousands of unnoticed stories woven into every step of the Grand Heroic journeys: the stable boy who tended the mounts, the servant who refilled the Archmage’s inkwells, the farmer who first coaxed grain from the thirsting fields of Rorikstead, the hunter’s dog who tracked down the King’s venison.

This is what that grand tent pole of the Aurbis shelters: a countless swarm of normal, mortal lives, unimportant and essential, just getting by as best they can, each the star of their own tiny epic. Without them, the tent pole holds up nothing, becomes a dry stick in a desert, and the ivory of our walls loses its luster. Without them, this beautiful, intricate world may as well be a matte backdrop painted on a wall, all our great discourse nothing but a numbing drone.

This world is alive. You can’t live on ambrosia, and there’s flesh on this world’s bones still begging to be torn free and savored. Bite into the meat, taste its salt and let its gore nourish you. Dig your fingers into the dirt and tell me what secrets you find there, far from the stars. Show me how the rains fall on Craglorn heath, show me what Niben crawfish smell like as they sizzle in the pan, show me which flower makes the best dye and which breed of goat flourishes in the swamps of southern Cyrodiil. Show me how the sunlight falls through the cloth of an Alik’r tent, show me how the dust rises from the flanks of a bear as it scratches against the remains of an Oblivion gate, show me how the Dunmeri firedancer feels as magicka winds through their veins like hot wire. Show me all the innumerable secrets you find, hidden and vital in the undergrowth you thought yourself too good to search. Show me life, in all its muddy little details.

Trace the path of a soul from man, to beetle, to man again, to the food of Daedra, to the last song of a dying star. See how the contrast of mundanity makes the glory of the high and holy so much brighter, how the grime and patina burnishes dimension into the gold that would otherwise lie flat and dull.

Show me a world worthy of so much devotion. Let me see it through your eyes, your words, your hands. Then stand back atop the tower once more, if you desire, and see how much more beautiful the view is now.