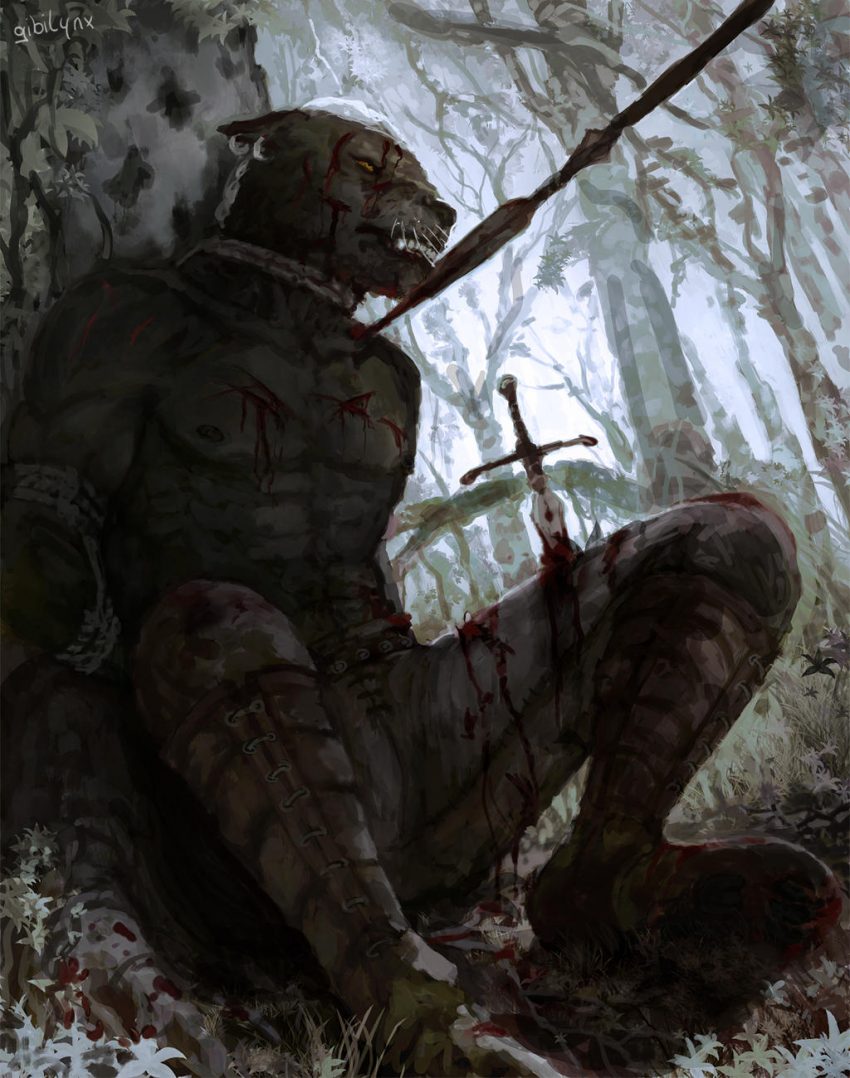 It took three days for Ma’Kir to get to the Elsweyr-Valenwood border. Anyone else might have booked passage from Senchal to Torval by sea, and then traveled the short distance to the border from there, but Ma’Kir didn’t like the open water. It made his fur stand up at funny angles. The three days it took to travel by road was longer than he had hoped the journey would take. The corpses he had purchased with the Sload’s money had been placed in Jo’Tha’s care. Fortunately the oils and ointments used to anoint corpses in preparation for the flame served as a mild preservative, keeping the bodies free of rot for the time being. Twenty corpses down, eighty-some more to go.

He found his way to Torval en route, and hired a group of sellswords and farmhands, both for protection and for the gruelling physical task that lay ahead. Ma’Kir made sure to purchase from the temple in Torval a hefty supply of preserving ointments so as to maintain the freshness of the corpses for as long as possible. It didn’t come cheap. On top of all that, he decided having a team of drawn carriages would be necessary to transport such a load from the slopes of the Xylo River back to Senchal. When all was said and done, Ma’Kir had run through almost three-quarters of the Sload’s gold.

The timing would have to be right. The corpses they collect would have to be as fresh as possible to meet the Sload’s specifications, even after applying the oils. Fortunately Jo’Tha was able to arrange for proper storage of the other twenty. Ma’Kir arrived at the conclusion that the only way to find fresh corpses was to patrol the border and hope to encounter an attack on one side or the other, all the while staying far enough away from the Elsweyr encampments, or kega, to keep from arousing suspicion. Alternatively, they could dive into enemy territory and attack a Bosmer encampment, provided one could be found. For all Ma’Kir knew, the Bosmer could maintain their camps in the trees along the river, hidden from view by the canopy of foliage. It would be the smartest idea for them, thought Ma’Kir, but alas Ma’kir’s formal learnings of the Bosmer were shallow at best.

The only other option, should neither of those plans work, was to ambush a detached Khajiiti kega, and hope the bodies produced were numerous enough. Of course, Ma’Kir realized that his company of fifteen or so would be largely outnumbered, should there be enough soldiers to satisfy the Sload’s requisite quantity. It’s the simple ironies, Ma’Kir mused to himself.
Fortunately, such desperate measures proved unnecessary. Several hours of walking northward near the banks of the Xylo found a recently watered battleground. Several combatants were still in arms, hacking and shooting at each other nearer the banks of the river. The ground was littered with the dead. The bodies of Khajiit had mostly been turned into pincushions by Bosmeri arrows. Their owners weren’t terribly far away, suffering long claw marks and opened bellies.

“Quick, the chance is now!” Ma’Kir hissed to his companions. He and a dozen others waded into the bloodstained earth, fanning out to inspect the remains of the fallen.

Ma’Kir wrinkled his snout at the smell. It hadn’t been this horrid back at the Senchal crematorium. Each body he glimpsed was more misshapen than the last. Some had arrow shafts in their eyes and underbellies, others had limbs entirely missing or entrails strewn upon the coarse dirt. Ma’Kir grabbed one that he thought looked well enough intact. He hoisted the Suthay-raht by the still-warm armpits and dragged him toward the carts. Looking up briefly, Ma’Kir was delighted that most of the others had found suitable corpses, as well, and were following Ma’Kir’s lead.

Ma’Kir strained under the weight of the cadaver and plopped him with a thud on the unfinished wood of the nearest cart. It coughed. Ma’Kir nearly jumped three feet in the air and stepped back. 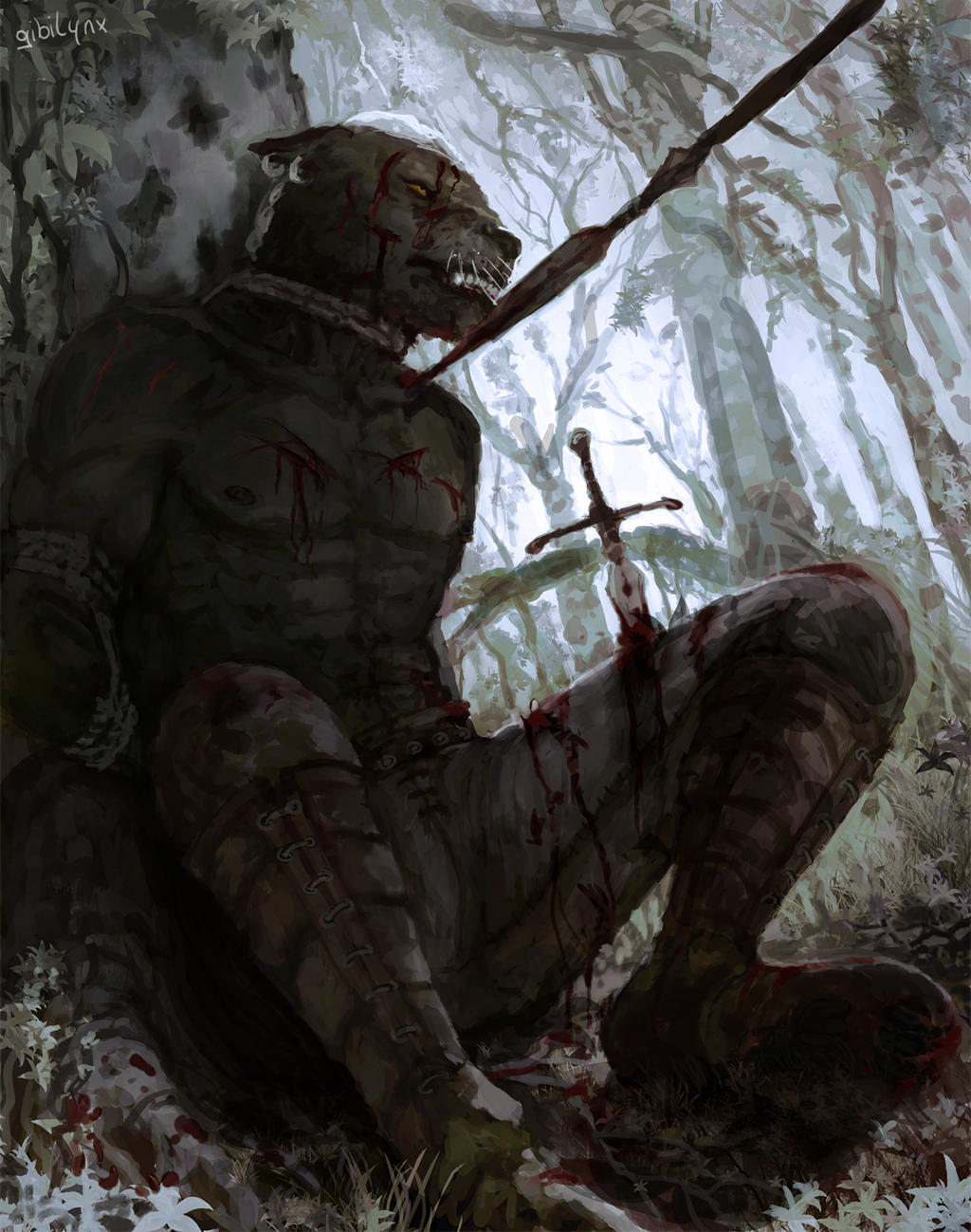 “Da’khe,” he gurgled, blood streaming from his mouth and nostrils. His eyes were swollen shut. He wanted water. “Da’khe,” he repeated. In his panic, Ma’Kir yanked his dagger from its sheath and drove it into the Khajiit’s neck. He didn’t ask for water again.
Ma’Kir looked over his shoulder. His companions stared at him in stunned silence.

“Why are you looking at Ma’Kir?” he said with a tremor in his voice. “This one’s show has ended. You know what to do, get it done.”

The sellswords nodded their heads slowly and continued their work.
Ma’Kir wiped his face and bent over the freshest corpse of the lot. “Ahziss uradith, ra’trevan,” he whispered apologetically.

In the distance, the noises of the fighting ceased. Ma’Kir looked over his shoulder and saw the lone survivor–a Bosmeri woman. She was sitting upright, clasping her left shoulder in her hand, bow and arrows scattered in orbit around her on the ground. She was looking over the river in silence, either unaware or indifferent to the group of strangers lifting the dead from their resting place. Ma’Kir decided to leave her be. He had been responsible for more death than he was accustomed to, and it should be left at that.

By the time it was dark, Ma’Kir counted sixty-eight bodies. They stacked onto the cart like staring, bleeding logs. The flies of the humid Pelletine region were incorrigible, and so Ma’Kir threw a hemp tarp over each cart to avoid having to deal with maggots.

Ma’Kir stood back and wrung his tail nervously as he regarded the large burlap mountains-on-wheels. It wouldn’t be enough, and he was running out of time. As they made camp for the night, Ma’Kir took first watch and placed the preserving oils upon the collected dead. When he had finished, he sat with his back to a rock, gazing intently into the fire. He shouldn’t have let that Bosmer live. He cursed himself. She was probably dead already, and he needed every corpse he could get his claws on. There were twenty back in Senchal and another sixty-eight here. That made for eighty-eight, and Jo’Tha had promised Y’Shaneel one hundred and three.

The obvious answer dawned on him slowly. He glanced over his shoulder at his sleeping comrades, their chests rising and falling softly, their snores mingling with the chirping of the nighttime insects. There were fifteen.

In ten days, the cadavers were taken to Y’Shaneel’s bloatship and were loaded under the guise of mediocre Colovian tapestries to avoid uncomfortable questions. Despite this precaution, it seemed the entirety of Senchal’s populace had heard of the true contents exchange. Ma’Kir saw Y’Shaneel off, albeit maintaining a sufficient distance to avoid retching. Even with such precaution, the sight of the bloated whale brought bile to Ma’Kir’s throat.

Ma’Kir watched the floating corpse as it inflated somewhat more, causing the wrinkles in its patchy tumored hide to become further pronounced, and it lifted several meters into the air above the bay. The whale about-faced, and, with a trail of white flakes made passage to the west. Ma’Kir continued watching until the whale became a speck, disappearing into the sunset, and with a sigh of relief, made his way back to his employer.

Several weeks had passed. Senchal had nearly forgotten its run-in with the Sload and business had continued as usual. Ma’Kir found that ever since he “fudged the numbers,” as he had explained to Jo’Tha, he was met with occasional sleeplessness; his dreams were haunted by the panicked faces and gurgling cries of the men he had slain, and he often felt as though someone else had done that horrible thing, certainly not Ma’Kir. Despite a veneer of normalcy, Senchal had seemed different to Ma’Kir ever since he had returned with the Sload’s ill-begotten goods. Despite his nighttime troubles, the noise and scents of Senchal’s market more or less allowed Ma’Kir to relax and fall back into his merchant’s routine.

That is, until three more specks appeared, floating over the sea’s horizon.