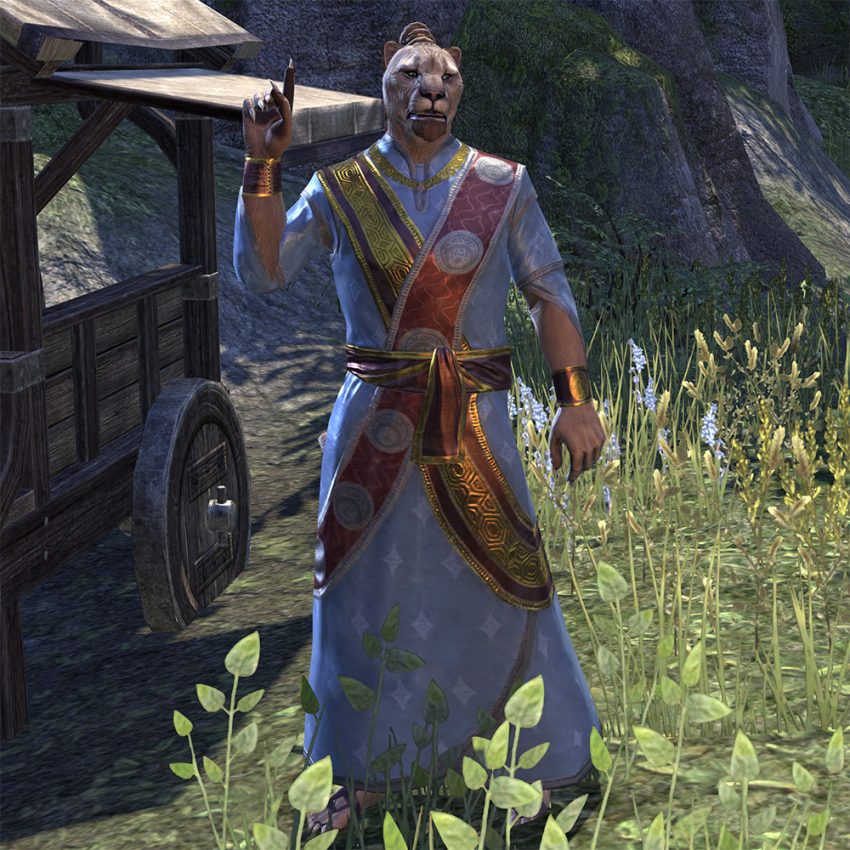 Every once in a while, you come across a work that is more than what it seems on its surface. The title and its contents are often obvious enough, but the hidden value of the work is in how it informs your reading of other works. And to me, that is what Khunzar-ri: Origin is all about. Yes, it’s also the telling of 3 potential origin stories for an important Khajiiti cultural hero. However, Khajiiti lore is unique in that they are sort of like a third party to the Man vs Mer argument that defines the history of the Elder Scrolls universe. To them, Anu and Padomay are not opposing forces, but a married couple. The moons are their own spirits, not the body of Lorkhaj (there’s a third moon for that). They are even, arguably, their own Tower. So when the Khajiit have something to say, I find it’s worth listening, as their perspective is unique. Which brings me back to Khunzar-ri.

So, like I said, Khunzar-ri: Origin is a compilation of 3 different potential origin stories for the Khajiiti folk hero, Khunzar-ri, who is a really entertaining fellow and worth reading more about. But the particulars of the 3 stories (except maybe the final one) are irrelevant to the point I am trying to make; my focus is more on the introductory paragraph. Posted here for better discussion, it states:

Of all the Khajiiti heroes, none invokes such a sense of adventure and wonder as the mighty Khunzar-ri. Like many of our myths and legends, the stories associated with Khunzar-ri often contradict one another and hide important truths behind allegory and allusion. Such is the case when one considers the tales that describe the origin of this beloved hero. Here are three of the most popular stories that tell of Khunzar-ri’s first adventure. Notice how different each one is. Can they all be true? Some Moon-Singers believe so, though at least one revered lore master claims that the truth concerning the origin of Khunzar-ri lies in the intersection of all three.

So, let’s examine the first bit that clues us into the fact this is meant as a meta-commentary. “Like many of our myths and legends,” is a mostly irrelevant tidbit for discussing THIS particular one; others are being brought up to compare/contrast with this one to make a point. So, they “contradict one another and hide important truths behind allegory and allusion.” This, to me, is essentially just stating the obvious about much of the lore about and within the Elder Scrolls universe- a lot of contradictory happenings, and a whole lot of allegory and allusion as opposed to outright stating, “this is this.” The piece then presents us with the 3 accounts and asks us quite directly, “Can they all be true?” It then answers this to the affirmative, that yes, these seeming contractions can all be true.

This is meant to be taken as more than just, “All of the different accounts of Khunzar-ri are somewhat true;” this is meant to more directly commentate on the lore of the Elder Scrolls universe as a whole. It’s why the other myths and legends were brought up in the first place. So basically, this is Zenimax telling the community, as a whole, that each bit of lore is important in its own right; even things that seem to directly contradict everything else are there for a reason. And then, if we go a step further, we are told that “at least one revered lore master claims that the truth concerning the origin of Khunzar-ri lies in the intersection of all three.” Now we are being told that not only are seemingly-contradictory pieces all somewhat true in their own right, but we are directly being told that to get a better understanding of the lore, we must produce a synthesis of these seemingly-contradictory ideas. In other words, it’s not either/or; it’s both/and. As the third origin reminds us, both/and isn’t just a suggestion, but the actual lore for how multiple events wind up shaking out due to Dragon Breaks. There need not be dilemma in lore, but a synthesis of ideas, and figuring out how seeming contradictions mesh. And that is where I will leave you all, with this more meta reading of an otherwise enjoyable piece of Khajiiti lore. I hope you loved it.