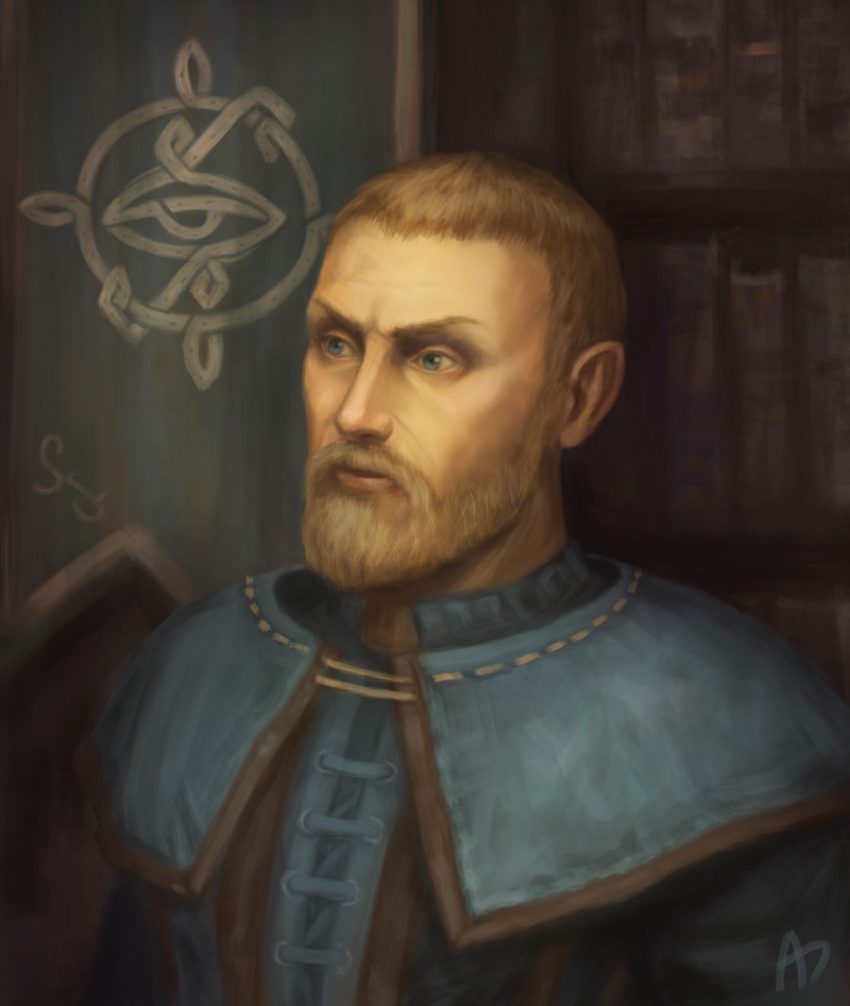 An account of a Breton soldier, a survivor of a battle fought between Bretons and Yokudans at Bangkorai Pass (dated to circa 9th century of the First Era)

In the Battle of the Pass, the old legends were given form again. Trust my account, for I was there, when we Bretons held off the relentless Yokudans and halted their advance.

We heard reports of what were they capable of. Thousands of elves and even our own countrymen fell beneath the shining swords of the few. Our knights, despite wearing plate and carrying shields, were simply cleft in twain whenever one of those, who called themselves Ansei, swung their blade. No armour, no magic, not even the skill to parry, could measure up to what the dark devils wielded. Bretony was doomed to fall.

But some of us remembered the old stories. Our ancestors were in similar situations before, and prevailed. When the Nords raided our strongholds in the east, they had their Tongues, whose Voices were powerful enough to knock open a gate, call down a thunderstorm, or bury men alive. When the Kragen coveted the Reach from us and went to take it for themselves, they played their colossal brass instruments beneath the ground, and our towers danced to their music until they fell. When the Direnni defended their right to our servitude in their fields and beds, they sent down powerful magics to drown our warriors until our resolve was broken.

But we survived through all that. The warrior druids were with us then, and they would be once again. When they hummed their tune of peace, taught to them by the dragons who lead us to this land, they were invulnerable. When a line of the druids stood against the formation of Tongues, they blocked their Shouts and reflected them back, and our strongholds were saved. When they sang their quiet song to the earth itself, the tremors from the Dwarven machines ceased. And when the Direnni sought to smother our rebel knights in magefire, the warrior druids were marching with them, and they drank the spells so the knights could live and win our freedom.

In the Bangkorai Garrison, our men were losing all hope, for the Ansei were an unstoppable calamity. If the Pass were to be breeched, all Bretons would’ve met the fate of the Corelanya clan, and be condemned to oblivion. But some of us had hope. We had faith that the warrior druids would appear in the hour of need. We prayed to their patrons – to Kyna, Julien, Bormeau and even Galen, the land itself – so they would come. And come they did.

Just like in the oldest legends. They were old men of wild appearance, in flowing white robes stained by dirt and grass, with long hair and beards, showing their unending wisdom to the world. They wielded spears, sickles and clubs, but their true power came from within, and I consider myself blessed for having the opportunity to witness it.

When the Yokudan horde appeared on the horizon, it was dawning. The Ansei, their dark skin encrusted in blood of the Bretons they have slain, were leading the charge. They held their glowing, unnatural blades high and ready, aiming to simply shred the walls of the Garrison into rubble, but they never had the opportunity. With the warrior druids amongst us, we did not cower inside the fortress. We were in the field, intending to meet the dark host head on.

The druids stood in a line, in the front. Their weapons were sheathed, and they were singing. A powerful, low hum was emanating from their chests, charging the air around them with long forgotten magicks that only the dragons knew. The skin of the druids vibrated with the same power, and it was as if their forms shimmered. The Ansei charged mindlessly into our lines, intending to cut into the seemingly helpless old men with their spirit swords, and ending their lives forever.

But their blades never made impact. Too late the Yokudan bladesmen realized that the skin of the sages was not skin anymore, but instead, dragon scales in essence, imbued with a song older than their sword song. When each spirit sword cut into a warrior druid, it shattered into brightly shining embers, and Ansei were left disarmed, confused, and clutching their heads in pain.

That is when the druids stepped aside, and our knights took the lead, sending the Ansei to their maker. The first wave of the angered Yokudans clashed with our lines, and we fought them and withstood their assault. The spirit of our enemy was wavering, having seen their leaders perish so unceremoniously, and soon; they were on the run.

Never again would the Ansei challenge the borders of Bretony, for the druids would not suffer them to do so. They are the protectors of our land, and whenever the odds are unfairly stacked against us, the leave their hidden covens and come aid us. Their dragon song is a defense we need in order to be safe from unnatural weapons of our neighbours, but one that is wasted on mundane enemies or conquests started by Breton kings. Even if we can rely on the druids, we must not grow lazy.

The warrior druids may be the dragon skin of our people, but what makes us strong runs deeper than that. Just like their example shows us, fairness and an even playing field are important when considering a battle. That is why our knights swear to be honourable and uphold fairness. May the heroes of the Battle of the Pass, the warrior druids, set a good example for our people for centuries to come.