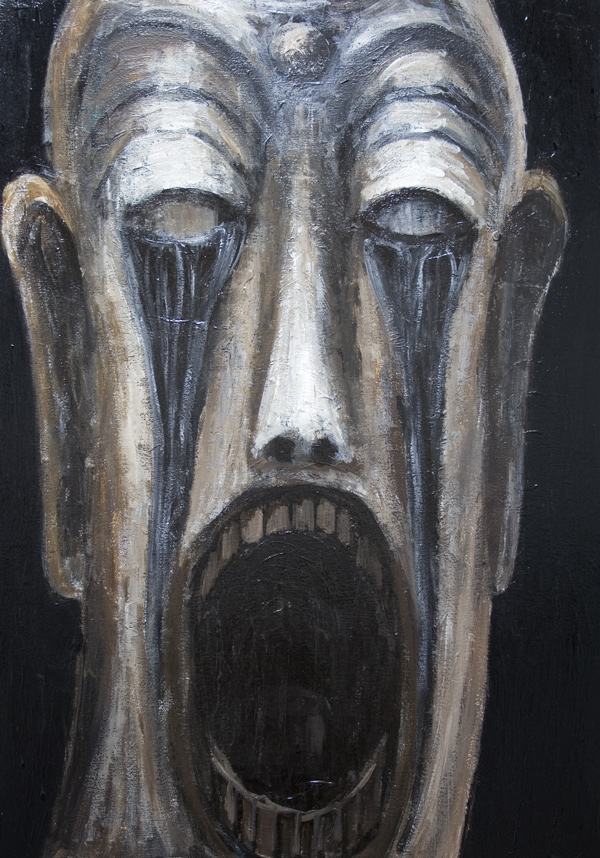 My master thrust me down on my knees before a strange device. His swollen form orbited so the instrument lay between him and me.

I took a hesitant estimation of my surroundings. The hall was long and dimly lit. The walls might be considered bare to some, but their texture made decoration irrelevant. Coarse, pocked coral plucked from the deepest reefs of Thras, with cruel mountains and deep valleys surrounded me on every side. Only one window was within my sight, a concave dome of mucous, filthy with swirling grime upon its surface. There was but little light coming from without.

Inside the hall was a long asymmetrical table, its top uneven surface rose a full Mer’s height, taller than any table one might see in Alinor, Shimmerene, or Skywatch. Situated around the table were a half dozen or so floating globs of living hatred. Their black, beady eyes watched me contemptuously, their feet and jowls hanging loosely beneath their swollen bellies and chins respectively.

The Sload are a repulsive race, with their slate grey blubberous hides marred by signs of growth and unholy decadence.

My master yanked at my collar, its internal coral spikes puncturing my skin for the thousand-and-first time. By now I was used to the pain.

“Play,” he demanded a second time.

Upon the device at my folded knees sat two mallets, one with a spherical head and the other with an oblong spiked peen. I took them in my hands and regarded the device itself. It was triangular, its most prominent point aimed somewhere to my left. On the furthest edge were strange metallic modules. They varied in size, shape, composition, and even in color. Insofar as much as one color can be different than another in Thras. After a while everything is grey.

My master had retreated, floating upwards to the table to join his cadre of monstrous behemoths. They began to speak in their guttural, spittle-laced, malefic tongue, sounds which, on their own, are offensive to even the most uncouth ears.

The rear components of the device, ranging from spherical to coiled to organically articulated blobs of pig iron scarred with rust, were complemented by a series of strings of different weights and lengths.
I took the mallets and begun to experiment with the device. By Phynaster, the sounds it produced were abhorrent. Low rumbling echoes and ear-piercing screeches reverberated from the instrument as I ran the mallets along its contents.

Even when I paused playing, my mind gripped the noises and repeated them to me. I had no choice but to attempt to drown them out with more playing. I began to sweat. Surely if I kept playing the sounds would stop. But they echoed even louder.

I changed my technique to attempt to alter the sounds in my mind, but the more I played, the more the horrid din doubled upon itself, duplicating its own acoustic horrors in unfathomably clever ways. I tried the strings. They screamed at me. I screamed back. This machine will not break me. I will play until the harp itself submits to its own madness.

And so I smashed and tapped and pulled and prodded with my mallets. I could see the face of the machine as a cloudy reflection upon its triangular flattened surface. I caressed its face with the spherical wand, luring it into a sense of false security. When its dastardly vision of itself became clearer, I knew I was closer to my goal.

Its narcissistic visage, with pointed beard and eyes like the Sload, smiled at me. Enraged, I hit it on the nose with the peen of the second wand. He shouted at me. His hands beckoned me forward, taunting me.

You cannot madden me, it whispered to me. I am your madness!
I screamed again in primal fury, my mallets twisting and banging and thrumming the machine. His face turned into my own, contorted in agony, eyes impossibly wide and staring. The face began to laugh. So I screamed louder in defiance.

“And now one will notice the true ingenuity of the Harp,” Y’Shanet gestured to the Altmer, mercilessly wailing upon the instrument, its noises mingling with his screams. He was staring wide-eyed into the middle distance.

“What did Y’Shanet say these tonal vibrations were called in the Starry Heart? ‘Music?’” Asked Y’Shanet’s colleague K’Nysta.

“Affirmative. These frail, pathetic Mer are quite fond of it, as one has been told. K’Nysta can surely see its expressions of joy.”

“Indeed. The sounds are pleasing, one might suppose. Shall the Mer continue playing?”

“One believes it shall.”