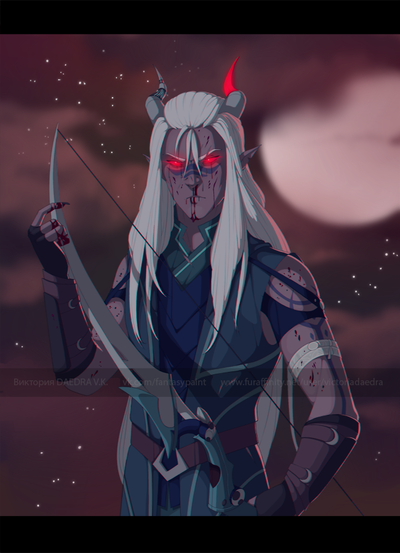 Vivisitium is regarded among the Ashlanders as the child of Mephala and an old Telvanni witch who remained loyal to the Good Daedra after the Tribunal ascended. Unlike most autonomous and powerful Daedric entities, Vivisitium is always referred to in the neuter, even if it takes hermaphroditic form or is depicted with exaggeratedly large genitals. Whereas Mephala is thought to be the Ashlanders’ Fertility God, Vivisitium could be colloquially considered their Infertility God.

Mephala herself is a paradox, life and death, sex and murder. She balances out passive Azura and active Boethiah in the Chimeric pantheon, and bears the marks. We look to an old source to understand this aspect of Mephala. In an epistle to the Aldmer people, named the “Glory to the Webspinner”, written to curious elves before the Chimer’s departure from Elven territories, the Spinning Prophet writes, “Glory to the Webspinner! Though murder is foul, its conclusion is beauty. Wipe away the veil of time, weld conclusion to cause to revel in the art of murder. So it is with Our Lady. She flayed the Spirit that Fills the Air and wears her skins round her womb. She pulled the teeth from the Gravewalker and puts them on as talons… There are three mephallic acts; the first is Murder, through which one that existed is cut away, and so that that thing is no longer in existence… The second is Sex, whereby that which does not exist is brought forth into being…. The third is the Lie, whereby the existence or non-existence of something is questioned and altered.”

This understanding of Mephala is vital because Mephala herself has given a fourth interplay to her spawn, Vivisitium. Vivisitium’s sphere is difficult to distinguish in so many words, but the essence of the demiprince is the Zero-Sum of Sex and Murder. It’s sphere includes the concepts of stillbirths, infertility, infanticide, matricide, and death during childbirth, among others. It is mostly worshipped among the Ashlander people as a minor god, idols of it might scatter certain tents whose inhabitants feel themselves connected to Vivisitium (e.g. orphans, infertile woman, eunuchs). There is an expression in their language that equates to “the Cut-God has filled your crib” that is used when all possible outcomes are horrendous. The reasoning is that a crib filled by Vivisitium means that either the mother died during childbirth, or a dead infant lies in the crib, and opening the swaddling of the child will reveal which has occoured.

Notably alarming rituals exist to venerate and find favor with Vivisitium, outlawed by most Ashlander tribes but persisting, nevertheless. The most often mentioned has many names, most of which are euphemisms. One youth I met from a tribe called it “the cold penis” another called it “dead man tupping” but the most common and formal name for the ritual is “The Song of Substitution”. First, a willing woman who had reason to believe she was carrying a stillborn, would have difficulty during childbirth, was infertile, or had an otherwise similar reason to undergo the ritual would request it of the elders and prepare the necessary elements. Men who were either prisoners of war or unredeemable criminals were chosen as the sacrifice. The male is given herbs to stimulate his nerves, a medallion is placed in the back of the birthing canal of the female, blocking the transmission of fluid, and daedric script revering Vivisitium is written across both participants. The two begin to copulate under the watch of the elders of the village, whom often employ lesser daedra to move the unwilling male in the process. After a brief period of extacy, the male begins to no longer require the aid of scamps or seducers to continue with the ritual, willingly becoming a participant. Still unable to stop, he begins to complain of burning and pain, his colors turn pallid, he rapidly loses weight and the markings drawn on him move to the woman’s stomach. The result is a desiccated male and a debt paid in advance to Vivisitium, so that a child may be born without difficulty. Children resulting from this type of ritual have distinct personalities and are often seen as prized members of society; they have pale-white irises, are soft-spoken, have exceptionally long life-spans, have slender features and extremely straight hair, the females are often infertile, and the males have sterile daughters. The last qualities sometimes lead to chain-substituting every generation. Doing so for more than three or four generations results in deformed, pale, hairless, long-armed children often sent out of the village to live in isolation. Tales of these children are used to scare to misbehaving Ashlander children into obedience because they are considered to have an insatiable appetite for young children. In reality, most don’t survive more than a few years alone in the ashlands, and the ones that do seldom see civilization.

Vivisitium is worshipped by no less than three independent covens of Dunmer witches in the ashlands. One was patient enough to allow me to ask some questions on their god and its worship. The witches themselves had all either castrated themselves or killed their infant child and removed their wombs in order to join the coven, most appeared extremely youthful and in good health, despite their missing organs, but easily aged five or six times their appearance. I even thought I caught a few glimpses of a long-armed and pallid inbred child of Vivisitium among their number.

My conversation with the cultist yielded fruit. She was a thoroughly unpleasant woman, bent on trying to convince me to castrate myself or kill my infant child (initiates lose the ability to distinguish gender from secondary sex characteristics, referring to everyone as “it”, so she recommended I do either). She did, however divulge the following in her attempts to win me over: Vivisitium’s pocket realms of Oblivion are collectively called the Barren Fields. They are used by many Daedric Princes and demiprinces (who for some reason or another don’t want their enemies to remain in their respective realms) to imprison and torture their enemies. Succulus was a Colovian nobleman who paid his way out of debt with the help of Clavicus Vile, whose only condition was that he be kinder to his wife and always eat her cooking. When Succulus arrived home one day, Clavicus had driven his wife to madness and she had prepared their own son for supper. Succulus refused to eat the meal, and so lives in his own Barren Field where the fruit is always just a little too high on the branch, and the water recedes when one reaches down, leaving him eternally hungry and thirsty. Some say Molag Bal even sent Mannimarco to a Barren Field for some particularly intense psychological torment after his betrayal during the Interregnum (the King of Rape being more focused on physical torture). The horrors of the Barren Fields are often mentally taxing in that perhaps one wouldn’t suffer greatly if they spent a few hours there, but given thousands of years, all hope is drained away. Faithful worshippers of Vivisitium are promised freedom from all punishment and are permitted to spectate the infinite horrors to their hearts’ content, as well as join the Daedra on any Fields that may require hands-on participation.

Lesser Daedra that serve Vivisitium include the Womb-Cutter Scamps, Bloodletter Dremora, Broken-Tusk Xivilai, and a council of five greater daedric titans, the cheif of whom is known as the “One-Armed Balance”.

Worship of Vivisitium was outlawed by ALMSVI in 2E44 following an infiltration of Vivec’s temple in which poison was slipped into His wine in an attempt to render the Warrior-Poet impotent. Vivec punished the cultists by publicly regenerating their genitals and bedding them.

Vivisitum’s name is where we get the word for “vivisect”, a practice that began with Telvanni wizards.

Some sources claim that Mephala was aroused by Vivec’s murder of his own children, resulting in her copulation with the Telvanni witch.