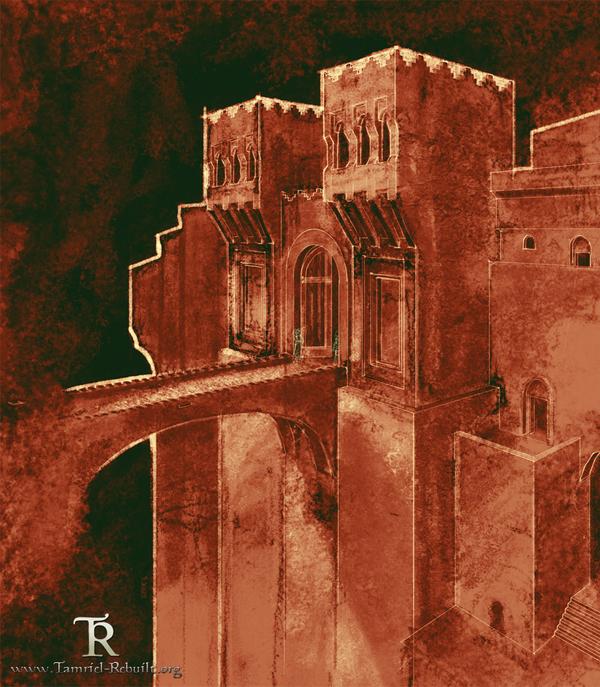 Magic and Alchemy in Redguard Architecture

I must admit that I had never given Redguard and Yokudan magic much thought until I had a life-changing experience in Hegathe. My fixer Maha suggested I try a local and cold treat called “falooda,” which is made from thin noodles with syrup made from sugar and rose water, then flavored with lemon, lime, fruits, almond, pistachio, and other flavorings and spices. It was a welcome respite from the blistering heat, but I was shocked when she explained that no direct magic was used to produce such a cool confection. There had been no frost salts, no powdered ice wraith teeth, and no frost spells.

Utterly fascinated, I asked her to arrange a tour of how such things were possible in the blistering heat of the desert. This is how I came to discover the use of magical principles in Redguard architecture. In order to preserve ice, meats, and assorted fruits and foodstuffs, the Yokudans had built these domed ice-pits across the land that were so cold they could keep ice frozen for extended periods. The Redguards had adapted such structures to afford themselves the luxury of iced goods in the oppressive heat of a Hammerfellian summer.

These ice-pits are around 60 feet tall, and had a large subterranean storage space dug out from under it. The exterior itself was made from a special type of mud clay called sarooj which is composed of clay, sand, lime, goat hair, egg whites, and ash mixed in a special proportion which made it extremely resistant to heat transfer. As a result, the inside stays cool, while heat from the outside is prevented from entering the building because of the thick insulated walls. This combined with the subterranean storage ensured that whatever goods are stored in the pit stay cool. The Redguards use alchemy but do not limit themselves to potions, but rather apply the alchemical solution and its effect in the very walls of their buildings.

There is more, however. While the use of alchemy is present in Redguard architecture, they also harness the wind – “Tava’s Gift” they call it – to react with the ice-pit and many of their buildings to produce a cooling wind, even in the height of day.

At the top of the dome was a small hole, or series of small holes called windcatchers. Typically windcatchers were pointed in the direction of the prevailing winds. The small hole, or series of holes of the ice-pit’s roof ensured that air passed into it at great flows. What resulted was a great amount of outside air entering into the pit at high speeds, producing winds that are below freezing. Typically the windcatchers are cut in such a way that the incoming jet of air would be directed onto the storage pit.

Without the use of a spell, scroll, enchantment or incantation, the Redguards produce a constant cold wind and can keep their goods frozen just through small architectural tricks and a bit of alchemy.

Some say the Redguards abhor magic, but I can clearly see that they simply use it differently. There is book called “Wind and Sand” by Afa-Saryat which is an enlightening read on how Redguards see and understand magic. With this new-found understanding, it becomes clear that the Redguards use magic in rather different and arguably more innovative ways than we in the rest of Tamriel do.

If their windcatching domes and heat-resistant walls weren’t enough, many homes, buildings, and public areas have large pools of water. From what I’ve been able to discern, much as water and heat produce steam, these pools serve a similar function. Like the wind wears down the rocks, the hot air wears down the water which breaks down into its infinitesimal components. This effect traps the heat and provides a cooling effect to the surrounding area, not unlike an area of effect spell. Again however, this is all done naturally.

This is the true heart of Redguard magic; it is so natural and inherent to their culture that they do not see it as magic. There are no incantations, gesticulations, scrolls, staves, or other magical objects required. It is a simple and subtle manipulation of the natural world around them that has allowed them to thrive in an area once known as the “Deathlands”.