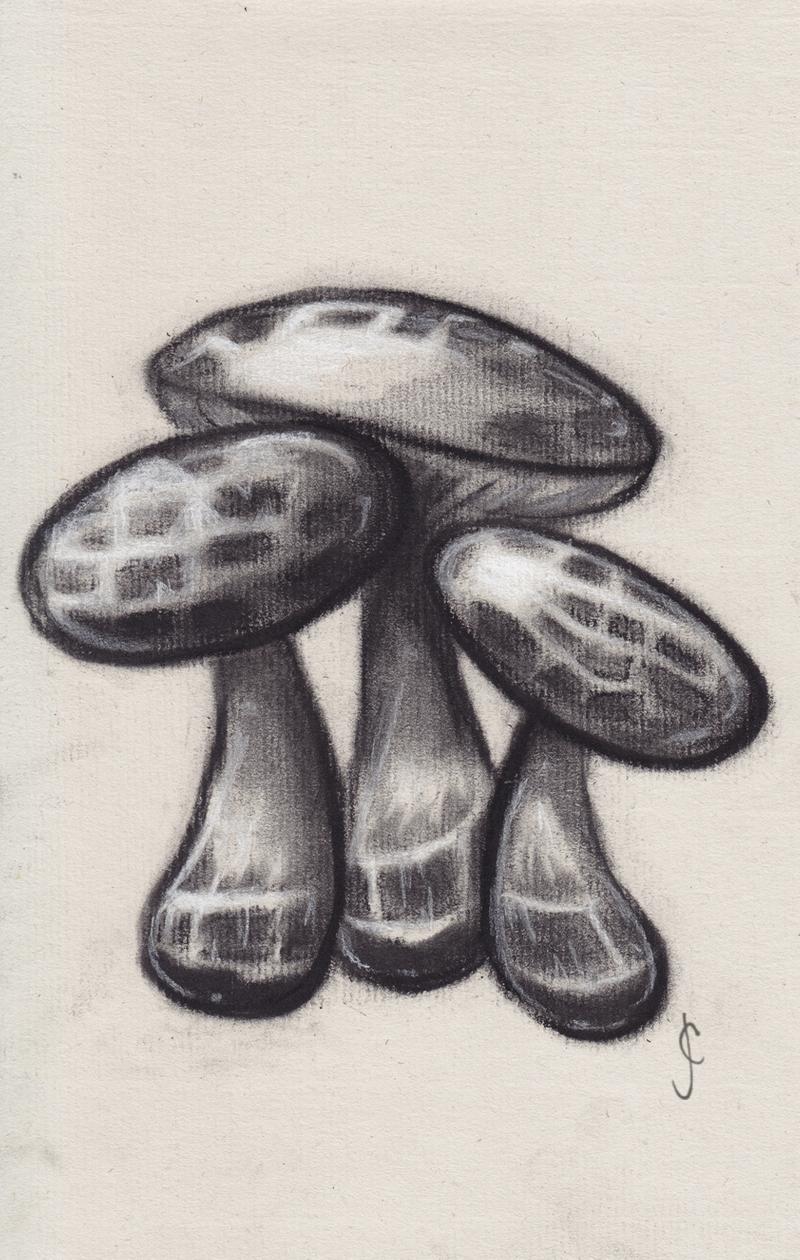 Excerpt from “On The Fungi of Skyrim, A Compendium”, by Hakan Toraldsson

Mora Tapinella is a bracket fungus found throughout Skyrim, prized for its alchemical properties, particularly in boosting Magicka. Do not be fooled by its Imperial-sounding name, it is indeed a native fungus to Skyrim, though my sources indicate its range spreads further south beyond the Jerall mountains, as well as into the eastern extremes of High Rock and Hammerfell.

A small fleshy bracket fungus, its fruiting bodies vary from 1 to 4 inches in width in fully. Initially a soft brown cap with creamy white gills, changes occur as they age, with the upper surface darkening and toughening, particularly after frosts.

In colder, more northern holds, the normally thin, dry and spongy layer that forms just under the outer skin is found to be thicker – I can presume this is to protect its inner essences from the cold.

After extensive study of their spawning cycle, I have determined that, in Skyrim’s climate, the fruiting bodies take a year to fully mature before the gills open to reveal pale creamy spores that drift on the wind. Their reproduction cycle is slow, but established colonies fruit prolifically and throughout the year.

While Mora Tapinella is a widespread fungus in Skyrim, it most certainly has preferred habitats.

In Falkreath Hold, the large forests provide ample deadwood from which the fungus derives some of its sustenance. The moist and shady conditions, with a mild climate, are ideal for the growth phase of the fungus.

It is hardly found in the Rift, where there are drier conditions, but primarily the fiercely competitive Scaly Pholitia prevents it from gaining much foothold. The fungus demonstrates a clear preference for coniferous wood – it can barely be found in the birch forests of the Rift. Interestingly, Mora Tapinella can also be found in the Reach, despite the barren landscapes which lead to dry and windy conditions, colonies seem to thrive in certain areas where upwellings of magicka from deep within Nirn come to the surface, resulting in increased levels of background Magicka.

Mora Tapinella’s fruiting bodies are in fact the last stage in their lifecycle, though they can sustain these caps for a long period of time, with mature specimens producing spores continually until death. The bulk of their growth phase consists of long, threadlike roots that burrow through their host deadwood like spiderwebs.

While experimenting, I was surprised to find that the amount of wood they consumed as they grew was far smaller than the mass they gained – indeed, an isolated specimen in a sealed jar actually increased the total mass contained within the jar by small amount!

In an effort to understand this strange phenomenon, I contacted a colleague who works in the College of Winterhold. With his assistance, I was able to determine that the fungus in fact draws on the local magicka in the environment as part of its metabolic processes.

Intriguingly, it stores this magicka in a spongy mass near the fruiting body’s center, in the form of a mucosive clear liquid. Based on my measurements of the growth rates of specimens, I have concluded that the network of threadlike roots are what allows the fungus to collect so much magicka, with greater areas of growth resulting in larger yields of Magicka.

I hypothesise that it uses this store of magicka to maintain a temperature above freezing within itself, for indeed, even in areas with heavy snowfall, I have only seen a thin dusting covering them, that did not last long.

The fungus stores magicka in its core as the aforementioned mucus, but direct consumption of this fluid does not yield much of its actual magicka contents. Raw Mora Tapinella is in fact poisonous and contains mild hallucinogens (of which the latter are used by Illusion casters to loosen their minds, allowing them greater insight into the spells they cast).

Many alchemists treat this fungus differently, but the highest yield of magicka per pound of Mora Tapinella, I have found through the following method:

Lightly heat the mixture until a colourful metallic sheen appears on the surface – drop the flame and let it simmer – this destroys the essences from the root system that draws in the magicka against the concentration gradient. When isolated alone, these essences make a powerful inhibitor that prevents the regeneration of a mage’s magicka.

Strain off the liquid and leave in a settling flask – the essences will separate from the oil, which you can skim off the top.

Before the air contaminates too much of the mixture, mix in an extract of Red Mountain Flower petals – this catalyses the breakdown of the essence into a form that is no longer as reactive with air, but also allows the imbiber to utilize a hundredfold more of the stored magicka than the unrefined extract.