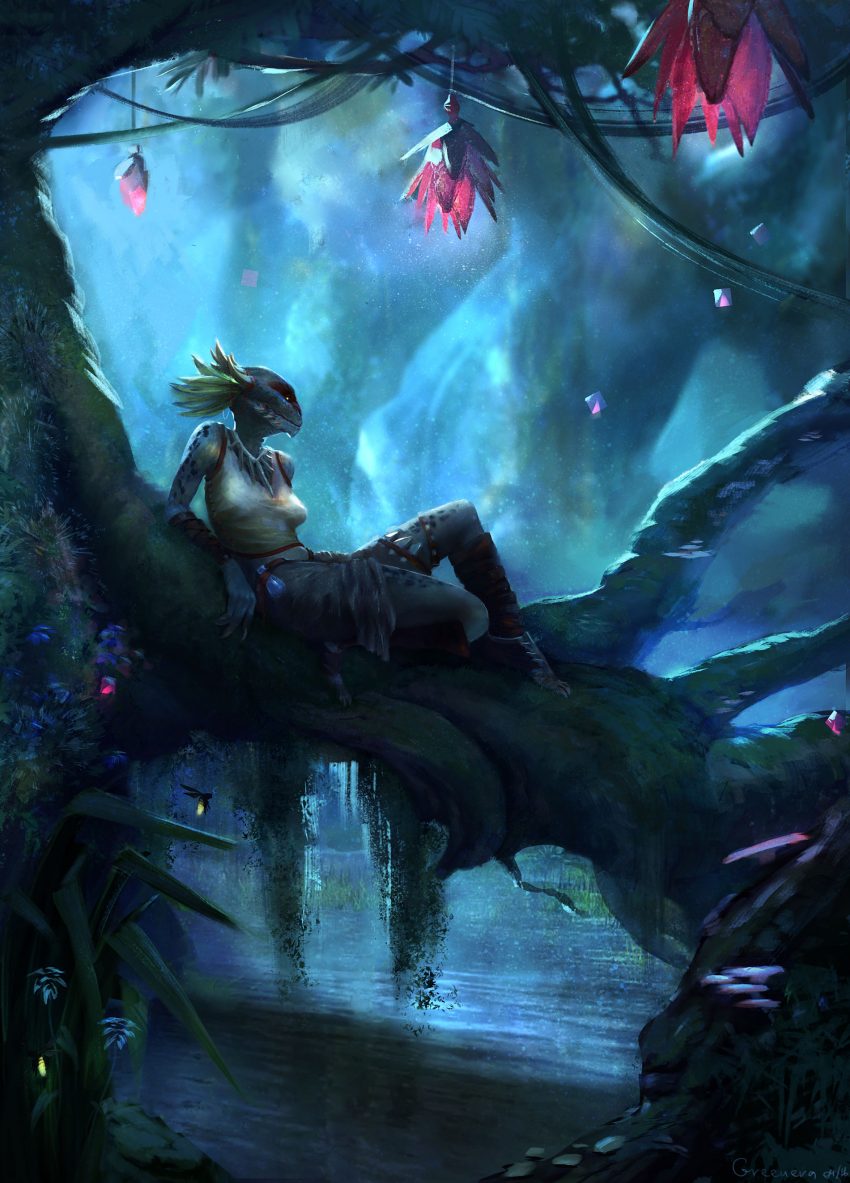 Basks-in-Moonlight finds this “interview” most intriguing. The Hist is not normally something that can be understood or interpreted to place into simple words. The emotions and feelings the Hist elicits, especially to we Saxhleel, are incredibly deep and complex. That one of (what appears to be) non-Saxhleel origin can apparently commune with the Hist in such a way could be potentially groundbreaking. The era this piece was written in is unknown to me, but the interviewer appears to be of human origin. Regardless, the specific “rogue” Hist tree they have described has not yet become known to me, so the entire interview could just be a clever fabrication. Perhaps the author, as skilled with words as they may be, should wean off the skooma and moonsugar.

I approached the tree warily. I had been travelling for weeks – for a time, which now felt long ago, with an Argonian Saxhleel guide; though he left my journey some time ago, wary of what lay ahead in our travails. It would have been oppressively dark if not for the moonlight eking out between leaves and wooden limbs vibrant with life. Torchbugs hung in the air, humming and whirring in motion with the breath of the swamp. The tree sat in the middle of a small clump of rounded land that could barely be described as an island, barely large enough for the tree itself and its many twisting roots. The “rogue” Hist tree that had been described to me so vividly in detail now lay before me, resolute in its eudaemonia. Ringed around it was a shallow bed of dark green water, teeming with life and activity. I hiked my trousers and sloshed past cattails and lilies that lay previously undisturbed in the water. Though the tree had many great leaves that hung above it, knit close enough as if it were a thatched roof, a curious ring of moonlight exposed the area just around the trunk. Finally I made my way onto the small bank. As I approached, though, I could feel something. Not feel necessarily, but sense. I reached my hand out tentatively, my breath caught in my throat.

HIST: It seemed as if the Hist was communicating already to me. The smallest movements of its leaves, the quiet creaking of its great trunk, the subtle swaying of its many vines and roots. Each motion seemed almost to convey some notion or idea. This particular Hist was alive with thoughts and feelings. Though the swamp surrounding us was practically a cacophony of nighttime activity and noise, it felt as though the entire world had gone silent. I gulped in the moments in between action and reaction. Finding my voice, I finally spoke for what felt like the first time in days.

ME: “Do I say something aloud? Is this how we may convene, oh wise tree of the Hist? Though perhaps the title of “Hist” is not one you would prefer now.”

HIST: I felt a sense of warmth crawling up my neck, now in retrospect realizing it as a reply. A whispering pervaded the innermost recesses of my mind.
I did not at first understand what was happening, and whirled around, attempting to find the source of the noise. Upon realizing what had just overcome me, I turned back to the Hist.

ME: “Do you understand language? Is it possible for your being to communicate with one like myself in such manner?”

HIST: It felt as if someone were suggesting quiet thoughts directly in my ear, persuading me in the subtlest of ways. The formless, shapeless whispering grew – not louder, but more conscious to me – as I approached the tree again.

Finally, after another moment’s hesitation, I laid my hand upon the mossy tree trunk. Though it did not move beneath my palm, it felt positively alive with activity and thought that should not have been possible. It did not, as I had expected, feel sinister in any way – this was not the “rogue” nature of this tree I was informed of. I sensed eagerness coming from somewhere deep within the tree itself, as if it was excited and ready to commune with me.

HIST: Not quite emotions, but notions flooded my mind, telling me in ways without words that I was lucky to be allowed such company, and that the barbaric nature of speech would not be necessary in their presence.
As the connection between me and the Hist grew, I began to feel like an extension of the rich green tree limbs. Intensely concentrating on my own existence, my own oneness apart from this Hist, I continued, now using the only form of communication I knew – language – in my head.

ME: “Do you understand what you are? What I am?”

HIST: The Hist did not reply with language as I had, but with thoughts and memories that were not my own. Flashes of Saxhleel clutches, eggs hatching and new life being brought into this world. All that was known to them was the Swamp. They believed the entire world an extension of the Swamp. They basked in the sunlight, swam in the even sun, and celebrated joyously in the vibrant moonlight.
Out of shock I removed my hand from the Hist – I could tell at once that my connection had been broken. With my hand on the Hist I had nearly forgotten who I was, what my purpose was. Now it seemed as if silence had fallen on the world again, the only thing left in its void being the notions of notions that sat in the back of my head at the behest of the deceptively simple tree that stood before me. This was a thing not to be taken lightly, and I felt foolish in having only just understood that fact. Gathering myself, preparing for what I now knew lay before me, I slowly placed my hand back onto the ancient trunk.

HIST: Immediately I could sense the connection reforming. This was a truly eager being, if being was even the word to describe it. It knew it was something more – something beyond simply being, beyond casual existence. This was not a thing with essence – it was essence itself.
I began to understand that communication through words and language was a base form of communication. Henceforth I simply used emotions, feelings, and primal thoughts and urges to commune with the tree. I will attempt to transcribe what occurred to me within and without from this point on using the only descriptions I know.

ME: While connected to the Hist, I realized that time itself was of no consequence. I let my innermost thoughts and feelings describe this question (if it can even be called as such) to the Hist. Essentially, “What is time to you, if it has become nothing to me?”

HIST: For the first time since our “conversation” began, it felt like I received what can only be described as a “mundane” answer. I knew the answer, not from the tree’s reply, but from within me, as a part of the Hist itself. “TIME IS NOT.”

I shuddered, the connection between me and this rogue Hist strengthening with every moment. For what must have been hours, though in all likelihood was most likely only mere moments, I “spoke” with the tree, sharing my memories and emotions with it, though it already knew them all. And in its own way, the Hist tree spoke back, providing me with primordial answers I realized I had always had. Finally, after much deliberation, I reached the question I had intended to ask it from the start. It knew the quandary before I had even begun to think about it.

ME (translated from basic thought and emotion): “Why did you go rogue? Why delineate from the Hist?”

HIST: My mind felt close to bursting, experiencing what must have been every thought, every emotion, every feeling of all of the Saxhleel people to ever exist and beyond. I felt anger, lust, the deepest depression and the highest joy. All of creation and uncreation and whatever lay between and beyond whirled before and around and inside me. I could not see but feel the history of everything laid out before me – past mingled with present which mixed with future. The world sat within my head, disc-shaped at one moment and a pyramid of being the next. There was nothing but everything. The dead and the living and the never-were and the soon-to-be danced together before my mind’s eye in the grandest of life’s majesty, enclosed within a chitinous, swamp water-filled hypersphere of convalescence and energy. I felt everything anyone and anything must ever have felt.
I had not become the universe. The universe had become me.

Again, as before (though which now must have been eons ago), it appeared that the Hist replied with one, simple answer.