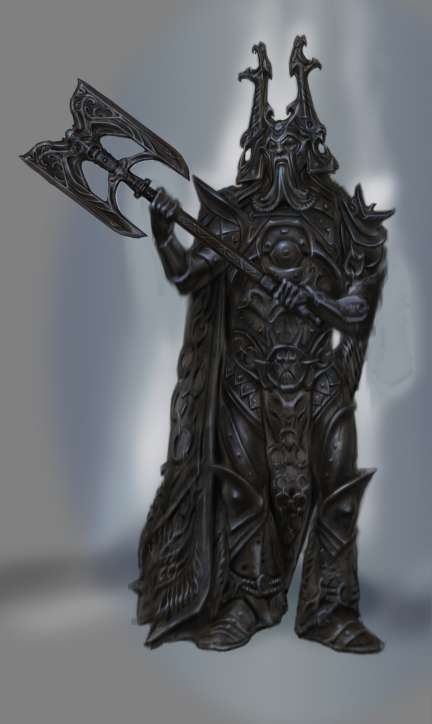 My name is Mylenar Turrianus, and I am Assistant to the Head Enchanter at the College of Winterhold.

My colleagues and I have recently had the opportunity to study several artifacts belonging to the Solitude Museum, in an effort to understand their unique properties.

Of special interest were Daedric Artifacts (under the supervision of the Arch-Mage, her Head Wizard, and several Dawnguard clerics), and the axe, Wuuthrad, on loan to the museum by the Companions of Whiterun.

Many an enchanter has heard of the legendary Daedric Artifacts with otherworldly powers, such as the mythic blade of Dawnbreaker, or the enigmatic Ohgma Infinium. To the layman, Dawnbreaker is a blade of unidentifiable metal, with a hilt made of unidentifiable leather and a radiant core of energy. Said layman would describe an “eerie” feeling in proximity of the weapon, as well as a slight compulsion to pick it up and perforate a Draugr or two.

Dawnbreaker, and indeed many other daedric artifacts, are examples of a specific type of enchanting. They are formed from oblivial essence by the Prince or entity in question, and then imbued with a task. In most daedric items, the task is too complex and convoluted to describe in any mortal tongue, save for dwemeris, and is also influenced by the personality of its creator.

For instance, while Dawnbreaker creates a compulsion with an inherent authority, an item like Mephala’s Ebony Blade is more insidious, and does not make itself known immediately, only feeding the deeper parts of the mortal conscious.

Daedric items have also been known to take on a life of their own, as seen with the legendary sword Umbra, which rebelled against its creator.

This type of enchantment is given power by the item’s creator in the first place, but it can be altered over the eons, or through specific processes. This effect can be seen in the darkened Star of Azura, which was permanently tainted by necromantic magic. Scholars have been debating on the exact process used, and a general consensus was that Malyn Varen attempted a heavily modified version of the ritual used to darken ordinary soul gems, which resulted in its deteriorated state, and his soul trapped within. Only when his soul was purged from the gem could the ritual truly take hold, and permanently wrench the star from Azura’s ethereal fingers.

The second Aspect of this type of enchantment is true mythopoeia, uncatalysed by the whims of a Daedra Lord. The main difference between this type of enchantment and Daedric Artifacts is their material basis, as well as their method of aetherialisation: Where Daedric items are formed from the oblivial materia, in essence the body, of the entity in question and then enchanted using pure force of will on their part, a true mythopoetic item manifests itself over centuries inside a specific, identifiable object, as its legend grows.

The axe Wuuthrad, once carried by the Nord hero Ysgramor, is one of the best examples of a true mythopoetic item. Because of its usage as a weapon of mass destruction upon the snow elves, its legend grew independently of that of its wielder.

Many things are attributed to the axe, but the most consistent part in every story it is featured in is its ability to kill those of elven descent, which has no equal. Analysis of the axe by the senior enchanter and various other specialists show an enchantment-like construct that weaves itself inexorably into the material of the axe. The strongest Imperial seers, in concert with College enchanters, were unable to find an end to the complexity of the enchantment, which seems to grow ever more complicated the deeper one peers.

The current running theory is that through the ages, as the axe sat in splinters across the northern reaches of Tamriel, it has absorbed the tales of its supposed and not so supposed deeds, and was altered through an unknown, but universal, mechanism into a form theoretically capable of fulfilling those deeds.

It is based on these two finds that I and a conclave of other College enchanters have proposed a theory of the “Enhancement of Material Objects by Usage of guided or coincidental Mythopoetic Effects,” or “Mythopoetic Enchantment”.

It does not need to be mentioned that, if one gained the ability to direct a mythopoetic enchantment in any meaningful fashion, their works would literally become the stuff of legends.