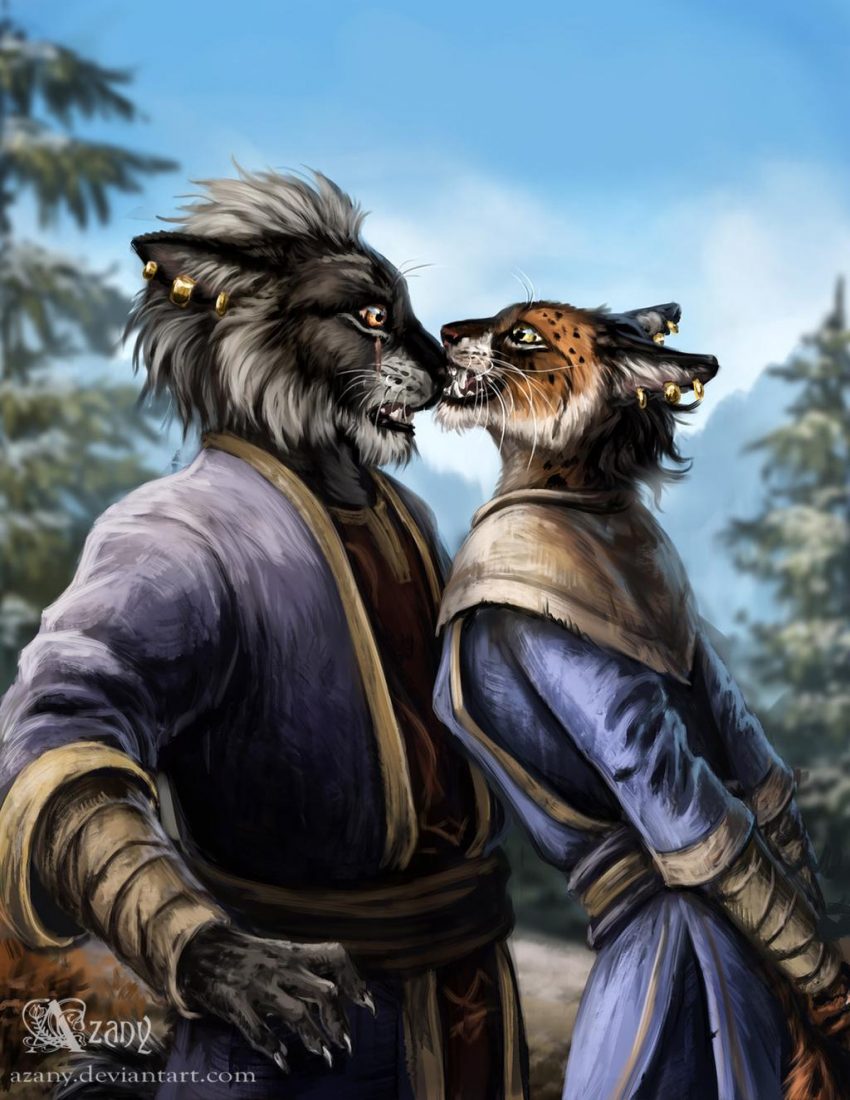 “Im here, mother!” The little Khajiit girl jumped up and ran towards the entrance of her family’s home where her mother’s voice came from.

“Meyra, my sweet daughter, come here, we have to get ready. Your sister has her big day.”

The girl fluffed herself up and declaimed: “After many phases, Fadomai said to Ahnurr, ‘Let us wed and make children to share our happiness.’ “

Her Mother helped Meyra put her dress on. It was of clean white and azure. Meyra was bouncing up and down. “Hurry, mother, hurry!”

“You need to learn patience, little one.” the mother said and took Meyra by her hand. “Now let’s get your sister, shall we?”
Her sister was all grown up already, a beautiful Cathay as her grandmother always emphasized. She too was wearing a dress, but it was so much more detailed.

It had white tassels with the black image of Alkosh on them, for he is the time, and love was, is and will be in all times. And her sister wore a light blue haze with the image of Khenarthi that was flying in the air just like the goddess of the skies herself. For love is free and irrepressible.

Meyra looked at her sister with glowing eyes.
The three went down the streets to the temple of Ahnurr and Fadomai and on half of the way the future husband of Meyras sister joined them with his family. His dress was purple. On his left arm there was an image of Hermorah for prediction is needed to protect your family. And on his right arm there was an image of Hircine, because a good father has to be a good hunter to feed his family. He, as well, had Mara and Alkosh on his dress for the same reasons as his wife.

The two families entered the temple and the Clan Mother Ahnissi led the bride and the bridegroom to the altar. She took a tie and banded the two together.

She turned towards the bride and said. “Shazita, will you vow to not betray your husband and never lie to him like Fadomai did, so your family will never fall into darkness?”

Shazita vowed and Ahnissi turned to the bridegroom. “Harashur, will you vow to never strike your wife and to not try to limit her love as well as yours, unlike Ahnurr, so your family will never fall into darkness?”
Harashur vowed and the crowd cheered.

Meyra‘s mother gave her some petals to throw on the way the newlyweds were walking on.

“Praise Jode and Jone.” she cheered.
It was late in the evening when they finally stopped walking around the city and Meyra got very tired. So tired her mother had to carry her home and lay her in her bed. Meyra would dream of Khenarthi flying above all of Nirni and watching over it’s children.