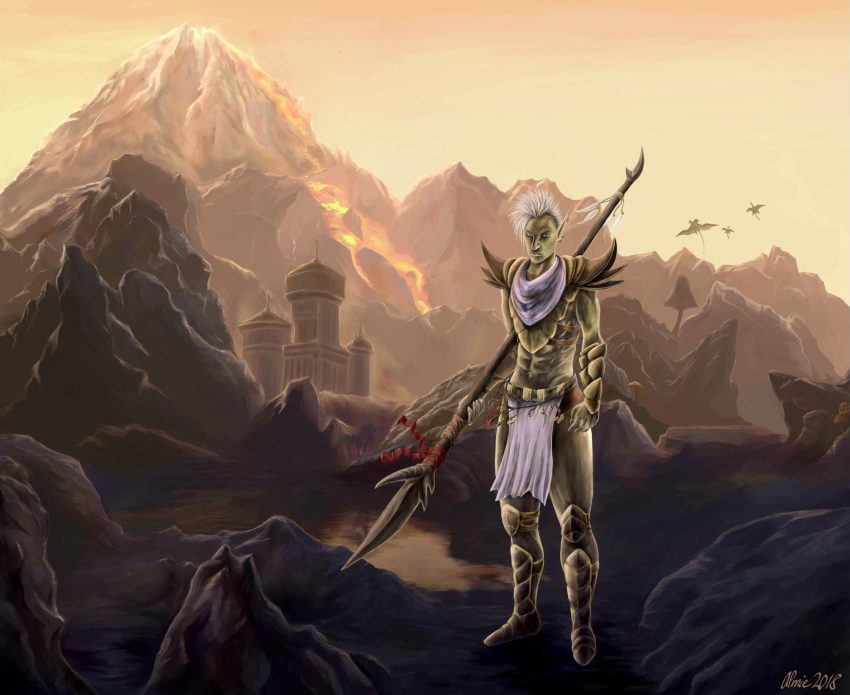 [This final chapter, only a fragment of a long-forgotten book written by an unnamed Dissident Priest, is a fictionalized account of the death of St. Nerevar the Captain and the events following directly after. As is expected of a Dissident, the tale is not presented as the Tribunal tells it, but instead through the belief that the death of Indoril Nerevar was at the hands of Lord Vivec the Poet himself. The reason of existence for this book is currently unknown, though it may have been for nothing more than to pass the time with an interesting story. – Lorius Petrellian, Imperial Archivist of Morrowind Lore]

1e700. Shortly after the Battle of Red Mountain.

The Heart Chamber lay silent, stoic in its resilience to deny that such carnage had just rampaged through its halls. Indoril Nerevar sat with one knee to the red stone floor, measuring his breaths with long, rattling gulps. The burning air tore at his throat, but it did not matter. The bubbling lava, stories below him, sat gurgling deep within the open pit of the Heart Chamber. Nerevar, his aged axe still in hand, put the edge to the floor as if it were a cane to give him leverage. Painfully, taxingly, he rose himself off of the ground, supported by his makeshift crutch.

He could not even bring himself to look at the body. Nerevar knew exactly where it lay – just a few paces behind him, out of sight, and currently out of mind. The Devil. The Sharmat. Dagoth Ur. He also knew there was another body that should be laying next to his – but the Heart had seen to it that Dumac’s body would never exist again.

They had dueled for three days and nights, and it had left him empty in both mind and spirit. Nerevar sighed, a great, deep sigh. One to release years of building tension. His radiant golden skin was stained and dirtied with blood and sweat. The sharp angles of his face hollowed out his gaunt features even more in the harsh light of the Heart Chamber. One of his long, pointed ears was all but gone, torn off by the Devil in the heat of battle.

Finally, after what must have been years, Indoril gained the strength to turn around. The corpse of Voryn Dagoth, later known as the Sharmat Dagoth Ur, lay broken on the warm rock before Indoril. The Devil’s dull yellow skin looked black as night, shaded from the radiant energy that flowed about the room from the lava below. The great golden mask that Dagoth Ur had worn in the end to hide his true face was placed, shattered, beside him. Perhaps he had worn it to stop Nerevar from remembering his treachery. It had been cleaved perfectly in two with Indoril’s sword, Trueflame. The blade did not survive the strike, though, and so the Dwarf King Dumac’s wedding gift that had been bestowed onto him lay in pieces around the body.

Perhaps it had been some irony that it was Dumac’s sword that had been shattered, for he had been the true threat in the Battle. But Dumac and his people were destroyed – erased from time – through the powers of the Heart of Lorkhan. In the early stages of the Battle, when Indoril had to face both the Dwarf King and Dagoth Ur, great Azura, daedric queen of Dawn and Dusk, had come to his aid and helped Nerevar use the Heart to wipe the Dwemer from the world, with Dumac following his people into their bitter non-existence.

Though one threat had been defeated, it was not, as Nerevar had hoped, the end of the war. Dagoth Ur, beguiled by Dumac’s charm and enthralled by the potential of the Heart, turned on Nerevar and the people of Resdayn. He had been corrupted, and only the Hortator stood to stop him.

Returning to the present, Nerevar turned, preparing himself to leave the Chamber. He gathered all his strength to force his broken and battered body across the floor to the way out of Red Mountain. Suddenly, a great flash of light filled the room, blinding Nerevar. He moved his arm to shield his eyes, and when he had lowered it, a cross-legged figure sat, suspended in the air, before him. The Poet’s brilliantly shining face surveyed Nerevar curiously.

“So,” Lord Vivec began. His voice, though quiet, exuded power with every syllable. “It is done. The traitor Dagoth Ur is defeated valiantly by your hand and the fool King Dumac has been erased from existence alongside his people.” A mirthless smirk spread across the living god’s face. “They shall sing about this for ages to come, my dear friend.”

“Lord Vivec,” Indoril replied, straightening himself, gritting his teeth through the pain of the effort, “I am sorry you missed the final clash – it was truly something to behold, but I am sure you were quite busy with other duties befitting your stature.”

Vivec was silent for a moment, his face cold and calculating. “There was a time where I would have rewarded your cheek with an equally cutting insult,” he said dangerously, his glowing eyes flashing with anger, “but, as you are no doubt in the middle of basking in your own glory, I shall refrain from saying such harsh words.”

Nerevar had no time for these trifling matters. Ur had been defeated, the battle was won – the Great Ghostfence was being constructed as they spoke to forever prevent the Sharmat from returning. Resdayn was free from his torment. “My Lord, allow me to pass and we may speak of these dealings when I am better rested.”

Again, silence clung heavily to the Chamber. The heat of the room was becoming unbearable – Nerevar needed fresh air, or else he felt his throat would close forever, never to breathe again.

Vivec lowered to the floor, his bare feet reaching the ground gently, unharmed by the extreme temperature. Not saying a word, he pulled his great spear, MUATRA, from his back. He took one simple step towards the frail figure of Indoril Nerevar, First Councillor of Resdayn and Great Hortator.

Nerevar, in turn, took an uncertain step backwards. “What are you doing, Vivec? The deed is done, Dagoth Ur’s body lies before us.”

“I truly am sorry, old friend. But it must be like this.” MUATRA’s tip lowered, levelling with Nerevar’s chest.