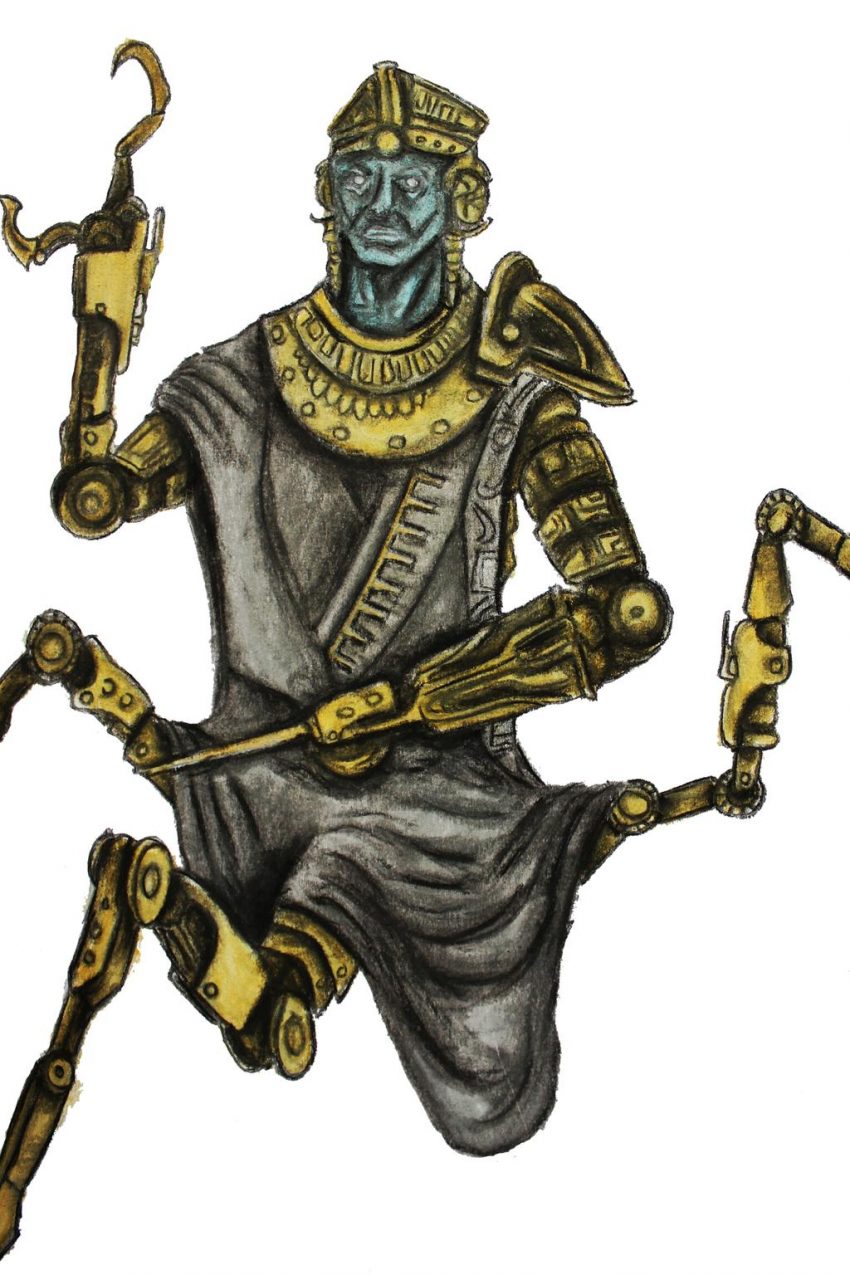 By: Avewyr, former Magister at the Wayrest chapter of the Mages Guild

As I’m sure some of you may know, I had the privilege of leading numerous guild excavations of Dwemer cities in High Rock, Hammerfell and Skyrim where we made countless noteworthy discoveries. It was in Wrothgar in the ancient Dwemer city of Zthenganaz that I found a particularly interesting piece of writing that recounted a hypothesis on mapping time dilations in the uncharted regions of Oblivion. The author was anonymous and the only information I could find was that he was an esteemed Daedrologist. His journal contained the following passage translated by myself:

It is well recorded and understood that the effect and passage of time is malleable in the realms of Oblivion, but as far as we can tell the commonly visited spheres of the known princes maintain time comparable to that of the linear progression we experience here on Nirn. That being said, the same is not true about the uncharted infinite expanse of Oblivion, where I theorize there to be regions that time is not only non-linear but potentially spaces completely separated from time itself. I suppose it possible that by entering Oblivion in the present and navigating our way to one of these zones outside of time (a sort of Timeless Oasis) we could potentially re-enter at any point in the linear timeline of Nirn.

While I thought his general concept was fascinating, I didn’t consider this passage to be any more than just some notes and clever ideas; that is, until another excavation I led in the Reach where we explored a city by the name of Nchuand-Zel and I found another interesting journal, this time credited to a Dwemer named Ralbar Szotarn.

It was the fateful Twelfth expedition into uncharted Oblivion where we brought the largest crew, and unfortunately suffered the heaviest losses. With us came 12 Dwemer Mages, 7 Falmer workers, 5 Dwemer cartographers (including myself), 15 Dwemer mercenaries, 2 Dwemer Daedrologists and 1 Chimer Daedric cultists. At this point we had amassed a small atlas of maps, but the work was proving to be futile as many of the time dilations we tracked from the early expeditions had changed and thus the maps became outdated. Ioradrys proposed the changes could follow predictable patterns, and she may have deciphered a few of them but I fear this only complicates the entire project far too much.

Here we have evidence that this concept was more than just the mere ravings of an overly imaginative scholar, but actually came to fruition in at least a dozen expeditions! In the journal from Nchuand-Zel I also found a series of maps that I and some of my colleagues in Winterhold have been slowly analyzing and attempting to understand. The maps are supposedly of the ‘uncharted’ planes of Oblivion but mapping a region outside of time and in some cases outside of mortal perception is far more complex than simply sketching some topography. I found both of these journals in the same year of 2E 589, and after months of analyzing the maps we concluded that it was perhaps just as futile an effort for ourselves as it was for the Dwemer. That is, until a monumental excavation in Skyrim. The local College of Winterhold was leading a joint expedition with the Riften chapter of the Mage’s Guild into the ruined city of Rkund, and of course they invited me to help lead them. On this particular dig we made some incredible discoveries, but I would have the reader refer to my countless other publications about those findings; for the purposes of this paper there is one particular discovery that is relevant. I found another journal, this time containing a large collection of maps that were strikingly similar to the Oblivion charts from before. Again, the journal was completely anonymous but the writer claimed to be the apprentice of the Dwemer who first proposed the hypothesis that time oases existed in the uncharted planes of Oblivion and could be used to re-enter Nirn at any point in time. She followed this particular scholar on at least a dozen expeditions before she writes that they actually located and mapped the route to one of these oases. According to my translation, she writes:

Our last expedition was the closest thing to a success we’ve had in a long while, and I am certain we have confidently located a Time Oasis! The council refuses to approve any more expeditions after the disaster of the last one, so it’s just going to be the two of us this time. Based on measurements I have been making in Oblivion, I have been working on a hypothesis on what exactly awaits us in this Time Oasis. Firstly: one must understand that as mortals experiencing linear time we live only in the present, but the entire future and entire past exist continuously as well, we just are incapable of perceiving it. From birth to death a mortal’s life is a progression of an infinite amount of points, much like how a line in two-dimensional space has a beginning and an end but contains infinite points in between. From the third dimension looking down, one can perceive the two-dimensional line as a whole object with a beginning and an end but in order to coexist with said line in two-dimensional space one could only exist as an individual point on that line with no perception of the line as a whole. Well I propose that the same can be said about entering four-dimensional space and looking down at three-dimensional space. If a mortal entered one of these time oases then I hypothesize every single point of his existence from birth to death would all be removed from three-dimensional space simultaneously and would all converge into one infinite being in four-dimensional space. While in the time oasis one would cease to exist on Nirn not just at the moment of departure, but also every moment from birth to death. Because of this, returning to Nirn would be incredibly complicated and potentially even impossible for a mortal since a being of infinite points can not simply insert himself into a single point of time in three-dimensional space. It would be akin to a sphere entering two-dimensional space: Only one point on that sphere would actually be visible and interactable to other objects living in two-dimensional space, while the rest of the sphere would simply not exist. The reason a mortal cannot return to Nirn is that a mortal brain cannot process an infinite series of points in time and therefore infinite information to extract one single point and move it anywhere in Nirn’s timeline while replacing the infinite other points of one’s life back to where they belong. If done incorrectly, the infinite points of one’s life may disappear from reality upon reentry into linear time and thus that individual will cease to exist in the past, present and future.

Unfortunately, the remaining few pages of the journal were badly water damaged and the ink was illegible, save for a few words here and there that I translated as: Elder Scroll, infinite storage, immortal processing, Fal’Zhardum Din (I suspect the name of a location, as it translates to ‘Blackreach’), Mzark and lexicon. Of course, with this much information and evidence it was impossible for me to ignore the implications of their research, and I furthermore suspect that the latter author (the apprentice) may have been considering using an elder scroll, since it would have the capabilities to process the infinite and could enable one to reconnect with Nirn’s linear timeline. I think the final chapter of this saga must lie in this “Blackreach”, and perhaps the Dwemer themselves had an elder scroll that would be relevant to solve this mystery of traveling through time and Mundus.