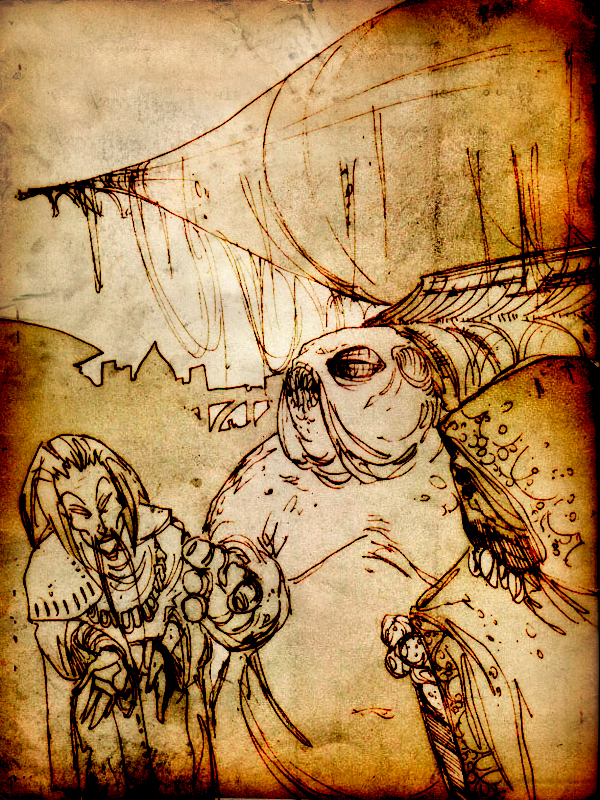 In First Seed 4E23, Wayrest merchant vessel The Eadwyre was lost somewhere in the Sea of Pearls while en route to Firsthold. The entire crew of some 40 souls was declared lost to pirates or storms or worse and chalked up to the regular costs of operating a maritime trade route. However, two years later in Frostfall 4E25, The Eadwyre slowly drifted near the Stros M’Kai port, badly listing with its rigging in tatters and barnacles infesting its rotting hull. Of the original crew, only one survivor was aboard, wild eyed and gibbering, wearing nothing but the rags of his sailor’s uniform.

The sailor was quickly brought to the Temple of Arkay for treatment of his wounds. Besides being badly malnourished the sailor had clearly lost his mind, babbling incoherently while fading in and out of consciousness. More strangely a large crystal seemingly made of salt and perhaps the size of a child’s closed fist was found embedded deeply into the man’s throat. When the crystal was touched, the sailor would go stiff as a board, his eyes rolling back in his head. Eventually, the man would speak, though not in his own voice. A grating and raspy voice would recite the following words through the sailor’s lips, as transcribed by the attendant Priest of Arkay.

“Greetings aspirant. This one is known as K’Arot and praises your foresight in seeking the wisdom of such a potent and affluent Sload. This one is sure that you will commit this vital knowledge to memory for to do otherwise is to invite ignorance and inadequate preparation upon yourself.

In days past Sload would commune directly with the voidborne princes from atop the blessed Pillar of Thras. However, those days are gone with the coming of the Tamrielic fury and the pillar’s destruction. Further lamentations must be made for the poorly planned and disastrously executed attempt by the hasty D’gon to strike at the heart of the Mortal Plane which resulted in the further separation between realms. It is therefore imperative that the vast expenditures needed to reach out to our Obliviant Patrons be made with careful consideration and calculation so as to reap the most desirable benefits for the least cost. This memory-slave will serve as a guide to the mercenary princes of profanity and the best communing choice for every eventuality.

P’Ryte, Leviathan of Planned Plagues: P’Ryte is master of contagion and lord of counts, paragon of things that Sload idealize. With its blessing does the Menagerie of Sublime Infection continue to produce the most virulently pleasing diseases that are spread to the Tamrielic coasts, and it is with its judgement that the plans of Sloadkind may be executed when the situation favors. Truly the visage of a great leviathan is appropriate for so glorious a Prince, and a discerning worm would do well to assuage and appease it.

K’Vicus Vile, Shrewd Eel God of Mercantilism: Bloated with wealth must be the worm who deals with K’Vicus. Its boons are not for polwygles and their ilk. The toll it extracts may be hidden at first glance, and it is an inadequate worm who binds itself into a disadvantageous contract. Its spheres also include the fooling of Tamrielics with displays of parodied emotion, and is a most useful patron to have.

R’maeus Mora, Bloated Prince of Craft: Keeper of the arts and crafts that elevate Sload above the Tamrielic animals. Corpse Speaking, Plague Spinning, Salt Singing, all are crafts that were housed first from the black libraries of R’Maeus before being discovered by the Sload. Mere souls and glinting valuables hold no sway over the Bloat Prince, craftswormship and skill must be given in trade instead.

R’Cine, The Gnashing Depths: A violent and imprecise thing, but useful in its own way. Be wary, for even the most far seeing plan can be broken by the violence of the Biter in the Dark.

M’Lag Bal, The Ruddy Worm: Once the Pillar of Thras reached across the void to scrape against the walls of Coldharbor, and wondrous were those days for Thras. Now, the jealous Bal has retreated from the Sload, though it can still be reached through the fornicant violation of blood and flesh slaves. Once primary patron of the pitiable Dreugh before we cast them from their watery halls and claimed the oceans and their God for our more worthy selves.

N’Mira, Bountiful Lord of Putrefying Plenty: Important God of the Harvest, for it provides Sload with the delicious liquified viscera that we consume. N’Mira ensures that the flesh tides are plentiful and that the slave pens of Thras are rarely empty.

B’Ethah, Covetous Parasite: A blasphemy to Sload if a useful one, for to seek B’Ethah’s patronage is to admit that the Sload are not masters of themselves and their domain. Still, if one is but a vile and pitiful grub without consequence or influence then perhaps B’Ethah can be a useful ally. However, B’Ethah’s blade cuts in both directions, and one can as easily find itself the overthrown rather than the rebel.

Sh’Gorath, The Insane Storm: Be wary to disguise your plans from the Storm of Sh’Gorath, for it delights in nothing more than dashing even the most carefully laid plans against the reefs of chance. Easily appeased by the offering of living slaves driven to madness by lash and magic, but fickle and temperamental.

M’Ridia, Empty Prince of Jealous Beggars: An enemy of Sload and jealous coveter of their craftswormship. The cast off shell of a moulted idea. Weak willed, lamentable, best forgotten and buried.

Other Entities may exist in the chaotic creatia beyond the sky but they are ill worth dealing with for their spheres have little value to the discerning Sload.”

After saying these chilling words, the man would unfreeze and return to his wailing and thrashing with his own voice returned. After 3 days of madness, the sailor finally and mercifully succumbed to death, seemingly as his body desiccated from the inside out. May Arkay shepherd his soul to safer shores.