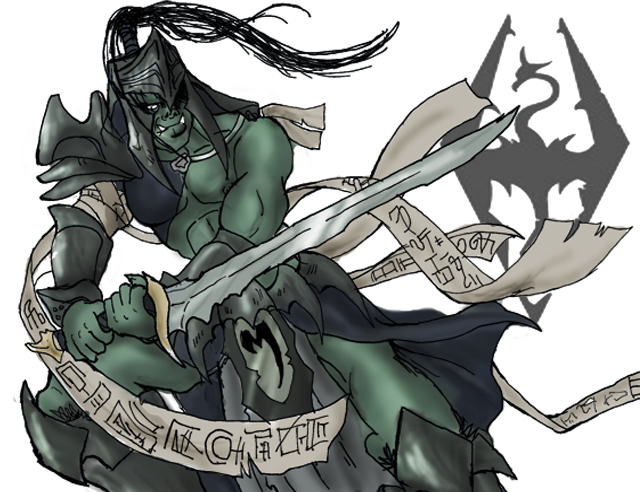 In the time of our forefathers, there was only Aldmer, tall and golden and fair, standing aloof and arrogant apart from the rest. Gods walked among mortals in those days, and our ancestors followed the best and brightest of the Et’ada, the mighty, merciful and wise Trinimac. He was the warrior god of the Aldmer, and all looked to him to lead them in battle.

His followers were hand picked by him, the best, the strongest, the bravest, and they followed him to the death.

One day, Boethiah, Azura and Mephala filled the ears of a naive mer called Veloth with lies and promises, and lured him east to the land that would be Morrowind. Righteous in his wrath, Trinimac called his followers and gave chase, to drag the fool back home.

But Veloth had daedric forces on his side, and Boethiah set a trap, springing upon Trinimac and in one mighty leap, swallowed him whole.

The wails and cries of his followers shook the Magna-ge in the skies, and their grief echoed through the land so strongly that Kynereth herself wept tears of rain over the scene. Those of his forces who were not as strong as the rest turned tail and ran for home, but his truly loyal remained, and saw the belly of Boethiah begin to heave and writhe, the muffled sounds of Trinimac’s fury becoming clear.

The cry went out over the battlefield:

“Our lord yet lives!”

His followers forged their despair into weapons and fell upon Boethiah, the force of their rage and their numbers bringing him to the ground, howling and cursing as swords hacked at his belly. They reached inside the beast as one, heedless of his poisonous bile sinking into their skin, and took hold of Trinimac, drawing him up into the light.

He was Et’ada, and stronger than his followers, so his time trapped within had changed his form little, only a strong, sharp pair of tusks gleaming against his golden skin, yet as he wondered at this he felt a change within him. As though something had been taken from Boethiah in his struggles. He had little time to ponder this, as he beheld his followers. Boethiah’s blood and bile and raging curses had changed them beyond all recognition. They were greenish grey and sturdy, with sharp tusks and little of their Aldmer beauty remaining, and Trinimac beheld them and wept with love and gratitude.

“My children…my bold children. You have sacrificed so much to save me. In your devotion to your ancestor-god you gave your beauty itself. You are the best, the strongest, the bravest of all, and I am proud to call you my followers. Let us return home and I will tell our kinfolk of your sacrifice, and they will honour you above all others.”

But not all tales have happy endings, and not all outcomes are just, for Boethiah had slunk away from the battle, injured and angry. He limped back to the Aldmer homeland in disguise and whispered vile and disgusting lies, and when Trinimac and his followers returned home his people turned up their noses and turned their backs, seeing only ugliness and not the love and loyalty of their sacrifice. For the elves are petty and shallow, and see worth only in the outer shell, and not what lies within.

And as Trinimac beheld this betrayal, he felt only fury, and the strange new power within him grew. His golden skin became grey as ash, his eyes became as the fire of a forge, and the rage of his bellow slew a host of Aldmer where they stood.

In that moment of fire and fury he took on the shape of Malacath, and struck about him with his great sword Vosh rahk. And when his rage was spent and those elves who had not fled lay dead, the ash fell off his skin and he was gold once more. And he spoke:

“Now I am become Trinimalacath.”

So Trinimalacath took his people away to the North where they could be safe, and he could guide them. But the winds of time scattered his people, and many forgot the truth of him, remembering only one aspect of Trinimalacath, the Two-In-One.

But we remember. We in Orsinium know the truth. That without Malacath’s strength, we are weak, and without Trinimac’s honour, we are savages. Ours is a legacy not of isolation and grudges, but of loyalty and sacrifice. We are Orcs.

Of this fact, always be proud.

In the name of the Two-In-One.