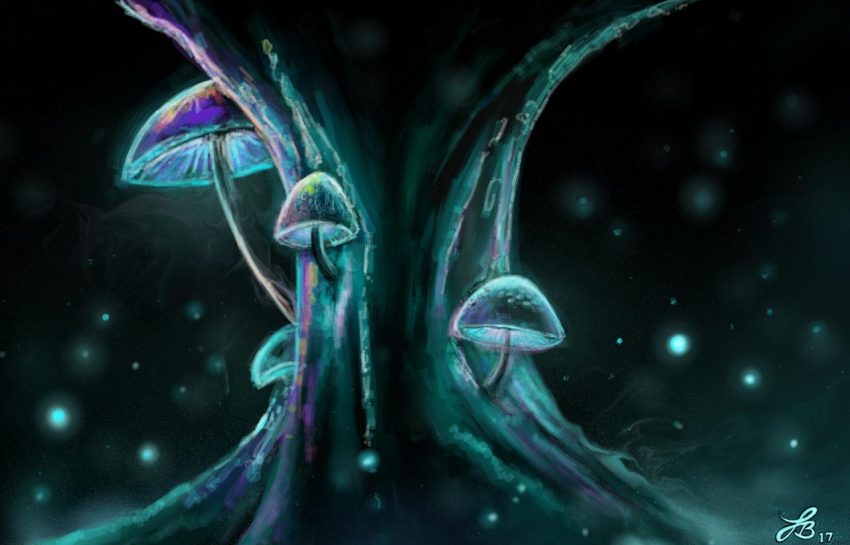 A rather peculiar fungus endemic to the cave systems of Skyrim, it interestingly has no specific name. I encountered a group of hunters during my travels through the Pale, who referred to it as “Falmercap”, but this seems to be a rarely used name. Glowing mushrooms are poorly understood and little studied due to the hazards of the caves they grow in, and thus required a lot of original research on my part.

A luminescent, translucent, turquoise bracket fungus, exhibiting a small frond that then grows to tendrils that extend from the cap margin. Sizes vary with age, from juveniles less than half an inch across, with the oldest specimens spanning up to 7 inches across. The fruiting body is initially unlit, but begin to luminesce as the fronds enlarge. Full brightness is achieved at maturity when the cap is about 4 inches across and the tendrils are approximately 5 inches long.

The Glowing mushroom is only naturally found below ground, typically deep within caverns. They favour damp habitats with high humidity, and thrive in low light levels. They are usually found affixed to cavern walls, usually in places where nutrients seep down from fractures in the rock above. The stable temperature and humidity of these subterranean locations often means that the fungus can be found with other species of fungi as well, since the glowing mushroom occupies a specific niche in the ecology of such caverns, they are not territorial and will tolerate the presence of other fungi.

They do demonstrate an affinity for magical locations, and thus it can be assumed that higher than average background magicka is prefered.

With a complex and highly specialised biology, it is hard to know where to begin with discussing the Glowing Mushroom.
Interestingly, unlike most fungi, its fruiting bodies begin growing almost simultaneously with the mycelium structure. Due to the hard rock it typically lives on, the fine, transparent mycelia spread out over the surface, sometimes using algaes as an anchor and nutrient substrate, in locations closer to surface.
Once the fungus has established that anchor on the rock, it begins to produce a fruiting body – this is not initially for reproductive purposes, but instead they develop a small bean sized mass in which they store nutrients. As the fungus grows, the mycelia usually stop about two feet from the central growth.
At this point, the fungus starts developing tendrils from a frond along its margin. The alchemical processes within the fungus start producing light, and the gills expand to accomodate spore production. The tendrils then begin to take over from the mycelium as the main source of water, as experiments demonstrate that they begin drawing in water from the air around them.
The fungus metabolism suddenly ramps up as it enters the reproductive phase, this occurring approximately 3 months after the initial spore germinates, with the fungus luminescence reaching its peak. Tests indicate that the fungus rapidly draws on local magicka in the environment during this phase, and shortly afterwards the gills open to reveal their spores.

It was at this point where I considered why precisely the fungus luminesces, and during a field trip, I witnessed what I presume is why – Moths.
During winter months in Skyrim, the moth population retreats below ground to lay their eggs and overwinter, as the temperature never drops below freezing. It is at this point where the moths encounter the luminescent fungi, and when they come to investigate, trigger the sensitive tendrils which release clouds of spores onto the unsuspecting moths, who then go on to colonise other caverns with the fungal spores in their hairs.
Falmer and Chaurus also seem to be potential vectors, as the spores are very small and hardy, sticking to most surfaces. This would explain the prevalence of the glowing mushroom in areas populated by the Falmer and their livestock.

The fungus is often used to prepare a tincture to enhance the skills of blacksmiths, lute players and has been employed in more recreational uses – the reason being is that the fungi have a cocktail of receptive essences in the tendrils. In the fungus, these essences provide the trigger to release spores when something brushes against the tendrils. In most men and mer, these essences greatly increase the tactile receptiveness of the hands, making it ideal for delicate work.
Isolating them is quite easy, but requires a soft touch – the tendrils must be cut from the fungus carefully, and left in strong alcohol to steep. Avoid heating strongly, as this denatures the essences.
The fungus also demonstrates interesting regenerative properties – older specimens show dark patches where they have been damaged, but have repaired the surface near perfectly. This toughening agent is found throughout the flesh of the fungus, but must be extracted by soaking in icy cold water for several days. Quicker methods do exist, but with far lower yields, as you activate some of the toughening agent, wasting it. The extract can be ingested for a general boost to your resilience, or applied topically to bruises and grazes.

It also displays a few other curious properties: during my consultations with mages from the College of Winterhold, one colleague of mine mentioned how stable the magickal fields were near these fungi.
Further experimentation revealed that they actually moderate the tonal environment about them, absorbing or releasing excess magicka to ensure a steady background level.
3 weeks of experimentation and further consultation revealed some strange results – the fungus does not actually benefit from this property, but neither is it disadvantaged. A series of internal alchemical mechanisms within the glowing mushroom’s metabolism allow for it to act as a capacitor, eliminating local spikes of magicka – isolating this specific essence renders one partially resistant to shock based magics, protecting the user’s natural magicka reserves.
Another component of this strange biological mechanism is an agent which focuses the magicka – normally this magicka flow is dumped into the fungi’s luminescence, but Mages specialising in destruction magics, which normally require a high throughput of magicka, can utilize this alchemical agent to stabilise the flow, reducing losses and improving their control.
So strange was this mechanism that I actually found myself writing to Calcelmo, the foremost expert on the Dwemer in Skyrim. The running hypothesis we developed, though unconfirmed, is that the ancient Dwemer modified the existing fungus in order to calm the tonal disturbances in Blackreach, where the Dwemer were extracting some mineral called Aetherium.
Calcelmo told me that Aetherium is harmonically volatile, and up until now, he had no idea how the Dwemer had managed an extraction operation as large as Blackreach without risking the catastrophic consequences of the Aetherium’s volatility.