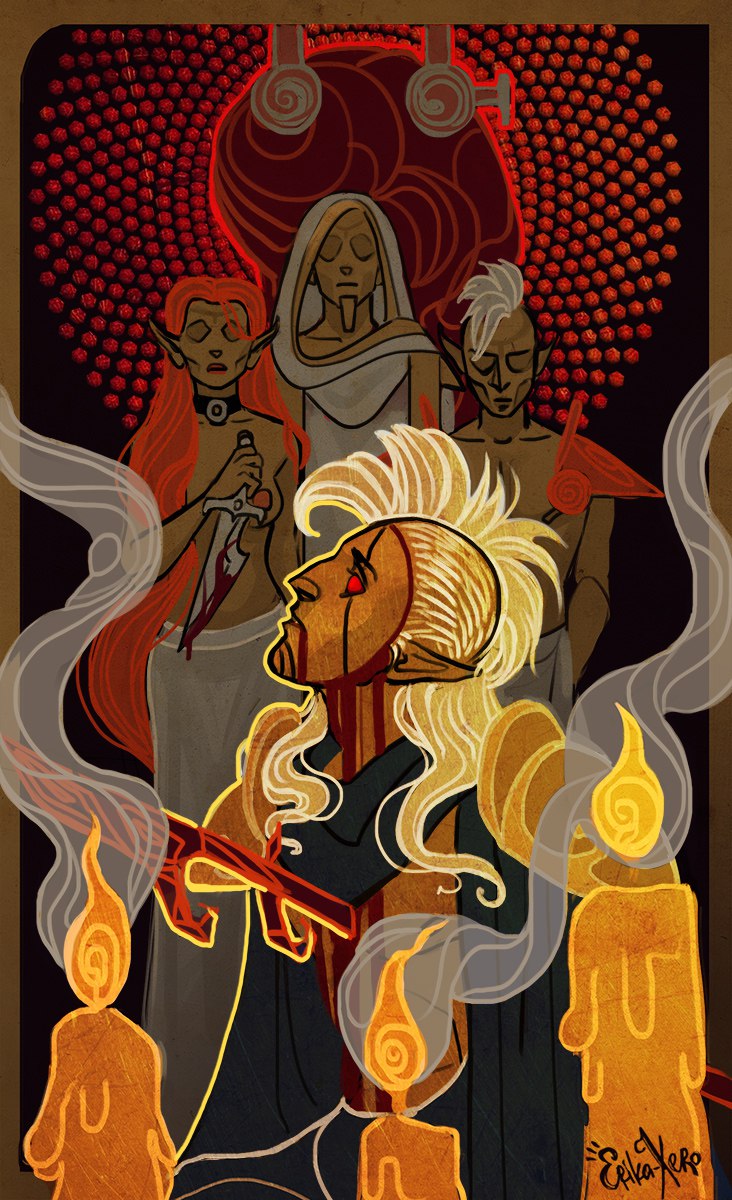 [Upon further examination, it is evident that many of the facts and story beats presented within this story are, as accepted Morrowind history goes, incorrect. While Indoril Nerevar’s death is shrouded in mystery, there are other points of contention that the author has clearly ignored or dramatized. For example, Voryn Dagoth should not be known as Dagoth Ur at the time the story takes place, nor should he (most likely) have his signature golden mask (nor was it, as far as is known, broken at any time). It remains to be seen if these changes are deliberate in order to appeal to the average reader or if this particular Dissident Priest was not as well-learned in the lore of his people as he or she believed. Fellow scholars have also pointed to these inconsistencies potentially being the result of a Dragon Break, but others balk at this possibility as it explains everything “too easily.” – Lorius Petrellian, Imperial Archivist of Morrowind Lore]

“No!” Croaked Nerevar, spreading his arms in front of him in defense, still wielding his axe. “You can’t do this!”
Vivec’s face was barren of emotion, his shining golden skin lined with the rewards of past struggles. “It is for the good of Resdayn and it’s people. You know this as well as I do, Moon-and-Star.” he closed his eyes in solidarity. “The commoners need the strongest of our kind to lead them. Only the Triune can be such rulers. The time of the Daedra lords is over.”
Nerevar’s vision swam before him, the unbelievable sight of MUATRA threatening him, Vivec being the one to hold it. “The people need their Hortator and Councillor – I am the one the Chimer have rallied behind time after time!” Indoril’s voice cracked.
Vivec, his eyes still closed, shook his head and took another blind step forward. “Indoril, you are ignorant of the truth. The power that lies in the Heart of Lorkhan must remain under Tribunal control. To have another that the people see as a true leader such as yourself may…” Vivec paused in his advance, his eyes still shut firmly closed. “Complicate things.” Another pause. The only movement in the entirety of the Heart Chamber was the slow churning of the lava deep below.
“You say,” Nerevar began through gritted teeth, his head bowed, eyes closed just as Vivec’s were, “that it is the entirety of the Tribunal that must rule Resdayn. Then that means that she -”
Vivec’s eyes flashed open and widened in surprise. He shook himself to gather his bearings and, with a dead smile, said, “It is not often one catches a god as out-of-sorts as you have, Hortator.”
Nerevar’s eyes opened, meeting the Warrior Poet’s, beloved hero of the Velothi people. Indoril could not help but give a sharp, barking laugh. “My own wife, then? Almalexia herself has agreed to my sentencing? It is true, what they say, then – “AYEM AE SEHTI AE VEHK!”” The heat was truly oppressive now. Nerevar felt half-crazed as rivers of sweat poured from his face. But he realized amidst his laughter that it was not just sweat, but tears mingled with them down the lines of his face.
Vivec, for what must have been the first time, felt truly sorry at the current circumstances, or at least in his infinite cleverness managed to make it appear so, his face creased with sadness. “You were, truly, the best of the people of Resdayn. But, unfortunately, it is not the people that should rule. Nor the Daedra Azura.” MUATRA moved closer to Nerevar but Vivec’s body did not follow it. “Her reign shall end with yours.”
Indoril followed suit, taking a wary step back, nearing the edge of the lava pit. All Nerevar could register was the heat, overwhelming him. His laugh had died some time ago in his throat, but he knew not when.
The Poet’s eyes closed slowly again, the grip on his spear tightening, the leather creaking under his long, powerful fingers. He breathed deep, holding it in moment after moment, almost as if this was the Poet’s own form of self-punishment.
It happened in the span of a sharp intake of breath. MUATRA flashed forward, bursting through Nerevar’s intricately carved and enchanted bonemold armor like netch skin.
The first thing to fall was Nerevar’s axe, meeting the floor with a harsh clang.
Indoril Nerevar made no sound as he died. He hung, limply, from the end of Vivec’s great spear, his head slumped backwards as in a shout to the sky it could not see. “The ending of the words,” murmured Vivec, eyes shut piously closed, “is ALMSIVI.”