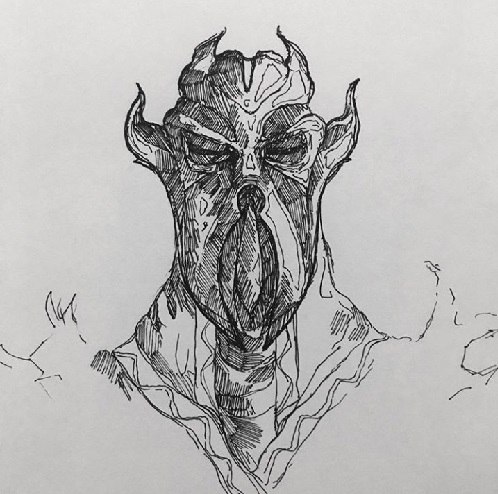 First Report to the Empress of Kalddom in Yokuda, with the unconditional support of the College of Winterhold; Sister Luftwhad, The Dragon Road and HellStorm. Any reading of this document without prior authorization to the Ebony crown is highly punishable.

Although I can boast of being the most qualified person for my previous research in the branch of Aedra/Daedra influence in mortals having studied the most abundant in Nirn for over a hundred years, it is worth noting that several of the conclusions presented below They come with their previous experimentation on live and intact specimens in most cases and I appreciate the legalization of such practices for academic purposes to their eminence Christina and Galardiel Kaldvär for their interest, influence and funds provided in my research.

The countless vampire clans of Lord Bal and the abominations of Hircine do not seem more than the tip of the Iceberg on the road that was opened by the knowledge of Oblivion and Aetherius.

Starting with the line of the Father of Corruption, I discovered traces of a pure Clan dating from 1E. Similar to the altrurist Cyrodiil circle in political aspects but rooted in appearance to every relevant military, academic or political aspect of our times. Although their interests clash frontally with Kalddom’s goal, no one can know the outcome of this impending coalition until both powers meet face to face. A man member of this Blood Order who identifies himself as the Anonymous Knight, revealed to me the identity of his Matriarch. Viera Beolfag, presumably the first Kindred who in the not too distant future, will surely enter into a war or peace agreement with Kaldvär; Although these matters of political power are not the object of my investigation and the knowledge of their hermetic order is pure speculation without having the opportunity to examine closely a living specimen bearing such an ancient lineage. Its headquarters, according to the Knight: all Tamriel.

Although the influence of Kalddom was not enough to find a specimen in shape, I managed to analyze a blood sample from that only known member and although it was not enough, it yielded very interesting data in the tests.

The first thing that comes to light in this lineage, which is called Dovahilic, is that, in effect; It contains oedic essence, although I don’t know if I have an isolated or general case in the bloodline.

The specimens II – XI granted by the Division of the Voice of a Army of Kalddom are worth the life of each one of these Nordics, that although it does not contain the direct favor of the Akatosh, light similarities ignoring clear, all vampiric trace.

In essence, this gift of time gives the bearer control over the one known in Tamriel as Thu’um, the Dragon language. Although there are records that date from the Merethc Era of this discipline, by loud voice of the legendary Atmoriamos and the Dragon Cult, which evolved in multiple aspects such as Tongues , The Way of the Voice, The Division of the Voice or the Way of the Dragon, it must not be attributed under any circumstance that any connoisseur of said language or capable of issuing Thu’um, the fact of possessing the direct gift of Akatosh; the assumption, apparently, gives Aedric Soul of these creatures to a mortal body, although this conjecture is too risky because no one had a Dragonborn as a research specimen.

These beings called Dragonborn’s, are the same as the Alessian and consequent empire certifies for the monarchy, returning to this Empress the Dragonborn par excellence, granting the coming empires credibility to fulfill this line, religiously, traditional and politically speaking.

The Thu’um in essence is nothing but projecting the voice, commonly in the form of a shout to generate a kind of magic far from the classic. A less intuitive and elaborate one, dictated more by the etheric essence of the user, or in other words: by his soul and the control of this seemingly unstoppable energy.

The effects of such practice alter reality depending on the cited word and its vibration, which can generate vacuum currents with enormous force, generate ice storms or crystallize in the same element where it is directed. However, it would not be an exaggeration to conclude that the study more focused on Thu’um could develop its full potential with results as varied and multiple as the user’s self-control and imagination. Emitting rains of fire like the mythical aedra is just a futile example that suggests that the limits are the language itself and its understanding.

However, to conclude that the Dovahilic are the missing link between the pure line favored by Lord Bal and the divine right to govern, would be a wrong reasoning until some other specimen that shares blood is analyzed. However, his insight in predicting the use of this valuable resource in the coming wars in favor of Kalddom has been most successful. Regardless of this, the aforementioned test object or any other genuine Dragonborn or Dovahkiin, would undoubtedly be an even more valuable element or, at least a way to expand the academic knowledge of this Akatosh Gift.

End of the report.