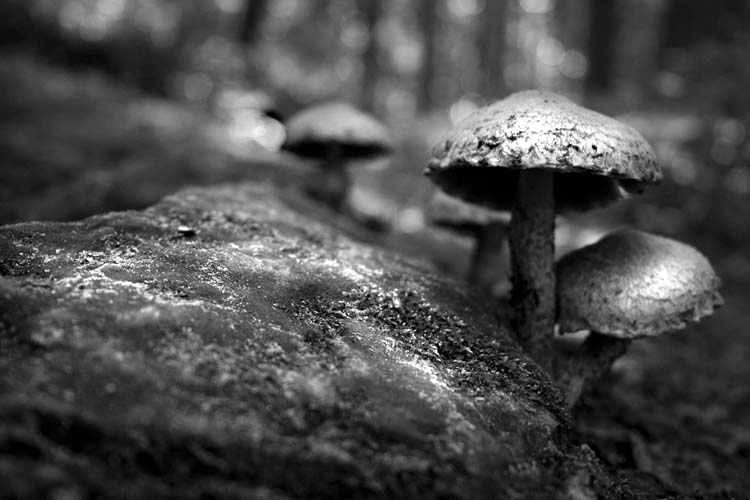 A well known and much reviled fungus found throughout Skyrim, its name comes from its association with the Daedric prince of decay and consumption of the dead, Namira.

Indeed, this name is well earned, as the fungus proliferates wildly upon decaying bodies. Travellers will often encounter large patches of Namira’s Rot and will harvest from them without knowing that they dig their hands  where a corpse or two once decomposed.

A beige capped bolete that develops a set of brown scales on its cap as it matures. Juvenile caps appear shortly after the mycelium has established itself in its substrate. In height, they measure from a quarter of an inch to a full four inches, across most mature specimens. The caps are supported by a relatively thick, creamy white stem, although discolouration may occur due to contamination from the substrate. Upon ripening, the pale grey gills open to release clouds of miniscule grey spores, which stick to everything they touch.

Namira’s rot is a highly adaptable species, although it prefers to grow in damp and often dark locations. It often establishes itself on rotting corpses within caves, trenches, hollows and other sheltered locations. It does not tolerate wind or frost, though it can cope in colder climes for short periods. Direct sunlight stunts its growth, and excessive exposure will kill a colony.

Common locations to find large growths are in bear and wolf dens, thick woodlands with activate predation, and often throughout the sites of battlefields, a few weeks after the bloodshed. This species is prevalent throughout cave systems in Skyrim, due to the nature of its reproduction, and is predominantly found in the Rift and eastern regions of the Reach.

The study of this species’ biology was something of a grisly task, and one of the most unpleasant experiences I have ever had to undertake. The fungus almost exclusively feeds off of decaying corpses, and has learned to adapt by breaking down bodies in a most efficient manner.

The mycelia are quick to take root after the introduction of spores to a corpse, however the speed of their germination is directly proportional to the state of decay the host body is in. Through experiments involving two dozen deer carcasses, I have determined that the strongest growth rates occurred when the spores were introduced at the point where black putrefaction occurs in the corpse – approximately ten days after death. The slowest growth rates were observed in fresh bodies, with a germination time of four days after introduction. It can be assumed therefore that the body needs to begin to decay before the germination conditions are sufficient.

The mycelia establish themselves in layers throughout the body, first developing a horizontal layer before growing deeper into the flesh. Muscle and bone is largely left alone until later stages of decay, before which the fungus concentrates its growth in the viscera, breaking down the internal organs.

Upon reaching reproductive maturity, the fungus starts sprouting caps from the surface of the corpse. These rapidly swell to full size within ten days, and the fungus can fruit dozens of times in a year, making it a highly productive fungus for alchemists to cultivate, provided sufficient substrate is available.

The fungus demonstrates a unique mechanism by which, I deduce, it facilitates the spread of its spores. During the initial fruiting stage, the fungus produces a low level of pheromones which induce fear and anxiety. This persists until the fungal caps have reached fruiting maturity, at which point this pheromone release abruptly stops, and the pungency of the decaying body is greatly increased through metabolic activity of the fungus. I hypothesise that the initial period of pheromone production is to protect the immature caps from being disturbed by detritivores and scavengers. Upon fruiting maturity, the decaying scent is increased to now attract the same creatures it was previously attempting to repel.

The fungal spores sit very loosely in the gills and are easily dislodged by a forager such as a bear or wolf, who typically feed off carrion, and are often responsible for dragging these corpses into the caves where Namira’s rot is found.

Bruising the caps is very easily done at this stage, especially by an animal feeding on the decaying corpse. The bruised fungus then releases powerful pheromones, far more concentrated than before, to induce extreme fear and panic into the creature who was feeding on it, which apparently can include even Falmer, from one report I received. The terrified animal (or falmer), now laden with spores will then flee, carrying the spores afield to infect more corpses in due time.

With a rather puzzling set of alchemical properties, it took time to unravel how these effects arose from the complex chemistry and biology of Namira’s rot. The fear pheromones were relatively easy to isolate, using gentle steam distillation to extract them from the fungus caps, particularly from the gills.

Interestingly enough, the effect of improving dexterity and concentration (often for potions used by jewelers, surgeons and dare I say it, thieves who specialise in lock picking) is not a single essence, but a combination of essences from two sharply contrasted functions in the fungus. The first essence greatly increases concentration due to a neurological response to the pheromones released by the gills. This essence creates a ‘tunnel vision’ effect, which makes the affected individual, in combination with their fear pheromones, want nothing more than to flee the vicinity as soon as possible.

The second set of essences reacts in a similar way to the mechanisms found in other touch sensitive mushrooms in that they act as a signal hormone that triggers the gills to widen. This allows more spores to fall out which increases the chance of successful reproduction.

Extraction of both, serendipitously, involves immersion in wood alcohol for several hours.

It is advised to ensure this is as strong an alcohol as possible, as the extract can easily cause lethal food poisoning due to contamination from the fungal substrate, and boiling the extract unfortunately renders it useless.

There is also an internal fluid present through the entire fungus, that exhibits strong regenerative properties. I assume it is this agent that is responsible for the rapid fruiting cycles the fungus exhibits. Extracted through the use of a basic press, a sustained heating at the boiling point of wood alcohol (no hotter) for three hours is sufficient to sterilize it, although I would advise the addition of some alcohol to be certain.

The final piece of the puzzle was its anti-magickal properties. After an initial meeting at the college of Winterhold, followed by a few months of angry correspondence*, it was determined that a subset of fear pheromones, which would normally be destroyed by the steam distillation process, was present. These specific fear pheromones attack the region of the brain responsible for controlling a person’s personal store of magicka, which may lead to spastic, involuntary releases of magicka. In a concentrated form it can deplete even a well disciplined mage’s store of magicka quite quickly. Extraction and isolation is quite difficult, and requires strict temperature control and use of reagents which are beyond the scope of this book.

* Author’s note: It is strongly advised that anyone attempting to cultivate this fungus should ensure that they, and their associates, have both an unwavering interest in mycology and an iron clad stomach. Unfortunately, in my case, my colleagues at Winterhold had neither the former nor the latter. Upon opening my sample box to show them one of the specimens I had cultivated, the smell resulted in several individuals almost immediately losing their breakfast. Following this, I was issued with a year’s ban from the College’s Arcanaeum, as well as threats of my being torn apart by Atronachs. A hefty compensation was required to clean the carpets and restore a first edition copy of a book on Dunmer ash magics that was being read on the other side of the room at the time. The smell is no joke.