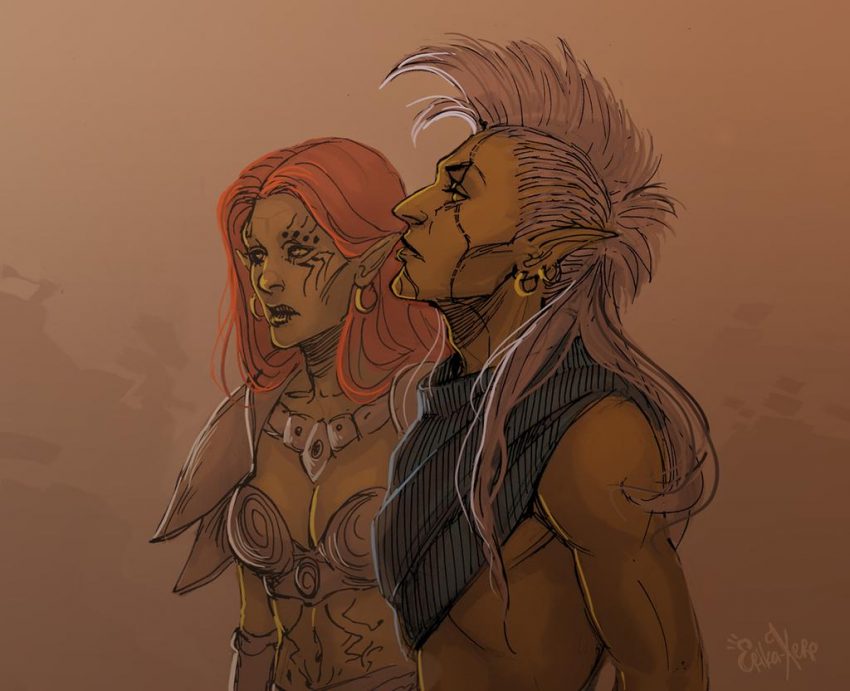 [This is a particularly contentious passage as it distinctly goes against even the beliefs of fellow Dissident Priests. The encounter told below appears to be completely fictionalized as there has been no record of any such events occurring directly following the death of Indoril Nerevar. It is believed that this part of the novel was created to add drama and build to a more “satisfying ending” to the narrative. What is even more odd is the clear empathy the author has for Vivec yet the obvious disdain they hold for Sotha Sil and Almalexia. Perhaps this could point to the true identity of the author? In any case, their identity still remains a great mystery, and may perhaps be nothing of import. – Lorius Petrellian, Imperial Archivist of Morrowind Lore]

Vivec wiped his shimmering brow, which he had only just realized was brimming with sweat. Only now, after the vile act was finished, did he open his eyes. MUATRA hung there, suspended in space, unmoving, resolute. The corpse stuck to the spear like it had always been designed as such, nothing more than a simple bobble attached to the spear, won in some conquest from ages past.
He did not expect this to have been so difficult. True, the act did not require much physical effort, but the effort on the mind – Vivec felt hollow, as if his entire existence had led to this point and now there was no reason to continue on. “Goodbye, Moon-and-Star. Your people will remember you for eons to come.” Vivec whispered solemnly. He stood there, head bowed, smothered in silence for minutes on end.
“So,” a voice behind him said suddenly, “it is done, then.” Vivec turned, summoning MUATRA back to him, which passed soundlessly through Nerevar’s body, the corpse landing on the ground with a sickening thump.
“I have no need to speak to you, Sotha Sil,” Vivec said, rushing past the newcomer, head down, disgust pouring out of every syllable.
“I need only a moment,” Sotha Sil, the Clockwork King replied, holding out a metallic hand to stop Vivec from passing. The wizard was half-covered in mechanical devices that whirred and clicked with every movement of his body. Though one could not tell, his robes hid ever more metal that was grafted onto his skin.
“Then spit it out,” Vivec growled savagely. He had no desire to remain in the presence of his fellow conspirator. A pause sat between them as Sotha Sil remained silent. “The mastermind behind this entire operation did not even deem it worthy to come, then?” he added.
“Almalexia,” Sotha Sil began in an almost bored voice, “will be arriving shortly, do not worry. I only needed a moment to…” he trailed off, his gaze reaching the body of Nerevar on the hot stone floor of the Heart Chamber. Though the rocks were burning, the room felt cold.
“Needed a moment for what? To make sure I had done the dark deed?” Vivec shouldered MUATRA. The weight of it felt good in his hand. “I assure you, Magus, it is done and it is done efficiently. Nerevar walks this world no more.”
Sotha Sil nodded in approval, not daring to meet Vivec’s burning glare. Vivec turned his back on the sorcerer king and moved towards the dead Hortator of Resdayn.
“It is for the greater good, you understand, Vehk. The people of Resdayn will be happier under our complete rule.”
“You think I had not already explained this to the one we just conspired to murder? I know this, Sotha Sil, you need not repeat it to me.” the Warrior Poet snapped. He was feeling particularly hot-headed.
“AYEM AE SEHTI AE VEHK,” Sotha Sil intoned.
A moment’s hesitation as he gazed upon the corpse of his friend, and then, “AYEM AE SEHTI AE VEHK,” replied the Poet, whispering, his lips barely moving.
In their moment of shared silence the pair could feel a presence behind them. She had arrived. The final point of their triangle.
“Almalexia,” Vivec snarled, his voice low, dangerous. He whirled around to face her. She stood, emotionless, robed in her most regal attire, her flaming red hair set royally above and around her flawless golden skin which was marked with waving, delicately designed tattoos. “So, you have only arrived to see that the deal has been carried out, but neither of you,” he turned to face both Sotha Sil and Almalexia, “believed it important enough to see the act carried out itself.” he spat onto the floor, the saliva evaporating on contact with the burning stone floor. Vivec could feel no heat emanating from the room.
The silence between the trio filled every shape, every crack of the gargantuan chamber. “Nothing to say, then?” Vivec began. “No tears to spill for your late husband?” Almalexia did not reply.
Again, Vivec turned away, back to Nerevar’s body. MUATRA shifted to his back, and, bending down, more carefully than he had ever done anything in his life, picked the broken corpse off the ground. Nerevar was heavy, but Vivec relished the weight, the feeling. This would forever be a reminder of the atrocities he committed today. But it was for the good of Resdayn, was it not? From this day forth, the ALMSIVI would be the most powerful beings in the land. Surely one man’s life was a small price to pay?
Vivec could not find the answer within him.
Slowly, he passed Sotha Sil and Almalexia, both of whom stepped gingerly aside to allow Vivec and his penance exit. Vivec walked forever on, out of the Heart Chamber, deep within Red Mountain, and finally out into the open air of the Ashlands before him. It was night time. Vivec could not remember if it had been day or night when he entered the mountain.
All of Vvardenfell lay before him, washed in beautiful moonlight. Beyond the ashen wastes lay towering mushrooms teeming with life and light. Moss mingled with trees and great swamps gurgled and brooked. Just beyond, at the distant southern shore of Vvardenfell, Vivec could make out the two cantons that had been constructed in recent years to honor him. Beyond the narrow strip of sea he knew lay Mournhold, Almalexia’s own home. Secunda and Masser, the two vibrant moons that hung over all of Mundus, shone extraordinarily bright. Perhaps it was so the entire world could see what Vivec had done.
Lord Vivec had never truly understood just how beautiful his homeland was until he realized that Indoril Nerevar, his truest friend, would never again be allowed to look upon it.